A couple weeks ago, my friend Cori sent KayTar a little package for her upcoming hospital trip. In it, was a Groovy Girl with blond curly hair and a spare outfit (and surf board!). KayTar was thrilled with the doll, whom she promptly named "Luke", and agreed when I told her we couldn't open the spare clothes until we were at the hospital. This was how I told her "Surprise! You're going back to the hospital!" It turned out to be a good way to break the less than stellar news, because after school that day (and subsequent days) she would say, "Can we go to the hospital NOW?" I should be in PR, I think. If you can sell a hospital trip to a three year old, you can sell just about anything.

Here she is opening the gift and reading the accompanying letter (she has trouble following the lines sometimes, but did NOT want my finger pointing assistance):

Photo and video editing at www.OneTrueMedia.com
****

My mom has been making KayTar her own little stylish hospital gowns. We've picked up princess fabric and fairy fabric and all manner of fabrics that ooze the girliness my girl is so drawn to. She is quite thrilled with her new gowns and might be even more excited that they are called gowns, "Just like a princess!". 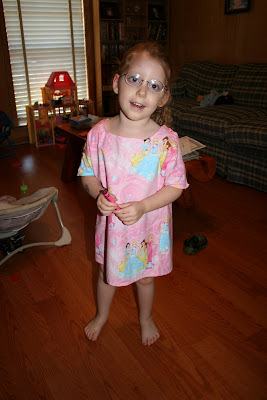 (just in case you ever need a tiny hospital gown pattern, there is a free one HERE. though, we discovered that the neck hole was a bit too big and needed adjusting and we opted to go with non-velcro sleeves.)

KayTar has informed me on multiple occasions that she is NOT going to the Girl Hospital, but rather the Boy Hospital. This is the sort of thing that happens at the Boy Hospital:

Yes, she would like to have her surgery at Sacred Heart.

Today I decided we might be overselling this whole hospital thing; new toys, new clothes, the cast of Scrubs...so this morning we sat down and talked about things a bit more.

She's going to get another Straw in her hand (IV). She looked a little less than thrilled, but she said, "Can the bandage be PINK? I wike pink."

The doctors are going to do something to her throat while she is sleeping to keep the frogs out, a frog trap if you will. It will make her throat hurt, but hopefully it will be the last sore throat for a long time. When she gets throat infections, she always says, "I have a frog in my throat." so that was the only way I could think to explain it to her in an understandable way. No, there are neither frogs nor traps involved, but if frogs are painful throat infections to her, then no more tonsils should be the equivalent of no more frogs.

I pulled up photos of g-buttons on the Internet, to show her what an extra belly button looks like and how it works, kind of like the Straw in her hand, but it puts the food right in her belly. She laughed and said, "Can I say, 'yum, yum, yum'?".

Then I told her she'd be getting stitches in her leg like her brother did this summer. She isn't too keen on this part, because she says stitches are "Too spidery." But I told her we can keep them covered up mostly.

Her surgery is a noon tomorrow. No Pediasure or food after midnight tonight, no clear fluids after 8:30 tomorrow morning. We have to be at the hospital at 10am. 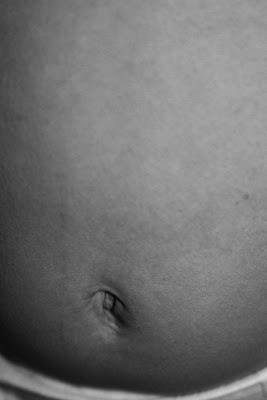 will be thinking of you all nonstop.

I've been thinking of you guys today. I am glad KayTar is taking the hospital trip so well. I love the video of her opening Cori's gift.
We'll be praying for you guys tomorrow. HUGS!!!

You've done such a wonderful job preparing her for this.

I'll be thinking of you and praying for her tomorrow.

Thinking of you here in MA.

Thinking good thoughts for you - and yes, you're doing an awesome job of preparing her.

As one of my hippy friends used to say, Healing hands to you! Holding you in my thoughts.

Oh, Mama. I can't believe it's already here. You and your precious girl are in my thoughts... Hang in there, kiddo.

I think you've done a superb job of explaining all this to KayTar in ways that she can understand. And I'm not at all surprised at how sweet and funny she is being about the whole thing.

We'll be praying for Katie!

I will be waiting on pins and needles to hear that all is well. Just think about the fact that so much of the blogosphere will be holding your hand and KayTar's hand tomorrow.

I will be praying for you tomorrow....

I'm glad that Kaytar is taking the news of the hospital stay so well!

i having v=been thinking of you and that sweet belly. i am sure it will all go well.
xoxo

She sounds ready, thanks to you.

Oh, wow. It's all come so fast. You're doing a great job preparing her. Thinking of you all...

She is a dear. All the best.

Oh, you guys. Her poor little belly... her poor mom. I'm praying for both of you.

I've been thinking about you guys constantly this weekend. Good luck!

Kyla, you're so GOOD at this, at making it less scary, at keeping it real, at carrying the cognitive and emotional load on everyone's behalf. I'll be thinking of Kaytar, but I will, also, be thinking of you in the ocming days.

Making your own cute hospital gowns -- what a great idea! Your mom is awesome.

Will be thinking of you tomorrow.

God bless all of you! Good luck.

What a sweet baby girl! I showed Super Dad that she could READ the letter we sent. He was BLOWN AWAY!
We will be praying for you.
Much love to you!
Cori, Kate and Luke

You really are amazing, knowing just what to say and how to explain it all. I will be thinking about you and that cute belly. Sending hugs and positive thoughts.

I'll be thinking of you all, but especially that precious baby of yours.

Big Hugs from Chicago! We will be thinking about you guys all day!!!

I'll be sending you guys good vibes from Canada!

Thinking of you all, as always. Tomorrow will be so exciting and scary in so many ways - in your family and beyond. I imagine you'll sleep well when this is over. Best wishes. XOXOXO.

my heart is wrapped around your family.

She will be in my thoughts and prayers.

You are a genius, by the way, all of it.

I love the frog trap idea for tonsillectomies - so inventive and it makes more sense to a three year old! I think we'll just use the straight-forward approach when our time comes and hope for the best. Nolan HATES the hospital (10 surgeries to date) so I doubt he'll have KayTar's super cute responses.

I love her three-year old voice. So sweet!