Last Wednesday, as I was in line to leave the parking garage at school, I read an email from our case manager at Transgenomic (the lab with the $17,000 test that might be able to diagnose KayTar). It said that she had spoken to our insurance and they had denied our appeal again, for the THIRD time. But she offered me an interest-free payment plan, you know, in case the interest was what was holding us back...not the $17,000! It was extremely frustrating and although I am not a crier (I hate crying), my eyes welled up with tears and I had to choke back quite a bit of emotion that was threatening to escape through my eyeballs. I vented my frustration to a couple of people, but otherwise kept it to myself. It was depressing and dwelling on it was not going to be helpful for me, so I made a decision to talk to KayTar's mito specialist about an alternate route to diagnosis and to find out if MDCP (Medically Dependent Children's Plan, something we are trying to get K into, but that is another post) might cover it...and then I decided to let it go and choose joy. I wasn't super HAPPY about choosing joy, but at some point, I just had to accept that letting myself wallow would not make me feel better and it would not change the outcome. I would have to wait and see what came next and decide to go for another round of appeal when I had more information. And I prayed.

I don't talk about my faith much here, but it is an integral part of who I am. I pray about things in our life and for people we care about and things going on in their lives, too...but in praying over our life, I rarely ask Him to change circumstances or fix things. I believe that He allows us to be challenged for a reason and if He wanted to intervene, He could and would. He knows my heart better than I do, I'm sure, and He doesn't need me to tell Him what I desperately want or need. I don't pray for KayTar's healing, I pray for wisdom for those caring for her, strength for Josh and I, joy for her, diligence to fight through the battles we face, and so forth. He created her just as she is and I don't pray away the struggles that come with it, I do my best to pray through them. Sometimes when I am too tired to pray for strength, I just simply pray that He would move someone else to pray for me. I know that mountains have a purpose and it isn't my job to tell Him where they belong, even when I am tired. He knows. So on Wednesday, I did not ask Him to fix it...instead, I told Him I was exhausted. I told Him that I was tired of jumping hurdles and just wanted to lay down in the middle of the track. I maybe flopped onto my bed to illustrate my point. I asked for strength and wisdom in moving forward, because dramatically tossing myself down in the middle of the metaphorical track was not a realistic choice, and I thanked Him for the encouraging people He has placed in my life. There was more, but that was the meat and potatoes of it. I felt kind of better. Less wallowy, more ready to find some joy and move forward.

Today, my cell phone rang. It was an out of area number and I answered it because I thought it might be related to Mito Camp (this weekend!). Instead, it was a manager at Transgenomic. She said that unfortunately, there was a lab error resulting in KayTar's test sample being ruined and they would need another sample. We've had this happen before, so it was not a real shocker. I said something like, "Well, we're having such trouble getting insurance to approve it anyway---" and she interrupted me and said, "Yes, I know you've been working with J to get it covered, but whether or not that happens, we will be running KayTar's sample immediately after receiving it and there will be no charge to you either way." And I said, incredulously, "ARE YOU KIDDING ME?!" She was very polite and said, "No ma'am, I've noted it in the chart. There will be no charge for the testing."  Then some very different emotions attempted to escape through my eyeballs again and I tried to suppress the urge to jump around until I was off the phone. It was miraculous! I don't know if the test will give us answers, but today it doesn't really matter. There was a mountain in the way and then it was gone! There are billions of more important things happening in the world today and every day, bigger prayers that beg to be answered, and I can't explain why He chose to move this mountain...for me...today. I just know that He did. Sometimes mountains move, and it is unbelievably breathtaking when it happens.
Posted by Kyla at 8:22 PM 8 comments:

Not enough to be a post on their own, but worth remembering!

On life: "You know, every day is the luckiest day of my life!"

On Canadians: "Do they say they are going to 'Catch some zeds' when it is time to sleep?"

On wishes: One day we were driving around a parking garage, trying to find a spot. It was taking a while. KayTar said, "I wish we could find ONE spot!" and we immediately found one. She quickly added, "And I wish I had a new car!!" Alas, the second wish did not work.

On complaints: At one of her doctor's appointments, the resident was interviewing me about her history and then asked KayTar, "What about you? Do you have any complaints? Anything I can help you with?" She said, "Well, I just wish it would stop raining so much so I could swim more!" The resident laughed and said, "I'm sorry, I just don't have that kind of power!"

On marriage: "I think that by the time you have a mustache, you're already married."

On her crush: One day we were laying in her bed and she was asking me questions about when Josh and I dated. Then she said, "You're not going to believe this...but I'm in love with---Darth Vader!" 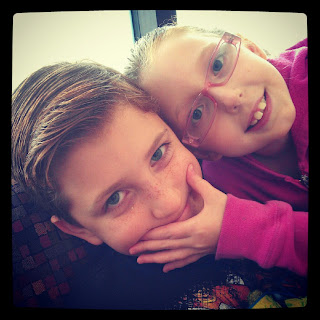 Almost every night, I cuddle with KayTar as she falls asleep. I didn't always do this, but one night I was thinking about what I would miss most if she wasn't here anymore, I realized what I was seriously missing out by not taking advantage of those sweet twilight snuggles while I could get them! Josh has tried to hone in on my territory and cuddle with her a couple of times, but he ALWAYS gets kicked out and she ALWAYS calls me in. He just can't compete with my MSA (Master in Snuggling Arts), I guess.

A week or two ago (I should really keep up with this stuff better here!), he was in a trouble-making mood and when I said, "Okay, I'm going to go cuddle with KayTar..." He said, "Not if I get there first!" and raced me up the stairs. Once we were in there, he said, "Let's let her decide!" and of course she picked me, as always. Like I said, he was in a trouble-making mood, so he laid down next to her regardless just to see what we would do, and she said, "Uhh, Dad? I didn't pick YOU." As he admitted defeat and sweetly tucked her in and went on his way, she said, "We should really get him a t-shirt that says, 'Gracious Loser' on it!"

Oh my gosh, I almost DIED! Where does she get this stuff?! It was funny enough when she said it, but when I tried to tell Josh the story later, I started laughing so hard that I couldn't breathe. Life with KayTar is not always easy, but it IS always, ALWAYS entertaining.

Attack of the Lalaloopsy!

One day while KayTar was doing her homework, she mentioned that BubTar was creeped out by her Lalaloopsy dolls. We decided to give him a little scare and KayTar told me to put her in his bed, on his pillow, face up, body turned backwards. It.was.AWESOME!

The first time was so fun that it turned into a little game and I started leaving it places to surprise him!


One weekend, I let him help me hide her for KayTar, too!


The doll has been on hiatus for a couple of weeks now, because I think we were all getting a little too used to it...but I predict she will show up again soon! :)
Posted by Kyla at 10:07 AM 3 comments: 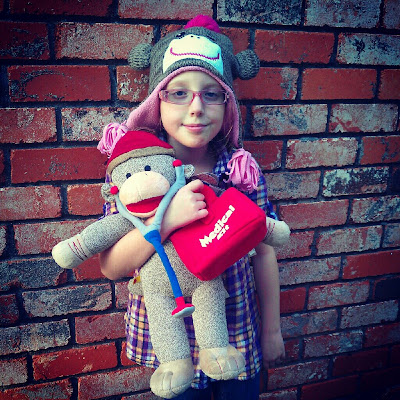 KayTar and Lily, the monkey with medical problems.
The cashier asked her, "Oh, it is a doctor monkey?"
And KayTar said, "No, this monkey's got medical problems!"
Of course.
Posted by Kyla at 4:32 PM 2 comments: 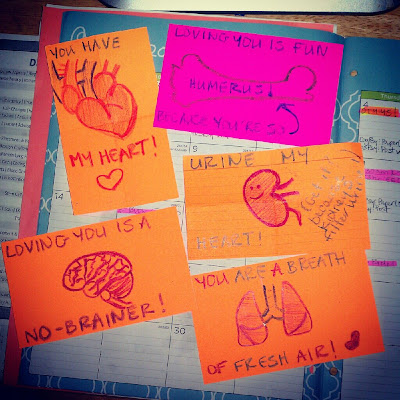 A few weeks back, KayTar asked me to write her a little note to take to school and since then I've been writing little love notes and hiding them in her sweater pocket every day. This week I got a little more creative and went with a theme, ANATOMY! Or "doctor humor" as KayTar referred to it yesterday.
Posted by Kyla at 8:45 AM 4 comments: