Ode to the Bottle

Tonight, I laid next to KayTar as she fell asleep, watching her every move, feeling my heart swell in my chest. She pulled her blankey to her face and settled in, drawing long, slow drinks from her beloved bottle of "chocolate milk" which is neither chocolate nor milk, but vanilla and Pediasure. Her eyes fluttered and she grew still, her breathing slowed and her drinks grew shorter, little grunting breaths interspersed in the sounds of suckling. Her hand started to slip as she grew sleepier, the bottle dipped and she drew in air. I fought the urge to reach over and right it again as I did in her infancy; she's a big girl now bottle or no. She lifted it higher for a few seconds and it dropped again, up and down it went until she grew too sleepy to bother. The nipple slipped from her mouth and she continued to nurse from the phantom bottle for a few more seconds before sighing and groping for my hand. She curled my index finger in to her little fist and released one last contented sigh.

KayTar and I did not have a successful nursing relationship. We tried, both of us, but it wasn't in the cards. I pumped for her for the first month, because she just could never seem to latch on. Now I know why, of course, low oral tone, but then I didn't have any idea. I offered periodically and one glorious day she finally latched on. I remember calling Josh immediately, pleased as punch. We could do this after all! Alas, although we won that battle, we ultimately lost the war. We had limited success with the latching, but every nursing session was an exercise in futility, she struggled and cried...nursing just was not as easy as drinking from a bottle and so about the time she was four months old, I let her wean herself as she had been desperately trying to do all along.

The bottle was no picnic either. BubTar was strictly an Avent infant, so before she was born, we stocked up, sterilized, we had it all. We had done the trial and error and we knew what worked. And then, we offered her one of our shiny new bottles and she couldn't drink from them. The nipple was too big or too firm or too something. She screamed and gave up. We used the ready made formula and nipples they gave us at the hospital, but even those gave her trouble. We bought pack after pack of bottles trying to find a solution. We tried different formulas. We tried it all. Feeding was a struggle from the day she was born. We thought the problem was gas or reflux or maybe an allergy, frankly, we had no idea. We just wanted to fix it. I don't know how or when we discovered it, all those months are such a painful, confusing blur for me, but after finding a few that were deemed only acceptable, we finally found a winner. The cheapest of the cheap, Parent's Choice bottle from Walmart, non-bumpy nipple, slow flow only, single-pinhole.

She said, "Oooh, baby girl is getting big! How old is she now?"

"She is two." I replied, while smiling.

"It's time to get rid of that bottle, Mama." She stated, as she closed the car door.

And I pulled away from the curb feeling very much like I had been slapped across the face. Hot, wet tears poured down my cheeks and I didn't know why. I was angry and shaking, and the tears kept coming.

I was so wounded by her words, I sent her a letter in response. In it, I said this:

KayTar(...) has a feeding disorder, which prevents her from drinking from a cup or straw. She is still on purees, so most of her nutrition comes from her bottle. Without it she would have a feeding tube.

Here we are, THERE, the feeding tube right around the bend and all I feel for that bottle anymore is gratefulness. It nourished my child when my body could not. When her weight had fallen down, down, down the charts it held the Pediasure that allowed her to climb back up the charts. It provided her calories, enticed her with its comfort, ensuring at least one of her feeding experiences positive. It has soothed her through countless doctor's visits and tests. Dammit, the thing is practically a member of the family now. Next week, though, an era will end...the era in which bottles are necessary to life. Finally, after all of this time, we can wean her from the bottle without risking her nutritional stability. Although the transition won't be easy, I'm sure, it is now at least possible. Is it strange that it gives me little heart pangs? My sweet, sweet baby girl and her well loved bottle, going their separate ways. The final vestiges of babyhood finally falling away behind her. 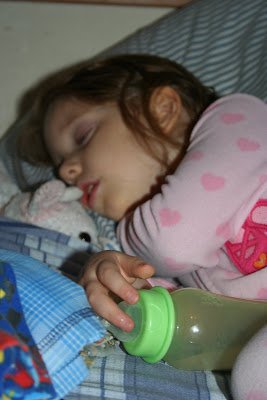 Do you think it would be too much to have it bronzed?
Posted by Kyla at 7:14 AM

Oh I am such a stupid sap. I am sitting here now with tears streaming down my face. For you and your struggles. For Kaytar and her bottle and her upcoming surgery. For every judgmental thought I have ever had about a 2 year old with a bottle.

How about taxidermy or getting a coating of shellac for it :-) You're rounding a very long corner and like everything else you've been through, you'll make the insurmountable seem easy and graceful. xoxo

What a beautiful letter. People can sure be thoughtless sometimes, huh? But you and Kaytar sure have come a long way: just contrast *now* with *the*. Yeah, feeding tube, but she's so much stronger, so much healthier. You should be proud.

I love people that think we, as parents, must know NOTHING. People need to learn to mind their own business. I am sorry that happened. ((hugs))

and p.s. Cameron still takes a sippy cup at night before bed which may as well be called a "bottle," and he doesn't even have any feeding issues. ;)

Kyla, that is heartbreaking and hysterical all at once. By all means, get that thing bronzed.

I remember that letter, and am so glad that you wrote it. Regardless of the fact that she thought she was helping, people should leave parenting to the parents. I'm just sayin'.

Lovely post, K. You two have been through it.

By all means -- get it bronzed.

Bronze away my friend *hugs*

The girls still use Jakie's feeding tube to "feed" their babies if that makes you feel any better.

dude, that was the most beautiful bottle post i can remember reading. definitely bronze the thing. or burn it. or do both, if you have more than one? because symbolically, both actions might be important.

it is hard to turn every corner, to leave behind the scenery that has become a daily part of us, even if we'd intended to leave that scenery behind long ago.

thanks for the finest lesson in not judging, in not causing harm and hurt, that i've had all day.

And you don't need the bottle... you have that letter and these other wonderful written memories of how well it served your wee girl...

Kaytar's relationship with nursing/feeding/the bottle is exactly the same as Willow's was... I could never get her to latch on (except once) so she never breastfed and I pumped for a month or so. Then finding the right bottle was an ordeal because she rejected all the bottles we bought... etc. etc. Then as she grew her bottle became her #1 comfort item. She always had a bottle of milk with her, clutched in her little hand, day or night. She didn't eat any solid food. I remember at her two year old "well" check up I tried to hide the bottle because I didn't want the doctor to tell me off but there was no way I was getting rid of it. Of course, it didn't work, Willow wanted her bottle and I eventually stopped trying to distract her and I let her have it. I cringed as the doctor saw, but you know what she said? "Don't worry about it. She can use it until she's five... if that's what she wants". Amazing what a difference a few kind words makes because after that I did stop worrying and I did stop caring what other people thought... and when she was about 3.5 years we were able to give up the bottle but it was gentle and easy... of course to this day she has a very limited diet (pureed food mainly) but she has been able to get enough nutrients not to need a feeding tube.

I'll be thinking of your sweet little girl as she has her surgery. I hope all goes well.

what a love hate relationship with the bottle. I agree, bronzing a plaque, something...

That was so moving, Kyla. I am teary-eyed.

I'm so glad you are sharing your story, and KayTar's.

i think you just bronzed it with your words

Again, I marvel at your strength, your words, your devotion. Everytime I read you here Kyla, I learn something, be it something I had forgotten, or something I needed to be reminded of. Thank you.

Oh Kyla,
This was so beautiful. I remember that other post and the righteous rage I felt on our behalf. But this loving tribute that you've written down here is the equivalent to a bronzing.

All the best with everything over the next two days. I'll be thinking of you constantly.

Very sweet. Thinking of you and your precious girl.

What a wonderful post. Bronzing might be in order if you want. Or hold on to one or two for awhile and then decide later if a bronzing is in order. :-)

Re: the room mother's comment - some people can be so thoughtless. They need to mind their own biz'ness. I am "still" nursing my 29 month old. Just like a toddler uses a bottle, he nurses for comfort and to help him relax to sleep. As he gets older I feel more reluctant to nurse him in public, but if he were to fall and be inconsolable while we were out, then anyone around had just better deal with my nursing him.

I don't know how you handle all of this with such grace and courage, and still manage to share it with the world.

I never thought I'd feel emotional about a bottle and yet here I am. I think that sweet picture just did me in. :)

I just want to say all the very best for tomorrow.
Excellent reading video, btw.

I am breaking my hiatus to send my best wishes for surgery tomorrow. I will be thinking of you and your sweet little girl.

it sucks that ya'll have to be strong through this. I'll just be grateful that the bottle kept her healthy enough for long enough for her body to be stronger and for her to be able to talk to you about the frogs and the hospitals.