Rarely, if ever, has she gone through an episode that left us feeling lucky. But this time? We do. Completely.

It was painless. It was short. She should have had 3, at least, in the time it took her to have this one minor episode. It was a gift in so many ways.

In between episodes, I'm waiting, watching, always. I don't even realize it at times, but I am. We expect it to be around the next corner. Hidden in the next moment, just out of sight. While on vacation, we were putting her in her swimsuit and she stopped. Her eyes closed. And our hearts stopped.

Her eyes are closed.

KayTar, are you okay? Can you answer me? What's wrong?

Turns out the air from the overhead fan was bothering her eyes. That's all. Normal, innocuous, but we thought, "Here it is." We always think that. We always wait for it.

So now the clocks are reset. She can go to camp today without my heart stopping each time the phone rings. Without me explaining the episodes AGAIN to the nurse, to her teacher. Without my heart begging me to keep her home, safe, where she can be cared for if it happens. When it happens.

As for outgrowing them? I hope. Man, do I ever hope. She's had 31 episodes in her 41 months of life. 6 months, 14 months, and then at about 18 months they really started coming fast and frequent. Every 2 weeks, in fact. They started at roughly 45 minutes, every two weeks. Like clockwork. Terrible, terrible clockwork.

It isn't an exact science, but there are trends. As time has progressed, they have generally grown longer in duration, with a few exceptions. From 45 minutes up to 11 hours last go round. Overall, the time between has bounced back and forth, but the long stretches have become longer. Her larger breaks tend to be followed with a more "normal" spaced break. 69 days, followed by 30 days. 73 days followed by 39 days. 90 days followed by....who knows. We've had some surprises. 4 episodes in a two week period. One episode that seemed to last minutes rather than hours. She's had episodes on two consecutive days. She's had easy ones and hard ones. They started with the predominate symptom being a head tilt, now there is no head tilt. Sometimes there is vomiting. Sometimes pain. Sometimes light sensitivity. Sometimes sensitivity to motion. Always, always a loss of conscious awareness, and a decrease or cessation of responsiveness.

I could discuss these at length, study the similarities, note the differences. It can never be summed up as neatly as I'd like. It is messy and mysterious, it gives us just enough information to feel that we have some control, that we know something of it...but the threat of the unknown is always present, in our minds, in our hearts, in our memories. It lurks just out of sight, the monster that snatches our girl away, takes her to a place of discomfort, illness, pain. A place where we don't have any power at all. We just silently hope that each time it won't be too bad, too long, too hard for her. And so while we wished she hadn't had one at all, she did and we still feel lucky, because at least this time, it was not too bad, too long, or too hard for her. Now our clocks are reset, granting us freedom for a time, giving us space to enjoy our lives without feeling the monster breathing on our necks or hearing its growl just around the next bend in the road. It is still out there, I know, but this time she was lucky. This time she escaped largely unscathed and sometimes, that just has to be enough. 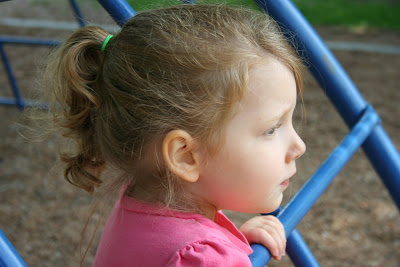 luck being a relative thing, for you, i suppose.

i just wish you were lucky in the absolute sense, too.

It must be so hard, the watching and waiting. Walking on eggshells. Please let this get better with time.

I hope the new trend is even longer breaks and even easier episodes!

The last few posts have raised one of those issues all of us with exceptional children deal with differently: time. You made me realize how often we look at clocks, count minutes, keep calendars all over kingdom come...it is almost ridiculous sometimes. But that is how we survive. Also I celebrate that dear Kaytar had a mild one.

So glad that this latest one was easier...and I, too, wish that the trend was one of "growing out of" rather than "growing up with".

Kiss that KayTar for me.

It just sucks that it happened again, that she has to go through this. I hope that the next one never comes.

oh sweet kaytar. I hope this one is the last.
Fwit - A mom I met at the sotos confernce this weekend told me that she had been told to expect that if her child's seizures went longer stretches between that she could expect this to continue and they might stop entirely.
So that is what I am hoping for kaytar's episodes.

Oh, if only someone had a magic wand that could make it go away or a crystal ball with all the answers... Wishing you all the luck in the world...

ughh, kyla. I am sorry you guys have to always be on point...always be on the lookout for signs. I wish it could be easier. I wish these stupid episodes would just vanish forever. I am glad this last one was minor and I will pray she outgrows these VERY soon!

SHe IS lucky to have you for a mother. You've done so well managing things. Hats off to you. And will keep praying that the good times are longer, the episodes shorter or non-existent!!! This is one for the medical books, for sure!

She's just so precious. I wish they would just disappear: that would be more then enough.

In reading your summary I'm struck by just how similar our two girls are, and the episodes they struggle with. We even had the same cluster of intense episodes in that 18-month old rage you wrote about.

We have yet to have one last only minutes, but maybe that's a trend we'll see. They might both grow out of these--wouldn't that be the biggest gift ever?

oh, it's hard to even imagine. how strong your heart is, Kyla. How strong it has to be.

It can not be easy...having no control, having no answers. I am glad she is better today.

and your vibrant star is back. I wonder how she'll describe the episodes when her language skills develop more - she could b composing great things in that little head o' hers...

Fingers crossed this is the last one ever ... although you'll never stop watching and waiting, I am sure.

Oh, I felt this, the suspended beats of the heart inbetween the moments waiting, hoping. I'm still hoping, thousands of miles away.