Last week, KayTar really wanted us to open her ladybug kite. We've had it for a while, but never taken it out for flying. In this part of the world, there are really only three weeks in the calendar year that are appropriate for kite flying. They generally happen in March, during the split second that resembles a typical spring elsewhere. We missed the window and now the kite stares at KayTar longingly, day after day, and KayTar fully believes that if we opened it in the house, the kite would unfurl its wings and soar around our ceiling. That is what kites do, after all. We tried explaining that it doesn't really work that way, kites have to be flown outdoors with a nice wind blowing, which we didn't have, and that the weather outside was really too warm for humans in any case. After the 500th time we had this conversation, it was clear we were at an impasse and finally had to hide the kite altogether.

She came up to me and said, "I'm finking of something....it's a diamond and it has a ladybug on it and it has a string and a bow and it goes FLY! FLY! FLYING! What is it?" I was instantly impressed, because that is pretty well thought out, knowledgeable speech even for a typical kid, I think...but for KayTar, whose entirely vocabulary consisted of clever little scripts a month or two ago, it was astounding. I almost posted about it here, but then I reconsidered. It was probably just a script I hadn't heard yet, something new she had memorized off of TV.

Then yesterday at nap time, there was a garbage truck making QUITE the ruckus outside. It was idling very loudly, the machinery was making growling sounds, and then they decided to honk the big horn repeatedly. KayTar called me in and said, "Do you hear that? Do you hear that BIIIIG bus?" And I told her, "No, its a garbage truck. It came to take everyone's garbage away." It continued to make noise and she said, "Do you hear that? I'm hearing something that says (idling noises) and (growling noises) and BEEP BEEP BEEP, and it takes the garbage away. What is it?" So I said, "A garbage truck!" And she said, "Yes! That's correct!"

I think that maybe, just maybe, she really is coming up with these little word games all on her own and it seems nearly impossible to me, this huge leap in her understanding and language usage. Skills always come to her in big bursts, so that she is nearly unrecognizable from her former self. I remember it now, I can still see the shadow of the KayTar-that-was right next to the KayTar-that-is...the awkward rote "conversations" we always had with her, the scripts she used to cover the gaps in her language and in her understanding...but in a few weeks, that shadow will dissipate and it will seem like it has always been this new way, that she has always been a kid fully capable of give and take conversations, of witty and intelligent statements, of making us laugh with her spontaneous observations about the world. The only proof of days gone by will be the words recorded in this place, the road map of our journey together, the mile markers stretching back as far as the eye can see, always reminding us that there was a time and place before this one, and that we had to go over mountains and through valleys to get to this solid and even ground. 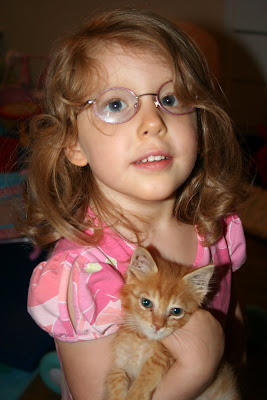 Go KAY TAR! It is wonderful!

She sounds adorable! And I know it is music to your ears.

As well as she has been doing lately, the progress she is going to make by having therapy again is going to be amazing. I can't wait to hear about it...

She never fails to amaze me. It is so exciting that she is communicating so well!

Love, love, love the pic of her and Peanut Butter!

Are you trying to kill us with that pic or what?
It's amazing how far she has come and will continue to grow! And today your children have insurance! I'm toasting you with my lemonade dear one!

How far that little one has come. It is beautiful to watch

I love how she makes you figure it out with her keeping the possibility open. I wonder if she sees it as a game, or if it her way of connecting the dots to making the sentences.

I am not supposed to be reading posts, but I'm so glad I read this one. It was beautiful. And it's so true what you wrote. Suddenly they become this other person and we quickly forget that just a few months ago that person seemed like someone we would never meet. What wonderful news.

It sure sounds good to me! My boys never had any conversations like that... I'd say she's doing awesome!

She continues to amaze me with her progress... I have left you a gift at my site, enjoy.

Sounds like she is progressing in leaps and bounds. Yay Kaytar!

oh sister, what this must mean, after so long, after so much.

after all the battles you've fought. it's this, it's your grace, it's this.

and the cat is ALMOST as cute as the kid! :)

She keeps you guessing, doesn't she? And always full of surprises!

Your words brought tears to my eyes. What wonderful news!

that is fantastic! Cameron is no where even close to being able to describe things like that! WTG KayTar! :)

That's the wonderful thing about the blogging, isn't it? Aside from all the other benefits of community and so on, those tiny moments that could slip by are so nice to grab onto and post now and then.

And I like how she is starting to use descriptives to explain what she is hearing or seeing! That is something lots of kids don't think to put together.

that is fantastic! Cameron is no where even close to being able to describe things like that! WTG KayTar! :)

Amazing.
I am so happy for all of you

Amazing.
I am so happy for all of you