Once, she was unknowable.

This morning when I told KayTar we were heading to the doctor and she was instantly excited to see our pediatrician, babbling on about things she was going to tell her, but when I explained we were seeing her eye doctor her demeanor changed. She said, "But I don't WANT the eye drops. I don't like to lay on you and have drops in my eyes. Makes me feel SAD. No eye doctor. No drops!" Initially, I was struck by her memory. Although it has only been 3 months since her last appointment, I have never been able to accurately gauge how much she remembers because communicating those memories are a very, very new skill for her. Then, as her words washed over me, I realized that not only had she communicated a detailed memory, she had expressed her displeasure, fear, and sadness. I couldn't immediately do anything about it, because I wasn't sure what our exam would entail, but once we arrived I was able to talk to the nurse and reassure her that there would be no drops today. I was able to fix it for her, to banish her fears with just a handful of common words.

I think about the months and months of poking and prodding and testing and sobbing and fighting and fears, the silent painful merry-go-round we spent our days on for so long, and I wonder what it would have been like if she had this skill then...if she could have told us that the adhesive was making her skin burn, or that she liked to be held a certain way when having a blood draw, or that laying down to have her height taken made her feel like she was going to be strapped down and needled again. We muddled through those days somehow, but I wonder how much easier it would have been for her if she hadn't been locked away with her fears, muted with worry and wordlessly pleading for help. I remember her screams, all the screams, and I wonder what she would have said, what she was trying to tell me. It is easy to assume that if a infant or child can't communicate, tears and wailing simply signifies displeasure, and it does...but the possibilities within the realm of displeasure are vast and varied, how are you to guess which possibility it might be? How do you choose the right words to fight a fear you can't understand? I'd stroke her hair and tell her it would be over soon, tell her I was sorry, so sorry that she had to do this again and again, but I don't know if she could understand me or even recognize the emotion in my voice, if those words meant anything once they passed my lips. We muddled through it, she and I, neither of us truly able to understand the other, but I'm so relieved that today we are finally, finally, speaking the same language. 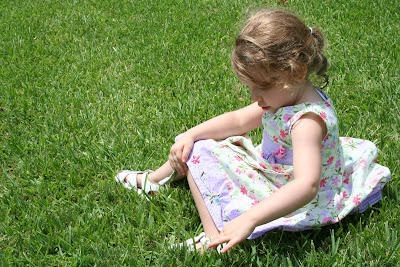 I don't know what to say. You said it, though, you muddled through, did the best you could (and an amazing job at that). This explosion in communication is remarkable.

I am just speechless with happiness for you.

Oh, Kyla. I am just crying ofr you over here because how heart-wrenching, how helpless-feeling for any mother to have to hear her child so distressed and not be able to soothe or fix it.

Thank goodness she's arrived where she has, and i hope it makes it easier. Pumpkinpie has always been quite verbal, and as such, it has been easier to prepare her for appointments with doctors and dentists and needle-wielding nurses. I hoep the same holds true for you and your little girl,

You have got to be one of the most attentive and observant mothers I've ever known (albeit virtually). I'm happy for you for this next step...

oh Kyla.
My heart is just gripped by the image of your baby who could not communicate and the beautiful girl who now can.

She is incredible and amazes me with every achievement...

The picture is beautiful, by the way.

I am here, bawling for you. You with your grace and she with hers.

i wanna give you JUST ONE MORE HUG.

also, oh, my god. you said it. i mean, you said it so beautifully, and also, though my son has had to have very very few of those kinds of experiences, relative to KayTar's, you're so nailing it re: the communication and how it helps. for all parties concerned.

you are the most adorable woman ever.

It is so wonderfully amazing how far she's come in her communication skills. I'm so happy for you, and for her. And I was so moved by this post.

I feel you, my friend. It has gotten to the point that AJ recognizes when we are driving to the medical center. He knows that the specialists have needles... it's amazing to me how much progress Kaytar seems to have made recently. Hopefully this new breakthrough will make things easier on the entire family.

As I read your post, I sat crying. I'm not sure why today, of all days, your words struck a chord in my heart. I know the past three years have been difficult for everyone in the Tar family, but I guess when you compare now to then, the reality of HOW difficult, how emotional, how distressing is so very, very apparent. My heart hurts for all KayTar has been through and rejoices for the drastic changes that have taken place in the past few months.

I don't know what your daughter has been through, as this is the first time I've read your blog, but it's heartbreaking to read of all the needle pricks and tests, etc. Poor little kiddo. No child should have to go through that. I'm happy for you that she's at least able to communicate now and tell you what she's feeling. What a victory for you both!

It's funny, I was just thinking the other day about how much I love the Little Guy, but how very little I actually know about him. Obviously, he's thinking stuff, but what, I know not. It's hard to think that you're doing things that make them unhappy, but you don't know what those things are. With the Boy, we are at the communication stage, and it makes a world of difference. (And just look at Kaytar's pictures in the post above - wow, she's come a long way, huh?)

You know what honey, even back then I believe she heard and understood that you were there for her. it is so hard when they are so small and cannot tell you. But teh way you write about her and the way she smiles into the camera tlls all of us so much about what she feels.