Last night KayTar was sitting at the kitchen table with a pen and a notepad I brought
home from BlogHer. She called me over and said, "Look! I drew Spindella!" (a character from Sunny Patch, if you are unfamiliar) and I was shocked when I looked at it. 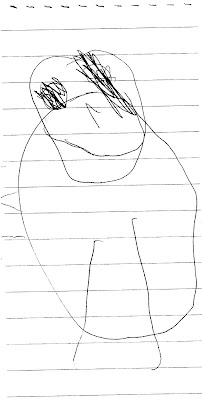 It was so accurate! Right down to the pointy nose. It only has five legs, but I think I excitedly snatched it from her before she got to the legs on the right side.

Then she drew another spider with all 8 legs.

Initially it was just the half circle and wheels, but then she said, "I need to draw some windows."

Lastly, she drew this little submarine.

I was so surprised! Last time she drew me a picture (within the last couple weeks) it was just a roughly crafted face, and now here she is drawing these detailed little sketches that actually look like what she intends them to be. Lately it seems like everything comes to her in these short sudden bursts, one day something seems totally impossible and the next she is mastering it. It is such an amazing process to watch.
Posted by Kyla at 9:30 AM

And she's a great artist! I tell you, kids art should be printed on tee shirts...

I think that's so great. Your last two posts about how far she has come have really been inspirational to me. It feels like with Ben we took 10 steps forward all at once and then lately we took 8 of them back again. Back on babyfood half the time. Back having accidents. It's easy to get discouraged. But if I do what you said in your last post and compare where we were a year ago, it helps keep things in perspective.

I hope I know how much I heart you and your little family Kyla.

she is so awesome

It's like magic. Our moments in casa Bump are coming faster and faster too - good thing we are writing this stuff down because there is no way we'd keep it all straight.

Yes it is and thanks for sharing it with us.

she IS amazing! What precious pictures! :)

She has just been quite the rock star lately, hasn't she? Go Kay~Tar, go! :)

I can't tell you how much I love those pictures!! I teach at an art school--I always love kiddo art.

I thought about KayTar while we were waiting in M's doctor's office yesterday. She was anxious and didn't know what to expect. I kept trying to tell her what would come next and how we would react. (They would call her name, we would go back, the doctor would look at her foot, she would sit in a chair or on my lap, etc.) There was LOTS of role-play going on before each step happened.

Your post about KayTar's reaction to the return visit to the eye doctor helped me explain things to M so she would know what to expect next. Thanks for giving me that insight!

Pumpkinpie's are suddenly getting more representative, too, especially as her fine motor improves. SO cool to watch things gel, isn't it?!

There are artists who spend years to GET BACK to being able to draw like that. I love that stage in their perception and ability.

I love these! Especially that little submarine. Yay KayTar!