We fly out to New York tomorrow and return on Saturday. Originally, we were going to fly out on Thursday, but because of KayTar's habit of having episodes at the airport, thereby canceling our flights, they decided to fly us out a day early just in case. This means that poor Josh has to stay behind, because he couldn't get a second day off of work. Bummer. My mom is coming along to help with KayTar, because I just could not take the kid on a plane without extra hands. After the Arizona trip, I promised myself I would not be flying with her at all for a very long time, but this is a special circumstance.

They are covering our flights, taxis, hotel, and food. They are sending a car to my house to take us to the airport. We are staying at a hotel in Times Square. I'm going to have a stylist. HA! It is quite funny, isn't it? Like suddenly falling into a movie plot or an episode of Ugly Betty, perhaps.

I've spoken with KayTar's pediatrician and her neurologist and everyone recommends preemptively sedating her, loading her with her episode medications before we ever leave the house, hopefully slowing her system so that it isn't overwhelmed and thrown into an episode. The pediatrician also called in a prescription to the compounding pharmacy for a transdermal gel, so if she goes into an episode on the plane, we can give her something without having to go through the suppository thing with an audience.

I feel prepared in every tangible way, flights have been rearranged to accommodate her, we have a plan to prevent and subsequently treat an episode, the sedation should even make her behavior a bit easier to manage...but I am still worried. I will continue to be worried until we touch down in New York tomorrow and then I'll probably worry once again on Saturday before we board the plane. Of course, ideally all the preparation will turn it into a non-issue. Anytime you put this much worry into something, it immediately ceases to happen, just so you look a little foolish. So I'm hoping all the worrying is for naught, because look foolish is certainly better than the alternative...a vomiting, screaming, writhing child with altered consciousness on an airplane, when light, sound, and movement just makes everything so much worse for her.

Today I have to go pick up prescriptions and buy a Max and Ruby DVD and pack and do all manner of preparatory tasks, so I might not be visiting blogs until I'm back this weekend. Like I said, my mom is coming along and she doesn't know about the blog and so I may or may not be able to sneak in updates from New York, but I'm sure there will be lots of photos and stories to share when I get home.

If you have an genius entertainment strategies for kiddos on airplanes, leave them in the comments. Also, answer this question, if you were seated in front of a small, adorable child with developmental delays and she repeatedly kicked and/or pushed on your seat for a 6 hour flight, would it make you feel better if the mother offered to buy you one of those tiny bottles of liquor from the drink cart? 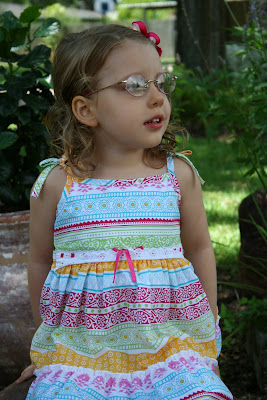 I'm so excited for you. What an amazing thing!

It sounds like you have preparations under control. You manage things so impressively. Details, indeed. But I will make sure to worry along with you. (It's kind of like bringing an umbrella to ensure that it won't rain.)

I hope the flight goes smoothly. I can't wait to hear about the photo shoot and all that stuff.

This is so exciting for you. I hope everything goes smoothly. You've done everything possible to ensure that the flight goes as well as it possibly can.

As for the passenger in front of KayTar they will be fine.

Oh have fun! I can't wait to hear all about it!

I once gave the people in front of me a whole booklet of Southwest drink coupons. I told them I would do my very best not to let my little one annoy them (Jack Jack was 18 months), but if he did, they should feel free to have a few drinks.

I would say, lots of DVDs and make sure that the DVD player will last the whole trip. Pay more for one, if you have to. It will be worth it. And by the way, I LOVE Ruby and Max. I am singing the song now.

As much as someone can prepare something, you sound PREPARED.
ANd yes, drinks. Drinks of their choice.

Good luck with everything! I hope all your preparation is for nothing and that everything goes smashingly well.

Further, if I were that person in front of you, yes the little mini bottle of liquor would help. If you snuck a quick sedative into it, it could only help all the more.

I just so want to smooch her

How exciting. I am hoping all the preemptive measures work and that Kay-Tar is ok. HAVE FUN and fill us in when you get back...

Sounds like you've thought of everything. I hope it is a wonderful trip for all 3 of you.

I think it would be a good idea to explain the situation to whoever is in front of KayTar before the plane ever takes off. I'd think that would make them more understanding if there were some problems. And offering a drink is never a bad idea! :)

All kids kick the seats in front of them. I took my 13 month old on a trip to NZ & let me tell you, the people in front were not too pleased with us. But what can you do.

I know that Kaytar's circumstances are different, but also don't lose sight of the fact that ALL kids are disruptive on planes. That's just how it is. So try not to put too much undue pressure on yourself... They will survive.

(And on a more fun note - any questions about NYC - feel free to contact me.)

Kyla - How fantastic! I suppose my forewarning about talking to the media did not really prepare you for this :) You and the kids are going to do well - I have no doubt about that!
I would suggest you contact the airline immediately to ask for bulkhead seats. Those are the seats with no one in front and there is a bit more room in case KayTar wants to stand or prop her feet up. They reserve these seats for people with disabilities and I think KayTar would qualify. It is possible they may tell you to ask when you check in, but probably not if you mention a possible episode.
Looking forward to hearing about the trip...Teresa (CDF-TX writer)

Kyla!
Congrats and good luck to you! Plane ideas (mostly the obvious sorry):
Small bags stuffed with inexpensive items that the kids have never seen before.
DVDs, CDs, books, snacks (for Bubtar at least),Crayons, Cards.
Do you have a story that you can read to the 2 of them?
When traveling with my 3.y.o., I have been known to resort to Benadryl, so you are not alone on that factor.
I agree with the advice to warn the person in front of Kaytar and yes, Drinks are nice.
It will be fine.
Can't wait to hear the details!!!!

For lil folks, I like the idea of bringing small gifts to open every half hour or so ~ even things from a dollar store. Something new can be very entertaining even for small attention spans.

And yes, I think a bottle of alcohol to the person in front will more than suffice. I'm sure they'll find her adorable without it though :)

I like the idea previous poster recommmended about opening little goodies every half-hour or so.

I'm so impressed they asked you to do this! HOORAY!! Can't wait to hear it all.

O.T. Why doesn't your family know anything about your blog?

You are one prepared mama! And you had better find a way to update us! Good luck!

I second the little, wrapped gifts idea. I haven't flown with kids, but it works to distract on a long car ride.

I can appreciate the excitement of your trip, but I'm wondering why they wouldn't send a photographer to you instead of sending all of you to NYC? Getting photos of you in your natural environment and all that...

one of those tiny bottles from the drink cart would definately make me feel better.

i find that letting MQ pack a small bag herself entertains her FAR BETTER than anything I would choose for the airplane. not that I don't stock up, too. and puppets out of barf bags. make them then play with them. hours of fun for all.

Best of luck... can't wait to hear about it all!

Good luck, sweetie! You sound very prepared and I know it will go fine.

babe you are FAMOUS! you are MONEY!

everyone else just needs to deal. that's it, K, you are on notice girl.

I am absolutely giddy for you. I know you're nervous about the trip (anyone would be), but you'll be great - better than great.

Just be yourself and tell us all about it when you get home! Wishing you the best!

we always liked the leapster on airplanes. does she have one, or does bubtar have one that she can borrow?

I think your idea to approach the situation with humor, however it is with the person in front of KayTar is a good one. Or asking for the bulkhead seat on the plane or something.

But I think this trip is going to be better than your AZ one.

We will SO miss seeing you around while you're out becoming famous!

Hope it all goes well.

Good luck, Kyla. I hope everything goes well. With all this prep work, I also believe that it will be fine. It has to be.

I hope you get a chance to enjoy the experience, and I cannot wait for a full report upon your return.

st caught up here--god, kyla wish you could take a side trip here! but seriously-- i am so happy and thrilled that this is happening.

Oh...have fun! A real live stylist? I can't wait to hear about that...it always seemed so elegant and amazing...

I hope that everything goes swimmingly well, and you just seem silly to worry (I'll keep my fingers crossed for you) Mayhaps you should bring extra tiny bottles of alcohol AND a happy pill or two?

yes. yes it would.

I've got nothing for you. But I'm wishing you the very best luck I can manage.

I'm excited about this, but I can totally understand the worrying - I'd be worried, and I have not a fraction of the things to deal with, and only one kid! But I cross my fingers that you're right and it's all for naught.