This is Peanut Butter. 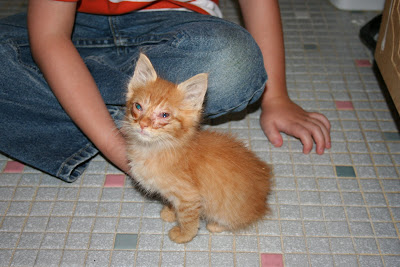 She is our new kitten.

Saturday, after we got home from NYC and the boys got home from their camping adventure, I sent the boys out to pick up dinner that I had promised KayTar. When they got home, Josh said, "There is a tiny kitten under the car." So I went to check on it. It was so small and it looked pretty sickly and I couldn't leave it out in the wilderness of the suburbs, so I told Josh I would just keep it in the garage and go get some kitten food until we could get it to the vet and have it fixed up. Then we would let the vet adopt it out. Josh said fine, but we couldn't keep it. He has allergies. So I've been caring for it since Saturday, slowly falling in love with it and deciding that I couldn't adopt it out at all.

It become one of those things Josh and I both understood was going to happen. He knew I was keeping the cat. I knew I was keeping the cat. I just wasn't going to start the conversation. Tuesday I called vets to find an affordable option and yesterday morning BubTar and I took her in. Surprisingly, she just has the kitty strain of pink-eye! We were so worried it would be costly, but we ended up spending $10.95! She is only 5 weeks old, so she can't have her shots until next week, and then it will be two more weeks until she can have a flea treatment. We've got her moved into the house now, though, quarantined to the upstairs bathroom that has been heavily treated to prevent the spread of fleas. We also washed her in Lemon Joy dish soap and it killed a HUGE number of the little buggers. Since she is still too young for traditional flea treatments, we'll be using the Joy periodically to keep the numbers low.

Yesterday she finally perked up. After 5 days of begging her to like me, she is readily chasing me around and climbing into my lap. BubTar is in heaven. He said, "She is just so cute I can't stand it. I actually CANNOT stand it!" He's been spending lots of time with her since she moved into the house and begged to go to the vet yesterday. He hates errands, but he told me "I'll just be quiet and read my comics, Mom, deal?" So he came along, happily, and even got to help the vet check her out. I think he is the perfect age to bring another pet on board. I have a feeling they will be pretty good pals. He's already wanting to read her stories and can't wait until she is healthy enough to hang out in his room with him.

KayTar is a little too young and unpredictable to have around the kitten much, but she has a great love for cats and I'm sure she'll be pleased as punch to have her around, too. KayTar is actually responsible for the middle name. She was talking about Peanut and then said, "No, name is Peanut BUTTER." So Peanut Butter Tar, it is. 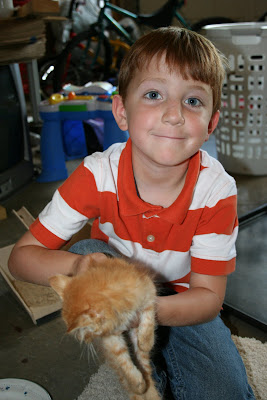 Bubtar is darling in that photo! He looks pretty happy :-)

So cute! What fun that will be for the kids!

I actually gasped when I saw the kitty...I have a soft spot for orange cats.

BubTar is the one who is so cute that I just cannot stand it, though..

for years, i really thought i'd be kinda disappointed by having babies, because they couldn't possibly be as cute as kittens.

we have an orange one too. welcome, Peanut butter, to the blogosphere. :)

I am in love with peanut butter!

I am so jealous that you have a new baby to love - what a sweetie!

That would be VERY hard to pass up...Our, long departed, orange cat, came to us in much the same way. RIP.

Peanut Butter is a perfect name and how cute... You should check out my sister's kitten that we found on Memorial day in the yard. We figured he was about 10 days old at the time. She has been bottle feeding him and he has just turned 1 lb. She has a blog for him dudleydiary.blogspot.com.

She is adorable. Now you need a Jelly to go with her! ;)

Sorry. The kitten is beyond adorable. As a fellow allergy sufferer who loves but can never own kittens, my thoughts are with Josh right now. How will he manage?

What will Josh do?

that is a freakin cute kitty

Now you need to find a Jelly or Jam (Josh will not be pleased with my suggestion). Now that is one cute little kitty - big sigh. Kittens are one of my biggest weaknesses. BubTar is already looking like an awesome master.

so cute! and love the name

What a great name for a cat!

My boys would kill for a cat

How fun must that be, welcoming a lil kitty into your home!

PB is such a cutie. Can't wait to hear more about her!

Peanut butter and a kitten. We have folks allergic to both around these parts. But I can totally appreciate her cuteness...from a distance. ;)

CUTE CUTE CUTE.
My parent's have a new batch of kittens at their place and I am staying far, far away. What I do not need is yet another kitten!

It must be kismit. Our orange cat who adopted us, was hit by a car on Wednesday and didn't make it! We knew he would stay and like you and Josh didn't have the conversation.

So totally awesome for you guys! She is precious!

I am Helen (Amanda's sister) who cares for Dudley. What a beautiful little kitten. I love the photo of Bubtar with him. I particulary liked the part about both you and Josh both knowing you were keeping Peanut Butter but neither saying anything. My poor Dad has had to live that over and over in our family.

Thanks for stopping by to see Dudley, hopefully in a couple of weeks he will be jumping around just like Peanut Butter.

OMG the MOUSTASH!!! I can't get over the cuteness of that dark moustash!

I thought peanut butter may have been named so cause of color. He is really a pretty orange!

And Josh (Mr. Allergic) will get along fine. You may want to invest in a robot vacuum cleaner, cause the best thing you can do with allergies and cats is to VACUUM! You need a HEPA (high-efficiency particulate air) filter, which gets the small things out of the air like allergens. You can get vacuums with them or an air filter for the bedroom.

I also suggest NEVER, EVER, EVER letting peanut butter on ANY bed. It's important with allergic people to sleep in an allergy-free environment, even if they spend their days surrounded by dander. You could get Josh an allergy foundation cover for his pillow, but that is usually used for dust allergies.

allergy sufferer with cat and dog.

A bit of unsolicited advice - excellent option for affordable vet stuff - SNAP - Spay and Neuter Assistance Program. They are off of Durham or Shepherd. All their prices are online. I've gone there for dog and cat shots and my cat was fixed there. Very affordable.

I have a feeling PB is going to be VERY well loved.

Well, that IS an adorable cat... The flea combs can be helpful, too, I add from childhood experience, but my own pair are indoors only, so we've never had fleas. But I'm curious - isn't it a male? Generally, orange ones are, so I'd be interested to know! (But we call our orange make a she, too, so I get that!)

CUTE!!! Bugga has a Shetland Pony named Peanut Butter, about the same color as your new kitten. :-)