I had stopped thinking about it, stopped wondering every day, "Is this the day?" I even felt far enough removed from it that yesterday I discussed how long it had been. I didn't even know how many days exactly, because I had stopped counting. We used to live by the calendar. Every 15 days we knew what would soon be happening. A long break is deceiving, it tricks you into thinking it might all be over. I know all about the medical jinx, but my hope just got away from me.

She's had pretty concentrated eye deviations for the past 5 days, but we don't even know what those are. We're still waiting on the EEG results from a month ago.

Tonight, we went to eat dinner with Josh's family. KayTar was having a blast running around (well, her version of running) with BubTar and Josh's littlest sister. She was being social and silly and fun, all the things she should be. Then she walked into the living room, her eyes darted up and over, like that have done so many times this week, and she slowly fell to her knees. She laid her head on the carpet, bending as though she might be in prayer. She stayed there for a moment and then she stood up and drunkenly staggered to me. Her limbs were uncoordinated and her gait was choppy and much wider than normal. She collapsed into my arms and squeezed me, nuzzling her head into my shoulder. She held on for dear life for another minute or two and then got down. She sat on the floor and played with a toy, but soon slumped over and wanted to be held.

"Hold you?" Her drunken eyes flitted up toward my face and she tried to raise her arms.

I held her and she burrowed in once more. She broke out in a sweat, her whole head suddenly damp, and her eyes started rolling. She was having difficulty opening them and keeping them open. She was incoherent. She started to gag and whimper, she couldn't lift her head. My in-laws packed up dinner for us and we left. KayTar cried and vomited on the way home. She asked for a napkin for her face, poor dear.

We gave her medicine when we got home, and after emptying her stomach, she fell asleep. She is resting here in the dark beside me right now. I just hope she can sleep through. 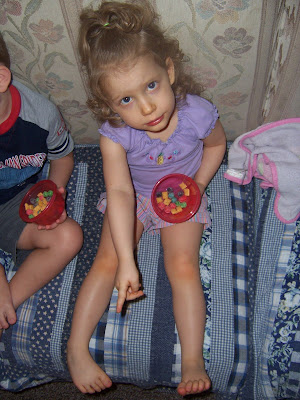 Oh, damn, Kyla. That is so disappointing. I'm sorry. I hope it's over and that she sleeps peacefully through the night.

As you said, they can't all be steps forward. Hoe frustrating and heartbreaking to see your little girl like that.

Oh, Kyla, that must be so scary and disappointing. I am so sorry. I hope she sleeps through too.

How disappointing - especially after eating dry cereal for the first time. Hang in there.

(And love the picture - what a sweet face.)

I am so so sorry. If it's any comfort, I know exactly how you feel--that breath-holding, waiting for it to strike. It happens to Tessa almost exactly the way you describe, except now she has the head pain. It used to be that we would notice her eyes going off-kilter and then she was get wobbly and not be able to walk.

It's hard--sleep seems to be the only remedy. I hope she wakes up back to herself again.

P.S. I was curious--have you noticed a correlation between Kay-tar eating tons before an episode? I ask because of your post yesterday, and we've been charting Tessa's episodes and have noticed that she has an incredible increase in appetite just before getting one.

I should have e-mailed you...didn't mean to hijack comments.

this must hurt so much to watch.

i have a friend whose son was having cyclical vomiting for a while and they were so tense all the timewaiting for the next one.

you're in my thought sand so is that little darling. . .

I am sending healing thoughts to her. That poor kid must be so exhausted by all of this. Sending some for you, too.

Give her an extra hug for me, will ya?

Oh Kyla such good news this morning now this.
What a roller coaster.

Oh, Kyla,it must be so heartbreaking to see her suffer. Sending healing thoughts and virtual hugs your way...

I can't imagine how hard it must be to see her like that and not be able to just fix it all.

If I was there I'd give you such a hug. (And an extra one for Kaytar.)

I'm so sorry. I can't imagine how frightening that must be for you and for her. You're in my prayers.

Hope that KayTar is feeling much better this morning. I hate that she has to endure this. Sending lots of hugs her way!

Hang in there. Thinking of you.

I'm so sorry, K. The only good thing that comes to mind is the length of time that had passed. Maybe this will be the last one or at least wait another 99 days.

Shoot Kyla. That just sucks for all of you. I hope those EEG results come back soon and they can get to the bottom of this. A month, wow, that's a long time to wait. I totally understand the counting days and fear of talking about the good streaks. I'm in that world with E's apnea and know how you feel, my heart goes out to you friend.

Oh poop, Kyla. I'm so sorry. I didn't realize it had been so long since her last episode either. Why couldn't this have happened in the hospital?

It is really interesting how she started eating a ton beforehand...like maybe she was preparing for her brief hibernation where she's vomiting and refusing nourishment for the most part. Hmmmm. Have you notice that before at all?

Anyway, I'm so sorry...I wish she didn't have to go through this. And the pain. Poor baby.

Oh, honey. Even knowing that you've gotten through it time and time again, I can't help but think how scary, how sad, how disheartening it would be to watch it happen to your child. Hugs to all of you, and here's to longer and longer gaps until they really do just go away.

I hope she can sleep thru as well.