Yesterday, we had an ABR that went horribly. In case you don't know, ABR stands for auditory brainstem repsonse, and it is a hearing test for KayTar. You have to sedate, and long story short, after 3 hours and 2 doses of sedative she still wasn't asleep. So we had to leave and reschedule. This ABR was supposed to be done at the end of June, but has been rescheduled twice. Now it is scheduled for November.

We were there from 12-3:30 and the traffic was awful coming home. People were driving like idiots, the roads were packed, and it was raining heavily. By the time I got home, I was drained. I think I fare in these appointments pretty well, but there is something tiring about being fully on-duty, 100% devoted to entertaining a small person nonstop (not stopping for food, even though I hadn't eaten since breakfast, not for pottying because I could not leave her until she was sleeping), that is draining. We went out to dinner as a family, which was the first time I've been out of the house for anything other than a doctor or therapy appointment or hospital stay in three weeks or so. Once the kids were in bed, so was I, although typically I stay up later to feel like I've had a bit of alone time. I was just too tired for alone time.

Around 1am, Josh woke me because KayTar was talking over the monitor. Not fussing, just talking, and I said, "The sedative probably messed with her sleep schedule, if she isn't crying, just let her be." And so we dozed off again. 30 minutes later, I awoke to sobbing, "MamaMamaMamaMaaaaaaaaaaaama..." over the monitor. When I went in to check her, I could feel the heat radiating off her little body. 103.7. I woke Josh and sent him to the pharmacy for acetaminophen suppositories, because we couldn't find our last one anywhere, and I took her up for a bath. After her bath, we gave her medicine and she is watching a Signing Time from her Baby Papasan right next to me. She feels slightly cooler, although I don't want to do her the injustice of a second rectal temperature unless I feel it climbing, especially when she also had to endure a suppository. If your child forcefully vomits out medication, you have to find some way to get it in. This is our way, unfortunately for KayTar. Although, she prefers it to the oral route, her sensitivities and aversions are just too strong to tolerate it much. I sure wouldn't prefer it, though.

I put an email into the pediatrician. Generally, a fever this high makes my mind go straight to the bad place and I bring her straight in, but because BubTar has that [possibly] viral rash, I wanted to run it past her before coming in. And also, I think that 3 appointments in less than a week constitutes as stalking and I'm trying to avoid that. KayTar has no rash, though. Only a high fever with a (un)healthy dose of lethargy on the side. 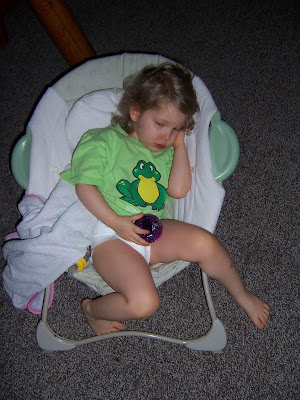 this just sucks, kyla. there is no other way to say it. i wish i could run over with a casserole, some cookies or the kids and a bottle of wine for you. but i can't. instead please except some good wishes and lots of finger crossing.

I don't know how you do it Kyla! You are a strong woman! I hope Kaytar is feeling better soon. Poor thing :(

Damn - you cant catch a break at the moment can you?? Hang in there - I hope it all gets better soon. Though I gotta say Bubtars rash looked like measles to me - I get it every time its going round, at 29, even though I got all my vaccs when I was younger.

it came to me reading this (and probably the last thing you will want to hear) is that you should write a book about all of this. your story would help so many other parents who struggle with ongoing health issues and how to handle it.

Oh no, what a terrible night. I hope KayTar's fever is much lower this morning. I'll be thinking of you guys!

It's just one thing after another, isn't it? You and KayTar (and the whole family) must be just worn out. I wish you lived closer so that I could offer to babysit, and you could have a bit of a break.

Odd question - does your pediatrician know about your blog? It occurred to me that the wealth of documented information her could be helpful to her. I'm sure you share it all in the office, but I know that giving details to a doctor with a toddler in tow can be challenging.

Praying this is nothing serious. How cute she looks in her little chair.

I'm sorry to hear that she's not feeling well, and that you had to reschedule the test again. Hope all is well again soon.

Oh you poor thing! Like everyone else has said, I wish I lived closer because I would definitely come over and help you in some way. At least offer to stay and be the designated driver so you could have a margarita. ;)

Well, on the roseola front, it's sudden, high fever first. Then rash, but only after the fever goes down.

Dammit. I'd love to come and take over with the kids for a bit so you can go out and get a pedicure. Or a beer. Or just sit in the sun, quietly.

Your poor baby. And poor you. I hope that today is better and that everyone is over their awful fevers.

Oh baby. You and her. I just want to wave the magic well wand over her. ((you))

Damn, woman, you are strong.

Feel better. Both of you.

I never do this in comments. Never.

Please let the tooth fairy of parental justice leave a little something under your pillow.

That's it Kyla, no more emails to you! ;) Hope the little troublemaker settles down real quick for you! ((hugs))

When it rains, it pours. I hate that saying but most times find it to be so true.

How rough, how awful. I'm so sorry. Hang in there--I hope all is better.

Now mimi's got me thinking about roseola. With Jack it was three days of insanely high temps. followed by a rash that looked quite a bit like BubTar's. If so, it's viral, and nothing to do for it but wait it out.

This is just too much, Kyla. I'm so sorry.

Oh dear - Kaytar looks pretty miserable...and I bet you feel the same. I was just catching up your story for my wife yesterday. If anyone can relate to the incredible amount of energy it takes to care for KT she truly understands.

We'll be thinking of you all.

Oh, that sucks! Hope for a speedy recovery for everyone!

I am sorry she isn't feeling well and you had to reschedule your ABR test. Hopefully in November it'll be a piece of cake . . . my wish for you.

Remember to take a break if you can, I know it's hard, but whatever works to recharge your batteries -- do it!

In the meantime, blog if it helps. We'll all be here for you.

Awww, hell. Two doses of sedative and no sleep? But disrupted sleep at home as a result? And a high fever to boot?

I really don't know how you do it, either. I think you deserve a mommy-of-the-year award. And a day off to yourself.

That is the most miserable picture of KayTar I have ever seen!

I'm sure it's a bug her brother brought home. I dread this part of the first month or so of school.

And uh Kyla, something a little draining about all that? Hon, I'd be a melted limp dishrag on the bed after that. (HUG)

So sorry the ABR was a bust. What a disappointment.

Get an MD to check that rash...