I was mid-diaper change and ran out of wipes and asked BubTar to fetch the diaper bag for me.

Me: BubTar, what would I do without you?

BubTar: Well, you and dad wouldn't be parents and KayTar wouldn't be here so you wouldn't even need the wipies, Mom.

Me: Wow. That's deep. I just meant you are a good helper. 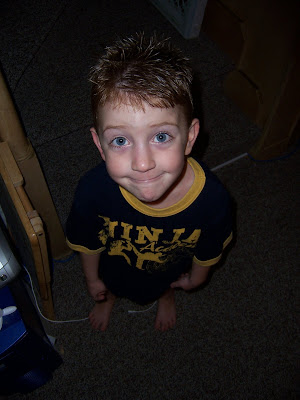 In StrepWatch: September2007 news (I have to put the month in so it isn't confused with StrepWatch: January2007 or StrepWatch: May2007), KayTar woke up without a fever! She has taken in about 8 ounces of clear fluids and a jar of green beans. She had a wet morning diaper and has wet a second since then. She has diarrhea, but isn't vomiting. She felt better for the majority of the morning, but I think she overdid it and it hit her like a ton of bricks. After her bath, she stayed perfectly still, wrapped in her towel and cradled in Josh's arms. It is so uncharacteristic of her, that it really hits home how poorly she is feeling. But still, it was so sweet. 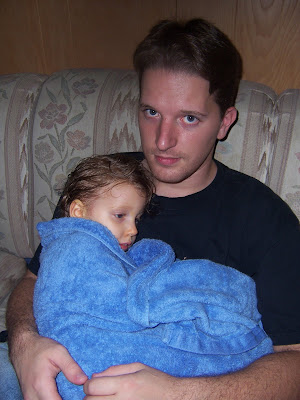 She is napping now, but I just peeked in on her. She hasn't touched her bottle and her diaper is dry as can be...four hours now. It isn't too long, not nearly, we were at the twelve hour mark when we finally conceded to go in last time, but I like to find at least a dampened diaper when I check her. I'm sure once she wakes and drinks, that will change...but it all feels like so much a precarious balancing act with her. Things can turn in a blink. If she wakes up and feels worse, she won't drink and in turn, she won't pee and then the clock will just keep ticking. I know, I know; I'm worrying about nothing and everything. But to me, it feels like preparation and prevention, and that is how I cope. Nothing is critical at the moment, and yet, I know it could be...I feel it looking over my shoulder, waiting; the memory of the last experience casting its shadow over this one. And so I busy myself tracking her intake and output, charting fevers, pushing fluids, making notes, because really that is all I can do. The rest lies with KayTar and I have to trust that this time, her body will step in and take what it needs.

Edited to add: She is did better post-nap. She waited a total of 6 hours to wet a diaper, but since then has wet another. She refused fluids when she first woke, but later decided to take about 4 ounces and two jars of food! She's still having diarrhea, but not to an outrageous extent. So all in all, I think everything will be just fine. I think that she turned that proverbial corner this evening. I hope she did, anyway.

And no one else has shown symptoms! The incubation period is generally 2-5 days, so we have a few more days before knowing for sure if we've escaped, but so far, so good!

[I really hope I'm not jinxing myself here.]
Posted by Kyla at 2:04 PM

I'd never realized before just how much your kids look like Josh. Wow!

Re KayTar: on the upswing, at least the beginning of it. I'll be keeping my fingers crossed.

I hope that by the time you see this comment, KayTar will be feeling much better and drinking lots of fluids.
And HOLY SMOKES, does BubTar EVER look like Josh!

Poor little girl--I hope she is already on the mend, with lots of fluids inside of her and resting easy.

And your poor baby girl. I really hope she starts perking up again soon, drinking peeing, solid poo--but not too solid. *sigh*

I'm thinking about you guys. You and Josh staying healthy after the drink sharing?

It sounds like she's turned the corner. Hang in there.

that was pretty deep, absolutely.

Does Josh totally love having a mini me running around? BubTar pulls the ever lovin heck out of my heartstrings. He is so sweet.

KayTar is so teeny tiny and I don't think I ever realized that before I saw the picture of her and Josh. I am thinking of you and yours tonight, sweet Kyla.

Fingers crossed for no jinxes.

That Bub, what a mind! Oh little KayTar. In my mind and memory, she is a whirl of dynamic energy, so to see her so wiped out and still...AHHHHHH right through the heart. I'm glad she drank and wet a bit. More get well wishes.

Keeping my fingers crossed for you guys! I love that picture of Kaytar on daddy's lap in the towel, really really sweet.

Bubtar is wise beyond his tears! What a smart cookie! I hope things are continuing to look up for Kaytar and that the rest of you all remain healthy.

She's so sweet, snuggled on her daddy's lap.

what a rough time--she looks so sad and little.

and that bubtar is super thoughtful!

fingers crossed that the rest of you will stay strep free.

And bub tar is hilarious!