You know, just to keep with the theme. It is lower, you'll notice. Her small warm body is in my lap as I type this. She would like you to know the same thing I told Julie at her place this morning, "G say guh." Oh, and also? "T say tuh." In case you didn't already know. At least, the fevers aren't disrupting her newly learned phonics.

Yesterday, her fever stayed largely between 102 and 103.5 (at its highest). We got it down to the 101s only once, with a one-two punch of medicine and bath, but it quickly climbed and we couldn't repeat the lowered temp. She was, and is, drinking well enough, so I am pleased. She took in about 24 ounces over the course of yesterday, which is good. I don't think it is the Dreaded Strep, because if her throat was hurting I think she would be refusing fluids. Thankfully she is not.

I went to bed at 11, anticipating the fact that she would wake when her medicine wore off about 1am, but she never woke and I slept right on through until morning. It was quite lovely.

I'm still on the fence about a pediatrician visit. Other than the fever, some lethargy, and a bit of the body aches when the fever spikes ("Hurt. A hurt. Hurthurthurt."), she seems to be faring well. She's drinking and sleeping well enough. She is crankier today. I have a call into the nurse, just to get someone else's opinion. We shall see. 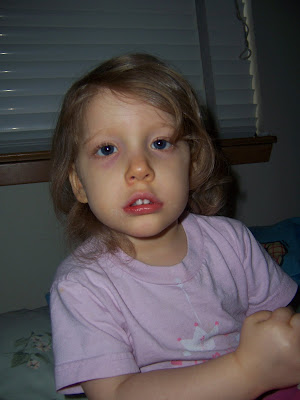 This morning, wearing her "It's fun to be one!" first birthday t-shirt, which still fits one and a half years later.
Posted by Kyla at 10:22 AM

Oy...I hope the fever breaks and she gets well soon. At least this is down to virus fighting level. Burn off the virus, burn it off.

Is she a fan of the Word Factory too?

Sending good thoughts your way.. and hers. :)

Well. It's an improvement. 100 tomorrow, maybe?

Baby steps, right? Here's hoping it gets much better soon.

Hope she just gets better and better over the weekend. Glad you were able to get some precious zzz's!

Oh my goodness, just saw these last 2 posts, you poor dears. I'll send you some nice cool vibes, by cool I mean about 98.6. Hang in there Kaytar!

(thankfully you have Leah and Alex to keep her mind occupied)

oh...she looks tired, sister...a bit tired. poor both of you.

She looks so SICK! Poor little munchkin.
Does she eat popsicles? You can make gatorade popsicles, which are AWFULLY refreshing when you're feverish.

Oh, baby girl. Love to her and you.