Long story short, KayTar will continue to receive services until she switches into the district in February. Everything will remain the same with the addition of HI services. HI services are hearing impaired services with a teacher from the district. I was told it streamlines the transfer when there is already someone from the school involved in KayTar's therapy regimen, and because she qualifies for this, it is the best way to start the transition. Her delays are slightly smaller than they were last year, except for self-help which has actually gotten larger. She still qualifies in the same areas, regardless of the slight shifts.

*Expressive language was the tricky one. The therapist who evaluated her is not her normal ST, but she was extremely thorough and knowledgeable. She was able to identify those areas of KayTar's language development that nag at me. There is a feeling of something being not quite right, but for me it is hard to really pinpoint. I attempted to do so in this post, though. She said that to the outside observer, someone who is not trained as a speech therapist or who does not work with KayTar daily, she will appear to have normal speech abilities at this point. KayTar accomplishes this through an impressive use of echolalia and scripting. She is catching up in number of words and length of sentence, too. But she does not have the following skills:

The fluidity of language does not flow through her; it is cut and pasted from prior instances.

She also has articulation difficulties when using multiple words. It all become one word. Like "What color is it?" it all comes out together in a blur, because she thinks of it as one word. "Whacasit?"

She can't follow multi-step commands or understand concepts that are not concrete, either. A good example of this is her hearing tests. Most children by this age are able to be tested in a sound booth, but because KayTar cannot understand the instructions or respond reliably, it nulls the test.

It is all very intricate and difficult to explain, but the good news was that a new therapist coming into contact with KayTar for the first time was able to see it without my mentioning it. When people interact with KayTar remark that she is caught up speech-wise, I alway cringe internally, because I know that things aren't quite right, although they might appear that way to the casual observer. It makes me feel a wee bit neurotic, to say, "Well, not exactly." Trying to explain it is difficult, especially when I can't articulate exactly what is or is not happening properly. Suffice it to say, the ST said to keep up the speech therapy and that twice a week will be excellent for her. She also highly recommended the HI program as well, since they tackle speech as well. She made a few suggestions for the transition into the district and things to request at her IEP (like an FM system).

She's doing great, though, and making strides. Having all of her ECI therapists here, with the addition of two new ones was great fun. KayTar thought it was party and she had a blast going from one to the next; playing, laughing, and cuddling. They oohed and ahhed over how intelligent she is and bragged about her reading and phonics skills. It was nice to hear them all discussing her with such pride. A year ago, she couldn't stand them for the most part, and now they are great friends. It is heartwarming to watch. All in all, it went really well. 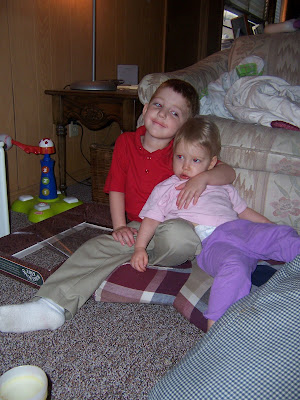 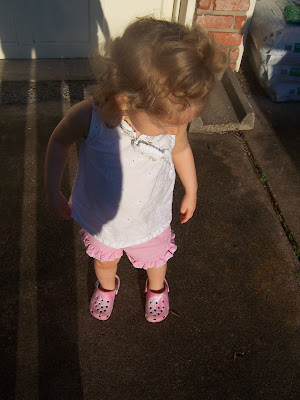 This year. Big girl!
Among her vast and varied accomplishments, she has also grown an impressive head of hair this year.
Posted by Kyla at 3:55 PM

and look at how much she's grown, and accomplishing so much. you are doing it sister. you all are.

and she's charmed an innumerable amount of women on the blogosphere. As have you.

Yes, she's got some lovely hair.

And she's doing great. Those evaluations tell the tale.

Your description of kaytar's speech reminds me SO MUCH of my willow. Willow's speech is now in normal ranges (low end of average) but there is still something a bit odd about it - it is a bit stilted etc. however, with each passing month willow does gain fluidity and spontaneity and her speech sounds more and more normal. i have no doubt that eventually she will sound like a regular kid...

Em: She was saying that kids like this often get lost in the shuffle because they do appear almost normal. The can't find the proper quantitative gaps on an evaluation, but there are qualitative gaps and it will affect them in the classroom without assistance.

She also said that because KayTar can almost appear normal in speech now, others will have unrealistic expectations of her...because she puts on a good show without the understanding to back it up, if that makes sense.

I think she has accomplished the equivalent of climbing Mt. Everest!

It is kinda nice to sometimes not have to explain stuff to people, and feel like a party pooper, eh? I'm glad you have such a good team behind Kaytar.

fabulous! my son did the running words together thing for ages - "takeladfwork" was "take lad out for a walk"and "gernuffcash?" was what we used to say when we were leaving the house "got enough cash?" he probably thought it was something like "is the door locked".

now he talks like an oxford don and uses language that most adults don't use!

What wonderfully thorough results. (Can you tell how jealous I am?) And she's doing so well! I think self-help is a weird one - maybe I'm misunderstanding the category here, but it seems to me that there are certain things where it's just easy for parents to keep doing things for the child, especially when there's so much else to focus on: it takes a conscious effort to focus on stepping back to let the child do it.

Bub has exactly those gaps in his language (though they are closing slowly) - if by "relating experiences" you mean referring to things after they have happened. That was one of the many areas of disconnect in my conversation with Dr. WRE - at one point he asked if Bub could tell us why he refused to walk on snow last winter, and I just kind of goggled at him - we're lucky if he can identify his feelings verbally at all, much less explain the reasons for him. (As always, he seemed to respond to this with polite disbelief, which I think is more of a tic than an indication of his actual opinion.)

Massive hijack here, but yay for Kaytar and yay for her awesome evaluation team, who seem to have done a really good job of figuring her out.

wow--1st a crib party and then a therapist party--kaytar is a wild child!

i feel like i learn so much coming here. t hanks for always making your story so accessible to us.

and that IS a gorgeous head of hair!

Great work BIG GIRL!! (and mom of course).
I get your frustration with people wanting to think she's caught up language wise. Even with my child the story is already too long to explain.
l am trying just to believe that people are insisting everything is ok because that is what they wish for us.

She's a beautiful big girl with gorgeous hair - and look how much she's changed over the past year. Good work.

Great work team Kaytar! I'm surprised none of the experts mentioned how advanced she is on the cute motor scale :-)

Wow! I can't believe how much she's grown up in a year! Sounds like the therapy is really making a difference... and of course, so is her mama.

Hooray for thorough results and wonderful leaps and bounds!

I love how big she looks, crocs and all and beautiful, fluffy hair.

And check out that banner. Splendid.

Whoa, Em's here! It's good to know she's still reading even if she isn't blogging.

It must feel amazing to have a team of professionals cheering for her, and really, truly caring about her progress.

Good on you; all of you.

Congratulations on all the strides you and KayTar have made. Both of you (and your husband and BubTar of course!) should find a way to celebrate the accomplishments!

She rocks. Check out those stats.

I think it's interesting that it's so obvious to me that she learns sentences as expressions or single words, because of the way you write down what she says, but I can understand that it might not be immediately obvious to someone who is hearing her speak.

You are just the perfect mother for her, Kyla, with your keen observation skills.

Oh, that slumpy baby pic is too precious =) Personally, I dread evals and try to avoid them at all cost, so kuddos to you for being so nonchalent about it!

Wow, that's so much progress. Way to go!

It's so great when you have a doctor that just "gets it", doesn't it? It makes everything so much easier and less stressful.

Great leaps and strides for your (now) Big Girl!

She is doing so well! I'm so glad you have the resources available to you to get KayTar all the help she needs. She's obviously in very good hands.

You are right about classroom assistance. The thing is Willow won't get ANY classroom assistance because she is now in normal ranges... but you can't tell me that she is going to struggle enormously. I'm so glad that you are continuing to qualify for support for Kaytar.. long may it last (although I think early intervention is done so much better in the US than in australia). i'm now doing everything privately with willow, which costs a bucket and isn't nearly as intensive. her school has confirmed that she won't qualify for any help when she starts in january.. and i'm very concerned about how she will cope. hmmm... maybe it IS time for me to blog again as i am hijacking your comments!

I looks to me that she is making some progress. I am glad she is comfortable with all the therapists she has to see. It makes a world of difference for the child to be comfortable with doctors and such.