Pain in the butt 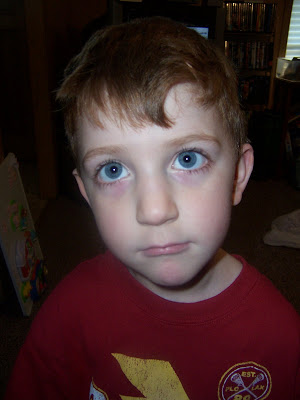 Wednesday night: Wakes in the night complaining of throat pain.

Saturday: Fever is largely gone. Antibiotic shot in the tush.

Saturday night: BubTar's fever returns and he awake howling in the night about his poor tush.

Sunday evening: Fell asleep early. Wakes up a few hours later with a high fever (the thermometer registered around 102, but I think it was closer to 103. He was hot.) He was awake until after midnight feeling crummy with fever and a painful tush. KayTar was up until past midnight that night, too. It was party central here.

Monday: Wakes up with no fever. It bounced back and forth between normal and in the 100's on and off through the day day. His tush still was painful. Limping. Crying. Can't sit on it. Can't lay on it.

Monday night: Fever spikes again. Tush hurts still. Has a hard time sleeping. If he rolls on his tush in his sleep he wakes up screaming.

Tuesday: Wakes with no fever. Still very tired. Still laying around mostly. Still limping. Still not able to sit on his tush.

He is still contagious until his fever has been gone on its own for 24 hours. He has missed 4 days of school so far. I don't think he's milking the buttock injury, because he wakes screaming from it at night and he continues to favor it even when no one is in the room. He lays on his other side with that cheek in the air, or sits at a tilt keeping that side from touching the sofa. He has a red feverish welt at the injection site that is roughly the size of his fist. Last time he definitely wasn't hit this hard by the strep. 24 hours on antibiotics had effectively kicked it. He was bouncing off the walls as per the usual the next day. This time, he's still lounging on the sofa and randomly falling asleep. I haven't heard the words "I'm bored." in almost a week. You know he is feeling poorly when he doesn't complain of boredom even though we haven't left the house in a week. Poor boy.

On a positive note, as of yet nobody else is symptomatic. Of course he is still contagious and we have the time period he is contagious plus 5 days to see if anyone else will come down with it, but so far so good.

On an even better note, today is day 34. That is right. DAY 34. So even if the break doesn't last any longer, it has been wonderful and we have a new record. If the break continues? Wow. That will be extraordinary.

I'm still worried that we will have the unfortunate luck of both the episode and strep hitting at the same time, but we're hoping that won't be the case. So far, so good!

If a bunch of new posts showed up in your Bloglines, ignore them! :) I was adding a label to some older posts. This is the only new one.
Posted by Kyla at 11:30 AM

Day 34. Holy crap! It's hard to focus an anything but that once I see it in front of me like that.

I hope Bub-Tar can resume being a non-literal pain in the butt soon.

Well, I'm glad everyone continues to stay symptom free and I hope Bub's tushie is feeling better soon. Glad the fever is gone.

BubTar is never going to want a tushie shot ever again. I can't believe it is still hurting him so bad. :(

By the way, your banana phone story was super cute. ;)

I really hope Bub-Tar gets well soon and my golly a tush pain can be so unbearable (I had sciatica during pregnancy).

I'm just getting over a bout of strep myself, but luckily, I didn't have to sit around at my conference on one cheek.

But how adorable that he hads to sleep with his butt cheek in the air.

Hope it all gets better soon.

Poor little Bub Tar. Poor family. Geez, this seems, well, out of place how long and difficult this is. Here's hoping the ALLs WELL train arrives at your house soon.

Aw. So sad for BubTar... but fingers crossed on day 34 turning into even higher numbers for KayTar. Improvement, improvement!