Yesterday evening we were driving in the car and had the following conversation:

He said: How many days has it been now?
I said: I'm going to count when we get home, but I think it is day 45 maybe? 47? No, 44? I'm not sure, something like that though.
He said: Hmm, maybe she's just outgrown them.
I said: Don't say that...the JINXING.
He said: I don't believe in jinxing...if it is going to happen, it will happen whether I mention it or not, Kyla.*
I said: You are being cocky...saying things like "Maybe she's outgrown them." I wouldn't do that.
He said: Well, it has been 45 days or so, maybe she HAS outgrown them.
I: *shook my head*

Then we got to my parent's house and the subject was forgotten. Instead, this is what we did. 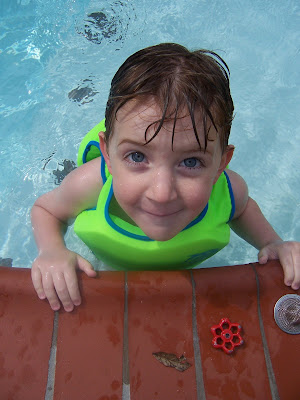 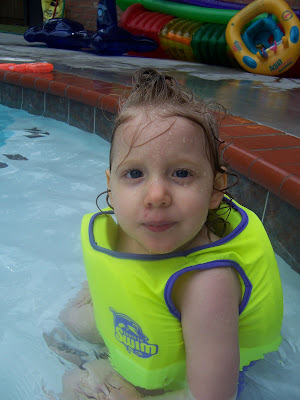 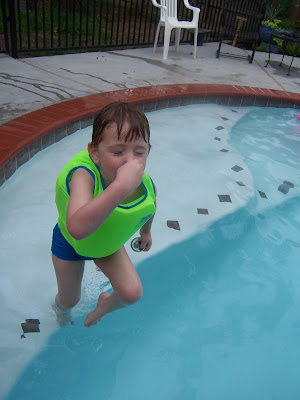 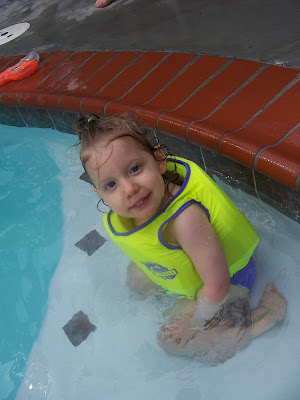 After much swimming and eating and lounging, it was time to go to Josh's brother's birthday dinner, so we loaded up the kids and hit the road. In the car, KayTar was doing the car version of "Foo-foo" in which the windows are rolled down and the wind hits her in the face. She loves this, absolutely loves it. I was turned so that I could watch her, because she gets very upset if I don't participate in "Foo-foo" and I saw her eyes go funny. (very technical right?) So I told Josh to roll up the windows, but the funniness continued. It wasn't the typical jerk/roll to the left, it was all over motion. They were moving up and down, rolling back and forth, moving side to side. Some rolling, some jerking. It was weird, and KayTar was aware of it happening, because she kept pushing her eyelids down over her eyes and rubbing them. Once we got to the party, we waited in the car out front for a moment to watch her to see if it passed. Josh's family arrived and we explained the situation and we decided to attempt going in. The eye thing lasted from 5-7 minutes, and by the time we got in the house, she was falling asleep rapidly. We were in the house long enough for me to hug a few people, and then we had to leave again to get her home and medicated in case the pain was coming. She slept on the way home, and slept once we got home. She only woke because I gave her the medication, which is a suppository...you can't sleep through that! But she just laid in her crib for about an hour, before falling right back to sleep. She cried started crying at about 9:30 and when I went to check her the light was bothering her and she wouldn't let me pick her up, and I thought "Oh no, here we go." but Josh gave her a drink and she quieted down and went back to sleep. She is still asleep right now.

All in all, strange episode...but easy and painless for her. The timeline is something like this:

I don't know if we should classify it as an episode, because it was so different. None of the major players were present. No pain, vomiting, light sensitivity, or head tilt. It really only lasted between 5-7 minutes. It looked more like a seizure than an episode, but who knows. It was definitely something and I don't know what else to classify it as. Episode really is a broad term, so that is what it will be called for lack of a better description.

Of course, once the episode started I immediately recalled the earlier conversation we had. The Jinxing! It lives!


Edited: I went back and changed the (period) in the title to a (question mark), it seemed more fitting.
Posted by Kyla at 11:17 PM

I kind of believe in jinxing, too, so i get where you are coming from. Hope she does ok over the next few days.

Still, though. 46 days is amazing, and whatever it was, it was mild. KayTar is doing so well.

46 days is great. Even if it was a mild episode, wouldn't the increased time between them be a really good sign? It sounds like the time when The Boy had a mild seizure, by the way.

Yes, 46 days is AMAZING. Typically, she would have had 3 by now. 46 days is a wonderful gift. And it was so mild, compared to "normal" episodes...although I'm not keen on the possibility of seizures.

Dang it, Josh! :) My hubby can't keep his big mouth shut about those kinds of things either. A bad sleep night from my boys (while not the same as KayTar stuff, of course) can usually be blamed on hubby JINXING it all.

I feel like maybe you shouldn't. Poor thing was aware of her eyes doing that. That would break my heart to see. She is always such a trooper.

LOL at not being able to sleep through a suppository. Ha ha ha!

He 46 days is awesome!! For the last week, every time I see a post from you on bloglines I think, ok she must have had one now. And whatever this was, it sounds pretty good.

I'm sorry you guys had to miss the party and that KayTar wasn't 100%, but that sure beats ALL of her previous episodes (if this even qualifies as one!). These 46 days have been wonderful for all of you. I pray those bad episodes from the past might be gone for good. Wouldn't that be the best?!?!

46 days, though, is good news I have to believe.

And it doesn't sound like a full, bad episode. Did you talk to the doctor?

46 days! It must be scary for it to diverge from the pattern, even if this one seemed easy and painless. But hopefully they'll continue to get further and further apart. And all this without the preventative meds, right?

That is amazing ... I do hope that she is growing out of them ... what does the doctor think about her latest incident (I'm not going to call it an episode!)

Kyla thank you so much for you words of support on my last couple of posts. I am so grateful for your support and understanding.

I know how scary seizures can be, especially when you don't know exactly what your child is experiencing. Wind used to trigger seizures in my daughter. But luckily this didn't seem too bad. I hope the 46 days gets doubled or tripled now!

she is doing so well...so many days, and of course, on the day you make note of it, something.

but something milder. this is very good.

I am a firm believer in jinxing. That said, I agree that 46 is amazing and it does sound mild (especially in comparison of past). I know I've said this but I'll say it a million times, KayTar is lucky to have parents who are so observant, involved and caring. I think many symptoms would go unnoticed because they are so subtle or easy to dismiss.

BTW - that swim gear is fantastic! Were those life saving vests easy to find? I'd love to get one for Bumper this summer.

As I read this post I feared the jinx. I was so relieved to discover the episode (?) was so mild.