Continuation of a Question Mark

Before all of the drama of this week, KayTar had had an "episode". The more we have discussed it and anazlyzed it, we have decided that it probably was NOT an episode. Unfortunately, we do think it was a seizure. We do not think it was an episode, because it did not include any episodic behaviors; no head tilt, vomiting, dizziness, pain, or light sensitivity. The only common factor between both events is that her behavior clearly showed something neurological was happening. There is a change in mental awareness and behavior when there is a neurological event in progress. The reason we are leaning more toward seizure is that she exhibited typical seizure behavior. And with KayTar, nothing has ever been typical. We've worried about seizures before, as a part of an episode...or at the beginning we thought the episodes might be a form of seizure, but they were NEVER typical. This one was. She had involuntary motor movement (jerking, rolling of the eyes), then she fell asleep suddenly and basically slept until morning. Episodes last for hours. This was only minutes.

I spoke with the pediatrician, and I said, "If I didn't know seizures were off the table, then that would have been my first thought..." and she said that seizures are not off the table. For some reason, I thought that this EEG had taken seizures off the table. Alas, it did not. An EEG is only a snapshot of her brain at a specific moment. The pediatrician said that is she was having some continuous focal seizure activity in the brain, it would be picked up...but random seizures would not be unless she was actively having one while the EEG was being recorded. The neurologist did tell us that at some point, whatever migraine syndrome they believe her to have could trasition to true seizures.

Where does that leave us? It leaves us where was always are, waiting and wondering. Are we glad there is a chance the episodes are becoming a thing of the past? Yes. Do we feel that seizures are a trade up? No. Episodes did not damage the brain, although they are horrid and incredibly painful. Seizures, while mild in comparison, do have the potential to damage her brain. Do we know for sure this is was a seizure? No. Do we feel like it is a strong possibility? Yes.

Are you ready to hear the amazing plan of action?

Here it is: Wait for something else to happen.

Even if it was a seizure, if they only happen once in a blue moon (or every 46 days), then preventative medication would not be worth it. If we do see a repeat performance in the near future and this becomes a trend, then we will have to discuss medication options. If we discover a trigger, like the fact that the windows were down, the wind was blowing, and the sun was behind the trees flickering in and out, then we should avoid it.

Yesterday, we had something else happen. KayTar was sitting with her daddy on the couch, and she tried to sign "Daddy", but she poked herself in the eye instead. She didn't do it very hard, in fact I can show you how hard it was.

Take your hand (whichever you would like) hold it in front of your face, thumb pointing towards your face, fingers fanned out, and tap it on your forehead. There! You signed "dad". Good for you!

Well, that is what she did, only she missed her forehead and caught her eye. She fussed a bit, and kept her eyes closed for a few seconds. When she reopened them, the eye she had poked was pointing inward to her nose and drifting. Her other eye was properly aligned. She blinked a few times, but it continued to point inward and move slightly. It lasted 1-2 minutes, and then she started gagging and almost vomited. We ran her to the bathroom, and then suddenly everything went back to normal. It was very strange, but strange doesn't necessarily mean anything...it is KayTar we are talking about. 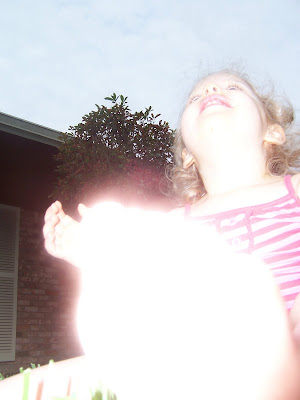 I very well know your worry about seizures. Ben has them. They usually occur when he is "over tired" or has had a great deal of stimulated. I would not be too concerned about KayTar's seizures at this point since they appear to be very short in comparison to some children that we know (lasting hours). From our understanding those very short seizes (under 5 minutes) would not cause damage.

Wow. What strikes me here is the anxiety that must come from never knowing quite what is going to happen (or not happen, as the case may be).

Poking one's eye and having it do that in response?

That would scare the bejeezus out of me.

But you have had so many instances of strange responses that you have learned to be calm, or at least write as if you feel calm!

Kudos to you, mom. I don't know that I would do near as well in your place.

Kyla, It just sounds hard. I can't imagine how much you must worry and worry some more.

Sounds like more and more questions. Things are tough, but sounds like you are really keeping on top of watching and even learning from Kaytar. Take care.
c--

It's so hard to wait and see, isn't it? Keep talking to us about it, as needed.

And that photograph. Wow. It so KayTar to me: her light is so incredibly bright.

What an interesting photo that was.

Um...I don't even know what to say. Why can't anything be clear cut for sweet KayTar? If it was a seizure it sounds mild and so if she's going to have a seizure disorder lets hope it stays mild like that.

Do you think she might have been just starting an event/seizure/episode BEFORE she poked herself in the eye (causing the bad "aim")? And so maybe it wasn't a freaky response to the poke...just something that would've happened anyway? I dunno, of course.

When will that last CT scan have anything to tell you?

My nephew learned sign long before her could speak b/c his maternal grandparents were deaf. The first time I baby sat him I knew no sign language whatsoever. He was in a state and kept hitting himself on the head. It turns out that it was just his way of crying for his daddy. Did I feel like a schmuck after the fact for not clue-ing in.

Kyla, you express your thoughts and experiences so beautifully.

I'm been following you on bloglines this week. It's so great that you wrote that letter and put it all out there. Good for you.

Oh boy. I wish you answers, I really do. I'm with you in the horribleness of "not knowing" and the never-ending questioning and waiting. I wish things were different.

I truly feel for you. My closest friend has two [adopted] children. The 'typical' girl had her first seizure on a camping trip in the middle of nowhere. Her autistic son started having seizures at 7.
The 'waiting game' and anti seizure meds have been torture for her whole family.
Glad the signing is making strides.
Best wishes

I wish I had an answer for you, I really wish I had something magical but I don't. The "wait for something else to happen" approach sounds so frustrating. I'm sending you all the strength I can muster (not that you need it, you ARE one strong woman). Bumper sends (blows actually) kisses.

Hurry up and wait. Argh. Frustrating and not helpful.

That picture of Kaytar is eery and beautiful. I love it.

that picture of her in the light is incredible.

and again, always, i am struck by how well you live in the not knowing. a lesson to all of us, the grace in how you flow.