If your son spits in his palm and tries to give you a handshake, turn to page 49.

Last night around 1:30am, BubTar woke up howling about pain in his injection site. He was feverish again, after being fever free all day yesterday. After both of us tossing and turning while I tried to snuggle him back to sleep, he continued to whimper. I made him take a dose of Motrin. We both went back to sleep about 4am. We've been having to give Motrin today to keep the pain and fever away. Yesterday he didn't need any medication at all and was feeling so much better.

We've been trying so hard to keep the kids apart, but it is a losing battle. We were shooting to keep them apart at least for 24 hours after the antibiotic shot, but somehow first thing this morning KayTar got close enough to plant a kiss right on BubTar's mouth. I turned just in time to see it. I think the germs have brainwashed him into being their soldier. His purpose now seems to be furthering the plague. Every time I Lysol, he is following behind me touching the area I just disinfected. He's sticking his hands in his mouth and touching toys. He's blowing raspberries. I was resting on the couch and BubTar tapped me on the shoulder and said, "I thought you were going to shake my hand?" and held out his little palm, which was glistening with the saliva he had freshly put there. After a few days of doing well with containing most of the fall out, I think it all unraveled today. I'm starting to feel run down and I've had a headache kicking my arse all day...and I think I've been running a bit of fever. Blech. But no sore throat, so I am maintaining that I am well until that starts. And it WON'T. If it were to happen, the system has failed. I've been the go between all week and if I'm sick, I've probably shared it with everyone. Initially we thought it would be okay to lift the quarantine today (even though KayTar crossed the barrier prematurely), since his shot was over 24 hours ago...but since he is still running fever (as we speak) I'm sure he is still contagious at least for 24 more hours. Arg! It is out of our hands. 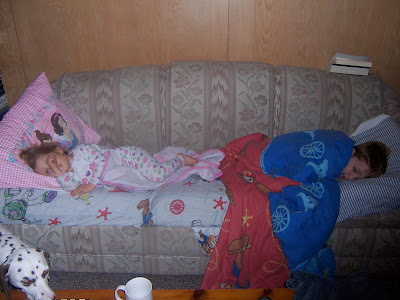 And KayTar did a face plant on this table this afternoon. (It isn't in its normal spot if you were wondering why we have a table in front of a table. *lol*) 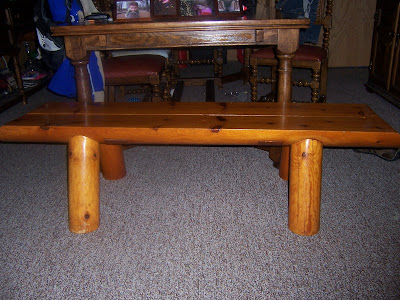 The picture doesn't do it justice, it is above her right eye. 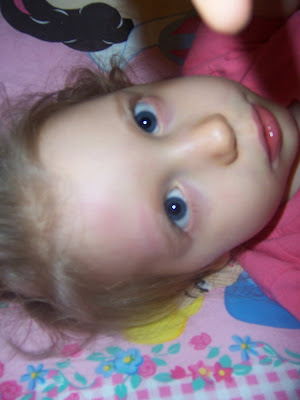 Then she bumped her head on the staircase, right around the same area.

I hear that is great for warding off headaches. *sigh*

Edited to add: Poor BubTar fell asleep on the sofa at 7pm. I moved him to our bed a few minutes ago and he was just screaming from the pain. I couldn't even take his temp under his arm because of the pain. I think he fever is close to 102 again, though. I feel so bad for the little guy, even if he is the type to spit in his hand and try and make me shake it. I hope the medicine helps him soon.
Posted by Kyla at 6:44 PM

Could BubTar be having a reaction to the meds?

Praying that the germ general dies a swift and painful (but painfree for BubTar) death and his germ-rangers will quickly follow their leader.

But look how cute they are together on the couch! Her poor little head - ouch.
My kids often act sort of giddy while they're sick. It's strange!

Keep soldiering on, oh battle weary one. You shall reign victorious over these nasty germs.

What a horrible day for BubTar. I think you've done all you can do to try and keep KayTar free and clear from this. Looks like the cuddle time on the couch is good for both of them. Let's hope she stays symptom free.

I am soooooo sorry for the illness!!!! I hope your babies are well SOON. Thinking about you all!

i hope the medicine helps soon, too. you have your hands so full, sister.

but that picture of them together...ah.

Oh no! You're working so hard. I hope it pays off for the rest of you and your headache is just from all the tiring work you're doing trying to prevent the plague in the first place. I love the picture of them on the couch. Soooo cute.

I'm perplexed why Bub is still sick/sick again. Shouldn't the antibiotics have kicked in for the poor dude?

Oh man...sorry you still have the sickies. I'm just now catching up from last week and had hoped to find all of you recovered!

Many immune boosting wishes to you.

Hey for those bad bumps, if the skin isn't broken may I highly suggest arnica cream? Does wonders for swelling, bruising and pain.