I had a perfectly lovely day. I was surprised with floor seat tickets to a concert from my husband, a lovely color page from my dear boy, and cut out cartoon figures he decorated for me. We spent the morning lounging around and eating cinnamon rolls Josh made for me. We spent the early afternoon at my mother's house, swimming and eating burgers my dad grilled for us. We came home and we all took a nice long nap before visiting my mother-in-law in the evening. We came home and Josh cooked a lovely dinner of asparagus and cheese stuffed chicken breast with garlic roasted potatoes.

We were sitting down and eating the wonderful meal and KayTar and BubTar were playing in their respective rooms, because they had both eaten earlier. Usually they play in the same room, but BubTar wanted to go to his own room for a while, and KayTar was still playing happily in her own room. I was about halfway done with my chicken when I heard THE SCREAM. You know the scream? The one that stops your heart? THAT SCREAM. And I dropped my plate and went running. KayTar was just kneeling on the floor in front of her desk, and it looked as though she had a bloody snot trail coming from her nostril (which was actually the tear). I snatched her up as Josh ran in the room, seconds behind me. And then the bleeding started. Oh man, did it start. It was pouring from her face, she was choking and gagging and sputtering. She was screaming and trying to touch her nose. She couldn't stay still. She was thrashing and howling. She threw up quite a bit of blood at one point. Josh took her to the bathroom to try and get a better look. He could only clear it of blood for seconds at a time, but he said, "We're going to have to do something about it. Its open." Josh is never the first to suggest a visit to the ER, so when he said that I freaked out a little. I called my parents to come sit with BubTar and I paged the pediatrician. I knew she wasn't on call and probably wouldn't answer on Mother's Day, but I paged in hopes she could get us seen in the ER quicker. If your pediatrician calls them ahead of your arrival, you get bumped to the head of the queue. She didn't call back by the time my parents arrived, so we left hoping the ER would be calm. Halfway down the freeway we take to the hospital (and all of KayTar's other doctors), KayTar started signing "Doctor." I guess we drive that road often enough for her to recognize it even in ther dark. Then she launched into the dramatics of "Doctor. I cry. Sad. Doctor." in true form.

In the short time we waited, I must have said "Oh God." upwards of twenty times. Finally Josh looked at me and said, "What? We are at the hospital, why are you worried?" and I said "Can you imagine if they do stitches? How will we ever keep her still for that? They'll have to knock her out." Thankfully we didn't have to find out. I can't imagine how they could have done that.

I'm still not sure what happened. She either fell and hit her nose on her desk, or she fell and hit the hardwood floor. I can't imagine how she split her nose like that. She's gotten quite a few bumps and bruises lately. I'm not sure if it is just because she is walking more of the time these days or if it is tied to her balance and those weird drop attacks she seems to have at times. She really is steady and careful on her feet, so the only way I can imagine her falling with enough force to bust her nose like that would be if she was hit with a wave of dizziness that laid her flat out.

On the way home from the hospital I said, "Hey Josh, we escaped the strep this time, but we still ended up in the ER with KayTar." Lucky us. ;)

I thought the dog had taken care of the doctor quota this week, but evidently KayTar felt that she had to defend her title of Queen of Emergencies.

Here are photos from this morning. 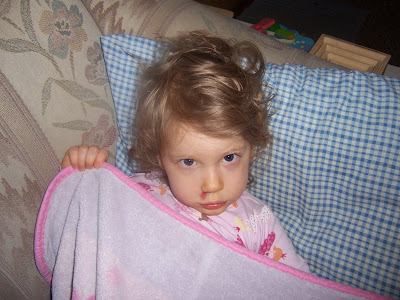 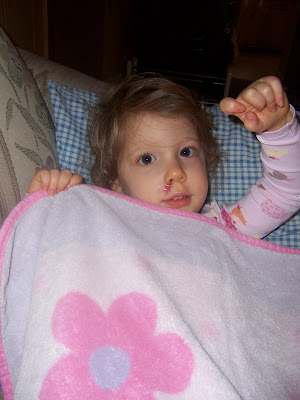 Poor KayTar...your poor Mother's Day. Although it sounded great (and yummy!) right up until that point.

Never any lack of excitement over here.

I wish you many emergency room free days ahead.

Sorry about the ER but glad it's all okay now.

I think you definitely get a prize or something for having to go to the ER on Mother's Day. It sounded like such a pleasant day up until then.

Glad to hear that KayTar is ok!

This was one of those stories that just made my stomach drop. I just hate hearing about KayTar being in pain like that...bless her heart!

The joys of motherhood, huh. Your day sounded absolutely wonderful until that point...especially that dinner Josh made. YUM!

Just...darn. I'm glad KayTar is okay. You guys have officially taken over as Kings of Excitement. I hope that changes (and we don't end up with the title again).

Oh NO. You certainly "earned" Mother's Day. How sad and scary!

I'm with julie. You and the ER are like this, y'know?

I'm glad she's OK. And who took the pictures yesterday? Who was so calm that he could take pictures? Wait. Let me guess. Could it have been...your husband?

My hubs is a rock around blood.

SM: I took the photos, actually...but not until we were home and she was all patched up an happy again. The before pictures would have been much, much worse. *lol*

I wonder it the ER doctors and nurses have a pool wherein they wager on when they will see you next?

Oh, I'm so glad that KayTar is okay. Those pictures are very worrying.

I'm sorry that you had yet another trip to the ER (and on Mother's Day at that!). That family of yours certainly keeps you on your toes.

oh honey. wow. every time i come here and read about the medical issues you face with such bravery and grace, my heart clenches around itself just a little bit.

You guys just never get a break, do you?

A trip to the emergency room. Shouldn't that be what Father's Day is all about? ;-)

Poor KayTar. I'm glad they got the bleeding stopped quickly, though!

Can I just say that you are amazing. Because I would have fainted (I think). I'm glad the ER gods cleared the path for your arrival and that it went as smoothly as possible. I'm so sorry you all had to go through that on Mother's Day (or any day) but I'm glad the little lady did so well. And she is still so cute even with the boo boo :)

Oh my gosh, Kyla! I am so sorry you had to go through that. It sounds so scary, but I'm glad she didn't need stiches at least. I hope it heals up quickly.

Happy belated Mother's Day. I think you deserve a medal this year!

I can't believe you got in and out of the ER so fast.

I hope she is feeling good :)

Oh I'm glad she's okay poor little mite... what a traumatic mother's day for you all!

Thanks so much for stopping by my photo blog and saying hi!