You know you're a techie family when...

On trying to explain KayTar.

BubTar: So she can't hear me? I should TALK LOUDER?!

Me: No, that isn't what I mean. Let's see...hmmm...okay. You are like a Blu Ray disc and KayTar is like a HD DVD player.

BubTar: Yes! I wanted to be the Blu Ray disc!

BubTar: Oh! Okay! I get it. Hey Mom, did you know HD DVDs and Blu Ray discs are SIX TIMES SHARPER than traditional DVDs?

Me: Mmmhmmm. By now, I think you've taught that to everyone we know. 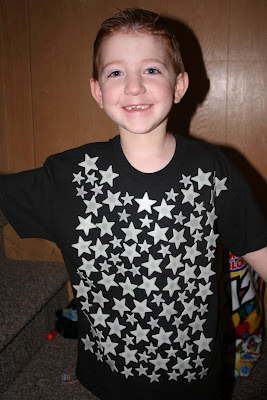 Aw he's as cute as he is smart!

I don't know what in the world you people are talking about, but I'm glad it worked!

Bub sure is dashing in his stars!

Dontcha love how they change the subject soo quickly? Heee!

It's 100 Days Of School ALREADY? Good grief, that went fast.

That's awesome! What a clever analogy.

And your analogy is going straight to SB because he will really get a kick of this post.

It is unreal how similar our children are. Ben is exactly like Kaytar. We know he comprehends a great deal but there are those "other issues" that freak us out even after 8 years.

Bubtar's understanding of his sister will become better as he matures. But trying to explain in terms he understands even at this point is still a great thing to do. That way there will be fewer moments when he becomes upset at how his sister responds (or doesn't) to him.

Get it? Star? 'Cause of the shirt?

The boy knows me for sure in that department--and I love the shirt!

I hate 100's Day, but I'm going to steal your idea when Natalie is in Kindergarten! How'd you stick 'em?

We hot glued them. The shirt won't be usable anymore, but we can pop the stars off and stick them to the ceiling still!

I guess you could also switch the language to french and turn the sound down and use captions to continue the theme :)

Hahahahah. I think it must be a lot of fun at your house.

Wow. And here I would have gone with two languages, not machine languages. Silly old luddite that I am!

I so totally love that kid.

Well, I hate to admit it, but now I'm confused.
must be like Tivo.
how I wish we had Tivo.

Love the little techie!!!! It's amazing what kids can understand if it's in their "Language".

And hurray for the star!!

He's too cute, especially in that photo.

What is this 100 days thing? They are on it like white on rice at P's school too. Huh?

What a day we had convincing her that Mardi Gras parade and parties today HAD NO RELATION TO THIS WHACKADOO 100 DAYS THING!

Oh geez, Kyla -- I've been trying to explain BluRay v. HD-DVD to some colleagues, so perhaps they might understand better if I frame as, "think of it like Kyla's kids"