One more birthday post and then, I'm done. Promise.

Last night was her big party, the one with extended family and cousins, and we had it at Chuck E. Cheese. It was a MAD HOUSE. Wow. We've done these parties many times before, it is always where BubTar wants his party, but last night was just not smooth sailing at all. KayTar had a blast though. She had grandparents at her beck and call, cousins to scream with, and ice cream and pizza to eat. From her point of view, it was a success. From mine? Well, let's just say my friends and I went out for drinks afterwards in lieu of coffee. And we ended up getting passes for free pizza, drinks, and tokens from the manager because of how poorly it was organized (on their end).

And then, as we were leaving, I kissed KayTar on the cheek and realized HER HEARING AID WAS GONE! Bye bye $2000! I freaked out. Josh was in front of me, leaving the building, and I called him but he didn't hear me. I went to find my mom and dad to ask them if they might have taken it off and put it in their pocket, they said no. I asked my sister the same thing. Nope. Then I really panicked. I talked to the manager and she notified their workers to look for it. My mom and dad retraced their steps. The kids crawled under tables to look for it. I went to tell Josh to wait for us. He was waiting in the front and I exclaimed with much feeling, I'm sure, "Oh my God, her hearing aid is GONE!" And he said, ever so calmly, "Nah, it is right here in my pocket." And then we called off the search party, but only after having what felt like several small heart attacks in a row. We also have a newly created Ifyoutakethehearingaidoffinpublicnotifytheotherparentimmediately rule to prevent future heart attacks. 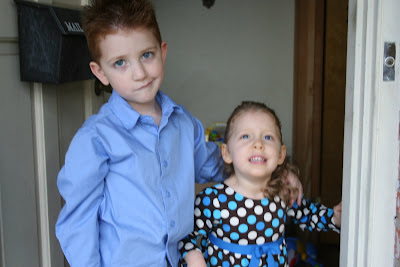 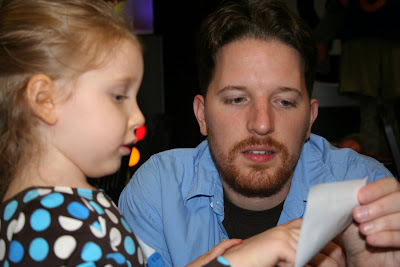 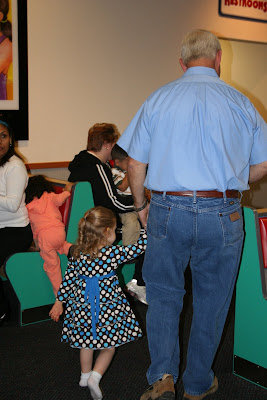 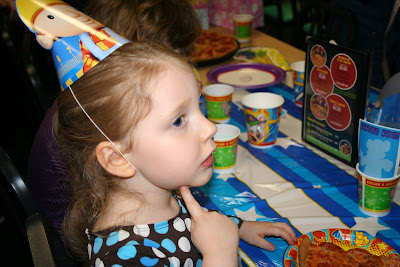 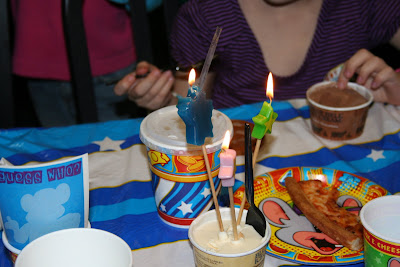 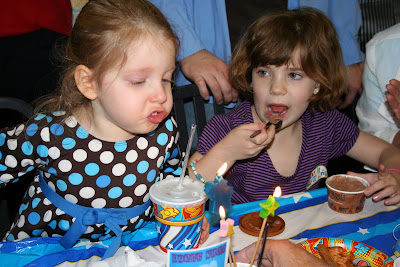 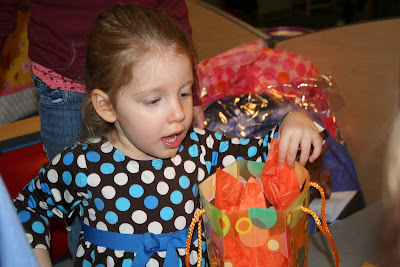 Upon opening her clothes, she exclaimed, "Ooooh! Laundry! Fanks!" She cracks me up. She also received a stuffed unicorn, which she calls a "pony wif a party hat! Nnnneigh! Happy birthday!"

She had a blast, which really was the most important thing. And now all this birthday hoopla can be laid to rest. Look at that big three year old girl! 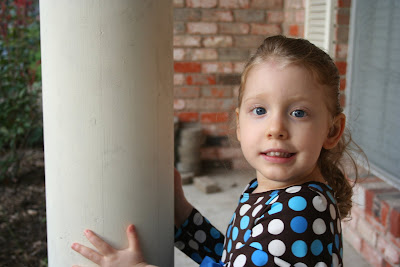 and she looks beautiful in that dress!

oooh laundry, fanks!! That's totally appropriate, if you think about it, since that's how it all ends up :)

Beautiful pictures, Kyla. I'm glad she had a blast!

Holy crap! The hearing aid! I'm glad it was fine and yes, that new rule is sound!

She look as beautiful as always and so glad it was a good---if crazy---time. :)

She looks so pretty in her party dress.

Glad she had such a blast.

(I just read a whole bunch here Kyla). Its hard not to be around for awhile.

I glad it was a success and that that beautiful 3 year old had a blast. Love the horse with a party hat :)

I love that dress and the unicorn story and the laundry. She's so adorable.
I find I can never get ahead in the rule making enough to forsee all future heart attack opportunities. SO very glad that was not lost.

OMG I love that last photo! And is that not the cutest party dress EVER? Yes, it is. Love her laundry comment... hilarious!

She is absolutely beautiful. I'm glad she had a great time.

she's a doll, and so sweet in her funky little dress.

the laundry comment cracked me up, too. it makes getting new clothes suddenly less appealing. :0

and all i can think of is: yes! try not to give mummy a heart attack by failing to inform her of the 2K hearing aid removal.

we've had that shock in my family too!

I would've been pooping my pants over the $2000 missing hearing aid. Sooooo glad it turned out okay but I'm sorry the CEC party was a bit of a flop for you. But glad KayTar enjoyed herself. Laundry! Ha! and Pony wif a party hat...oh she's great.

That dress rocks my world.

Phew on the hearing aid! I thought losing an EpiPen was bad but it doesn't come even close.

i've got some laundry for her if she's offering to do it!

"laundry, fanks!" I'm going to take her enthusiasm with me as I go about my daily laundry grind . . .

It amazes me that the hysteria of CEC never seems to bother the kids. Entirely different story for the adults. After last year's hooplah there we decided NEVER AGAIN. Unless until Adam is old enough to demand it! :)

So glad the hearing aid was found!

And I love that she calls clothes "laundry"! That's too funny!

Oh do I know the panic of a misplaced/lost hearing aid. Glad you found it and glad she had such a great time!

(And bubtar looks so incredibly handsome up there in the blue shirt!)

Oh I love all her Kaytarisms. She says such funny things. And just the telling of the hearing aid story made my heart skip a beat. I am so glad it had a happy ending.

She is such a beautiful little girl! I absolutely love her laundry response as well...she totally hit that on the nose!!