Oh, look at that! It's Superbowl Sunday.

We hate sports, basically, so Superbowl Sunday is just another Sunday for us. Josh is cleaning the garage, the kids are napping, and I'm on the computer, stalling before taking a Philosophy test. Other tasks I am avoiding include, but are not limited to laundry, putting away piles of Legos on the floor beside me, cleaning the bathroom sink, and changing the bedsheets. I am also delaying a trip to the store to buy a box of Legos to hot glue to BubTar's 100th Day of School t-shirt, just because I don't feel like leaving the house yet. Sometimes, I'm lazy.

A quick note on yesterday's post. I've LOVED all the input, really it is nice to see that kiddos this age sometimes do and sometimes don't have this particular awareness. It is always nice to find that something might not just be KayTar being so KayTar, it might be KayTar being human in general. I also think perhaps I left you all with a bit of a disadvantage because of where I chose to begin the script, so I will now give you a typical precursor to that particular section of the script of our lives.

KayTar: CRISS CROSS APPLESAUCE! (this somehow means, I would like to roll balls back and forth with you, BubTar. Don't ask. We speak a foreign language sometimes)

BubTar: I know! Let's play hide and seek with the balls! That will be fun! I'll be right back, KayTar. [scampers off with all the balls] 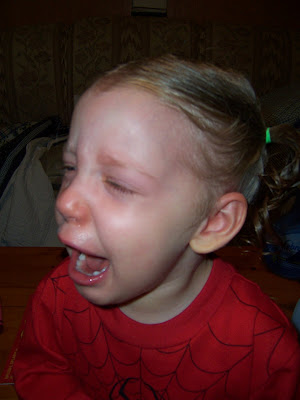 BubTar: KayTar, stop screaming at me. It hurts my FEELINGS!

BubTar: [flees the room in tears] 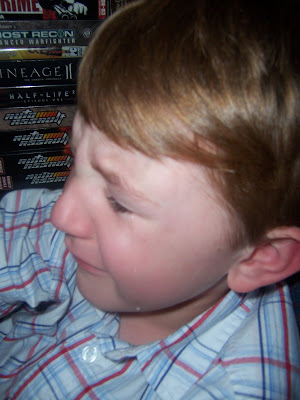 You see, this is our typical issue. KayTar has something in mind or is playing a certain way. BubTar steps in and interferes with her independent play or changes the rules of cooperative play, she gets confused and goes a wee bit ballistic. Once she combusts, we can't do anything but remove her from the situation to calm down. BubTar on the other hand is usually trying to be kind and jump in to play with her, or make things more fun. She loves playing hide and seek, so honestly, playing hide and seek with the balls sounds right up her alley. KayTar react explosively to his kindness and he is injured because he was just trying to be nice and she reacts in such a negative way. This happens roughly 600 times per day.

But in a situation like that, who is at fault, really? Yes, BubTar interfered with her play, but he was attempting to be nice (usually). Yes, KayTar OVERREACTS, but she isn't trying to be mean or hurtful, she feels violated somehow and reacts to it. She doesn't break his toys or hit or push him. She doesn't understand enough how emotions work to do something that purposefully elicits a negative reaction. So I am left with two children, both in tears, and I don't know the proper way to proceed, except to occasionally split them up and then practically sit on them while they play, even then, it continues to happen. I know this sibling stuff is normal and I know to an extent the frustrated screaming of toddlerhood can be normal, but it feels like I'm dealing with two people from separate and foreign cultures. They both keep perpetrating perceived wrongs based on the others culture and don't understand what they are doing that is offensive or hurtful. The natives are restless and from different tribes.

We always, always try to explain things. Although, the explanations go over KayTar's head and they don't do much to soothe poor BubTar's heart. We also have KayTar apologize for making him sad and hope that one day it will click for her. We explain to BubTar why she got so upset in the first place, too. But for now, it is the endless cycle of our days.

Well, that was NOT exactly a quick note and so the real post I was planning on for today will just have to wait. If anyone has further suggestions or input on this, keep it coming. It really is helpful.
Posted by Kyla at 12:52 PM

I have no clue what to tell you babe, those pictures just broke my heart.

I wonder if this is an issue of BubTar overestimating how well KayTar grasps his language. If you compare what she saw to what she heard, her reaction becomes more predictable: she heard blah blah blah, and saw him taking off with the ball. You would have to do it carefully to make sure that BubTar doesn't feel attacked or blamed, but it seems like he might be quite capable of grasping that he has to pay more attention to what she SEES of his behaviour, since she won't always understand or process his verbal input. That might be a way to empower him to predict her responses a bit better.

And really, what a sweet kid he is.

I have no words of wisdom, as my boys are under three and under one, but I'll be avidly reading the wisdom of others here.

Kyla. You are the LEAST lazy person I know.

And, um, as usual, I agree with bubandpie. Her suggestion is a good one, AND BubTar is such a gentleman.

Aw, those pictures are so sad :-(
You've really got your work cut out for you there and I have no experience to draw from to make any type of suggestion. But if you want to ask me anything about gluten I can probably help. B & P's idea sounds really good though!

God. Why is it always so hard?

If it makes you feel any better Hailey is always telling me that her brother just hit her or said a bad word or hurt her feelings. And yes, she she doesn't have a brother. She's making up and imaginary brother and fighting with him.

It's just instinctual at some level.

We have so much of that going on here too (I have two with autism). Transitioning every single thing, even down to preparing them that one is about to tell the other something, helps us somewhat.

Honestly, they just get in crying arguments all day long, so I don't have much to offer except commiseration.

Its so familiar. The 0 to 60 moment when all is well and it dissolves into tears and slammed doors and feeeelings.

We usually (not always we are human after all), try and get them to both talk to us about what happened and then go from there.

I agree with bubandpie. Also - Dash (age 8) loves to play with JAck JAck, but he does that same thing. If he tries to change up what they are doing or takes over something that Jack JAck started then it usually does not end well. Sometimes Jack Jack is ok, but other times he is frustrated with Dash. I would say you have a combination of normal sibling behavior compounded by KayTar's exceptionalness. I would say that you need to keep explaining...to both of them. And maybe one day they'll both get it.

i'm with flutter--those sad little pictures broke my heart, too!

That sounds like siblings with limited comprehension of each other, alright. For Pumpkinpie, this is when I step in and explain how it could have been solved by using her words, give her words to fill in, model how she could have handled it, and suggest she try that first next time. But pumpkinpie is highly verbal, and also doesn not have a sibling relationship with anyone she plays with so far, and I think sibling are even more explosive than other young kids.

Can I just come and kiss both your kids on their sweet little cheeks?