Today BubTar doesn't have school. KayTar had speech this morning, and because BubTar spent yesterday morning with my mom due to the Big Eval, I decided to just bring him along with us. He has never come before, because I try to keep his life as normal as possible and schedule him to spend time with people and do fun things in lieu of spending half his time in KayTar-related waiting rooms. He was oddly excited about going and I tried to make it clear it was pretty boring for the two of us, as we just sat quietly and watched the whole time. He was still excited, so I was happy he was coming along to see where we go each week.

Afterwards, I said, "Was it everything you thought it would be?"

And he said, "Mom, I thought there was a STAGE and I thought she could talk like a real WOMAN when I wasn't around. I thought she only acted like a baby at home. I thought we'd be watching her on the stage!"

I guess he has been thinking that she was living a double life as a famous orator who only PRETENDED to be a speech-impaired toddler. The reality was a bit of a let down, I think, just a bit of reading along with some manipulatives. I wonder what other bits of silliness live in that little brain of his. 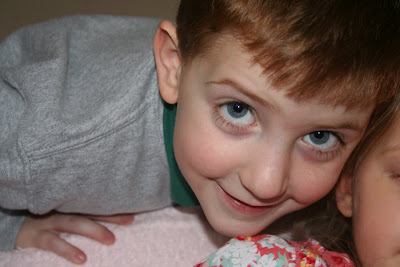 well, you know "speech" so she would be giving speeches. it makes a weird kind of sense. i often wonder what MQ thinks happens at places she hasn't been.

Hope you all have a good weekend! :)

Now that is funny! Not that BubTar felt let down, of course, but the fact that he had this whole other life for KayTar built up in his head.

I agree with Heidi. "talk like a real WOMAN"...OMG that could not be any funnier. I just have to think about him saying it and I break into a huge grin. :)

good for you for teaching him well.

"Talk like a real woman" Ohmygosh that is HYSTERICAL. Serioiusly, I'm still laughing.

Oh, the things a boys mind can dream up. I'm sorry he was let down by the "performance" but that is too too cute.

That Bubtar! That line was too funny. LOL. The things that kids come up with!

oh my! i seriously LOVE the hidden little ideas and fantasies in a kid's brain.

I just can't get beyond those big blue eyes! Pictures of Bubtar are always so spectacular.

yes, their inside thoughts can be so bemusing when they come out.

So let me get this straight - she doesn't lead a double life? Hey I used to wonder why my dad always packed a soupcase when he left on trips - what's with all the soup?

I liked it better when I thought he was carrying soup everywhere.

You know, it's funny but it's sad, too. Poor disappointed Bubtar.

Ha! I love the fact that he referred to her as a "WOMAN".

HE! You never know what is going on their little heads.

This made me laugh and laugh.

I love that kid.

Oh my, that is just fabulously funny! God Bless that kid!

On the stage! That's too funny...and understandable, too.

Oh how sweet. It just goes to prove that there are no flaws in the eyes of a child.....at least at that age- meanness comes later.