*So my lymph nodes and sinuses walk into a bar...

And sidle up to my lungs and they say "DUDE! Want to PARTY LIKE US?" and my lungs are all "ROCK ON!" and now I'm bordering on bronchitis. It is one big hacking, gagging, sniffling, snuffling party over here.

This morning Josh got BubTar ready for school without waking me (score!) and my mom picked up BubTar from school (score!) so today KayTar and I are just bumming around in our pajamas. It is actually a LOVELY way to spend the day. We've watched cartoons, played Guitar Hero (how much do I love KayTar telling me "YOU ROCK!" Even if she IS just reading the screen to me, she says it with such feeling!), read some books, colored, and just generally have been big ole bums. She's also made some important phone calls on her bottle, "What's yew name? Name IS KayTar! BYE!" or "Hello Ferapy (therapy)? No FERAPY a-day. Okay?! BYE!" She cut some paper with scissors. And she attempted to reply to some of my emails. It has been a busy, busy morning in the 'Tar household.

Week 1 of school went well. Tuesday I was mistaken for a fifteen year old, and last night I was told I was "very quiet" and "really smart"...which kind of means nerd, right? And the sad thing is, it's kind of true. I'm ahead in all my classes, except Philosophy, because I just got the textbook for it last night. I enjoy going to class. I enjoy engaging my brain a little. I especially enjoy the little welcome party my kids throw when I get home afterwards. I have time in the mornings after the boys leave and before KayTar wakes to read and study, and I can use naptime if needed. Plus, I made it to school while sick, which means I can totally do this, right? I'm really interested in all of the classes I'm taking, which lends itself to me staying on task, and my professor keeps things interesting as well. I feel good about this.

KayTar wouldn't be KayTar without mixing it up a bit, so the previous two mornings when I've checked her temperature (a habit I am in because she's been sick and feverish for two weeks) it was in the 95's! 95 is borderline hypothermic and she was indoors, in footsie pajamas, under her comforter, with our heat running. And we are in TEXAS not the Great White North. What is that about? She runs an average temperature when healthy, a nice midrange 98, so it is quite a deviation for her. Today, of course, it was normal, because KayTar can't make anything too obvious. She boggles my mind, that one.

To sum up; sick, boring, school, KayTar is weird, the end. That's about it for us. KayTar is napping, so I am now going to tuck myself into bed and spend some quality time with the cast of Scrubs until I drift off to Dreamland.

And for those of you who haven't seen my wittle baby face before, here you are. 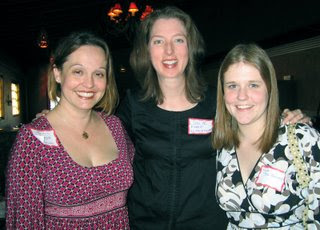 Jenny, Julie (who I stole this photo from), and me.

*alternately titled, "Why You Should Never Blog (or operate heavy machinery) While Taking Cold Medication" or maybe "Let Me Bore You With My Over-Medicated, Stream of Consciousness Ramblings"
Posted by Kyla at 12:36 PM

I like heavily-medicated stream of consiousness ramblings! And that was a great post. Sorry you are so sick but I am thrilled that you enjoy your classes so much!!

Oh, Kyla. So many viruses. I'm sorry. I hope the day off (sorta) has kicked your immune system into attack mode and that you can enjoy at least some of this weekend HEALTHY.

so glas school is going well!

I lol at 'Ferapy'.
Sounds like a rockin day though.
Hope you are feeling better.

Awesome picture...and Kyla, sounds like you are handling everything pretty well, despite your body conspiring against you. Clearly KayTar is right - YOU ROCK :)

So you got to be smart *and* pretty? No fair!

I'm loving you in school. You inspire me. And what a great family you have, all pitching in and helping care for the other Tars. Love it!

Hope your weekend is swell and you and the wee one are on the mend.

I'm totally coming down to play Guitar Hero with you someday. If for no other reason than to hear KayTar say "I rock!", when quite frankly I suck. It would be a good ego boost.

Hope you get lots of R&R this weekend. As crazy as things have been, I think you've handled it beautifully!!!

Poor sick Kyla. I did love this post, though.
You're so cute and baby-faced. Join my club, I tells ya!

You look like a HOT 15 year old though, so it's really a compliment.

Get some rest, sweetie.

The summary really cracked me up. You are clearly in school mode.

And nerd? Duh, Kyla -- you're a smart cookie. You're going to kick *ss

KayTar....keeping it interesting as usual I see.

Ah, I just want to pinch those fifteen-year-old looking cheeks.

Take care friend. You can ramble to me anytime.

Your "QUARANTINED" warning is funny, even though really - I wish you didn't need to have it there.

You can do anything and these past few weeks are testament to that for sure!

And oh, how I wish I had your attitude about learning when I was actually IN college. *sigh* the wisdom of years, all fifteen of yours! :)

hey, I happen to be a huge fan of stream of ... what were you saying again ;)

totally kidding, I read and enjoyed! Hope the cooties get banished from your place soon!

I'm right there with you--heavily medicated and hacking my lungs out--get some rest!

How do you do it? But I'm so glad school is working out.

Hey, you! Nice to see your face!

I hope you are feeling well again soon.

Ya that baby face is adorable! People will be paying BIG bucks to have that face in a few years! Count yourself lucky my friend! :)

I hope you feel better soon! I know you will do AWESOME in school!

Important calls on her bottle.

Heh. I loved that.

And you don't look 15. You look, appropriately, 20-something. Young 20-something, but still.

Your blogging is always interesting!! No matter your mood or state. Sorry you're sick...hope you're better very soon.

Isn't school so much more fun when you've had time to mature and know what you really want???? (And...you could easily be mistaken for a 15-year old!! Are you sure that isn't your yonger sister?)

I like me some ramblin' from a young looking brilliant woman with a daughter who puzzles her.

Complexity is sexy. Bring 'er on!

Live up the youthful look, babe, it serves you well later in life. I had the same problem in my 20s, and now I am GRATEFUL for missing ten year off my looks.

You people need to get well. I command it.

Glad school is going well and the sick day was all right. :)

you are cute as a bug's ear. no wonder those viruses keep swamping you...they're just smitten by your fresh-faced good looks.

you seem to have an amazing ability to juggle things that would leave me flat and panting on the floor...

Glad your 1st week went well. Your desire to learn is going to make this adventure so much more enjoyable and doable!

Totally jealous of the 15 year old comment. Age is soooo kind to you :)