We are HOME. We arrived at our door at 1:27am today. The kids were angels on the plane. ANGELS. Someone even complimented sweet KayTar on what a good girl she was (hint, it was not the woman sitting in front of her who REPEATEDLY had her seat kicked). It was totally different than the trip there in which I was almost bitten and was kicked a few dozen times. It went really well.

But BEFORE we got on the plane...well, that's a different story. Let's go back to Friday.

On Friday, BubTar started running fever, roughly a 102. I medicated him and put him to bed. He ran a little fever Saturday morning, but after his nap he woke up with a RAGING fever. It was at least a 103. At least. I medicated him to break it long enough to get through our flight. It worked. He was fever free until 3am yesterday, a couple hours after we got home. I checked it with the thermometer and it was in fact a 103. He is a sick little dude. Poor monkey.

Back to Saturday, my mom decided to keep our hotel room for the day, so the kids could rest rather than have to hang out somewhere unfamiliar until the flight. I could not be more thankful for this decision. Otherwise, we all might have gone insane. Really. We were teetering there for a bit.

We got to the airport and checked in with the sky cap and EVERYONE got boarding passes...EXCEPT ME. I got a slip of paper saying to go to the Gate to get mine, because evidently they were RUNNING OUT OF SEATS. Sonofabiscuit, I was getting on that plane with my kids. We attempted to hurry through to the gate, but I was TAGGED FOR A SEARCH. Great right? I got SEARCHED. Patted down, bags dumped, the whole deal. They wiped my stuff with this cloth to check for explosives I guess. And they aren't really jovial about this. I kept trying to make eye contact and smile because it is a little ridiculous, I was flagged because my ticketed name didn't match my ID (married name/non-married name)...not because I'm an actual threat. But the lady was NOT in the mood to return my smile. Sheesh. I was smiling because, HELLO! I MIGHT NOT GET A SEAT ON THE PLANE WITH MY KIDS AND INSTEAD OF RUSHING TO THE GATE TO GET MY PASS I AM STANDING HERE BEING SEARCHED, SO I AM GOING TO SMILE OR FLIP THE HELL OUT, THANKYOUVERYMUCH. But alas, she wouldn't smile.

In the meantime, my mom had the kids and all their crap:

Her carry-on
Her purse
KayTar's car seat
KayTar's stroller
BubTar's backpack
All of their shoes, not on their feet
KayTar (who can't walk quickly or effectively and must be pushed or carried)
BubTar (who was a sick little monkey)

back at security, unable to move because she doesn't have enough arms. FUN TIMES! Finally, I was deemed to not be a threat to national security, and was able to help her.

We got to the gate and I was behind some lady who was stuck there from a previous flight, bless her heart, but she was at that the desk forever. I felt for her, but I also didn't want to become her, left behind while my family flew away. I bounced around impatiently, but kindly, I smiled sympathetically when she would turn around and chatted with her....but DUDE. I wanted my boarding pass. I got it. YAY! But it was group C and my mom and BubTar were A's and KayTar was a B. The guy at the desk said, "Everyone board with the A's." But the boarding lady disagreed and made KayTar and I wait. It worked out well, though. My mom was able to save us all seat AND get KayTar's seat in there for us before we got on the plane.

And then the flight was was smooth like butter. No problems at all, except for the fact that I couldn't keep KayTar from putting her feet on the seat in front of her and pushing. I tried to redirect, but it wasn't happening...so I am sorry to the lady who sat right in front of her last night, but I promise the next time I am sitting anywhere in front of a kiddo who repeatedly kicks my seat, I will take my karmic payback like a good girl. Sometimes letting your kid kick a seat is the only thing between you and scream-induced insanity and I will be more than happy to repay that debt.

We are home. HOME!! And it feels like a victory. I'll do a wrap up post soon, but for now, I have a sickie BubTar to tend and some relaxing to do. I hope you all are doing well, and I'll be by to see you all soon. I've missed you! 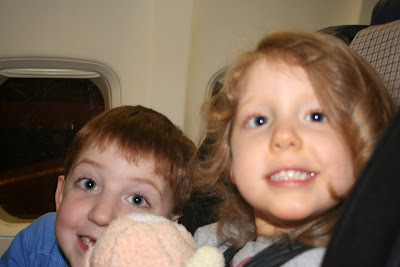 Kyla you are a trooper. In fact, you *all* are. That is a great picture!

I'm so glad you managed to get back safely, all of you, despite all those wrenches thrown into the mix. You handled in with amazing grace and patience, I must say!

We have seat-kickers--two of them, so I have vowed to NEVER EVER get annoyed at seat-kickers ever again...welcome back!

That sounds like it was its own brand of Hell. It probably makes being safely home, now, feel even sweeter.

Having raised seat kickers, I feel your pain. Reminds me of the time I took the kids to the circus. We were packed in these tiny little seats and cramped. I had Bug on my lap because he couldn't sit upright by himself and he was kicking his feet...which were casted from his latest foot surgery.

Lets just say he was not happy. And was sporting a large lump. Ever since I have taken my seat being kicked by kids with grace and am just thankful I have never been booted in the back of the head by a casted kid. LOL.

Glad you made it home safely.

Glad to hear you made it back. It sounds like an exhausting trip for everyone. Hope Bubtar is better soon.

Kyla! All you survived. Babe, you need a medal or a martini called a medal or something. You made it back home and that is what counts. Welcome back. Now, let's get sweet BubTar well before school starts!

well, they LOOK happy there on the plane! ;)

Travelling with kids is the most awesome thing ever, isn't it? It's like elective surgery, except with lots of yelling.
And now you're home! Safe and sound and everyone is better. Yay!

Hope BubTar feels better soon. We had something similar here over the holidays and it moved about rather swiftly. Hoping the same for you!

Home! Hooray! I'm getting exhausted and frazzled just thinking about it. I'm so glad you all made it back ... on the same flight.

Aww! Welcome home. Glad the trip back was better!

there are those sweet smiles!

Kyla,
You, the kids, the airport, the sickness, ubelievable! And those smiling faces in the midst of it all.

As you said, in a fiasco like that you have to either literally grin while bearing it, or you will be seriously ripping some ass somewhere along the line.

We missed you too!

You're amazing! Glad you made it back alright. Hope Bub feels better soon.

I am so very VERY glad that the flight portion was smooth ('cept for that lady in front - who I've been many times before but now know why - karma's a b*tch). Anyhow, I always knew you were a threat of some sort ;)

Glad you are back on terra firma and I hope Bubtar gets well FAST!

YAY!
what a voyage.

Next time some kid is kicking the back of my seat, I'm going to be nice, too...imagining that it could be your sweet little KayTar keeping herself sane on a crazy flight.

I am SOOO never taking my child on an airplane. You have quite effectively talked me out of it :)

Sounds like we all need to buy you margaritas on Satuday!

PS. Kaytar looks like an early 80's news anchorwoman in that picture. It might just be me.

"They wiped my stuff with this cloth to check for explosives..."

I first read it as:

"They wiped my butt with this cloth to check for explosives ..."

..and I was thinking OH SHIT!!! (literally.) Like, could it GET any worse? They think she has explosives up her butt?

What a trip!! Home was probably never sweeter!

Ugh. So, this post is also an ad to NOT fly with that airline you were clearly flying with if they can't even manage to keep families TOGETHER to board (Gawd forbid they just let you get on the d@mn plane first.)