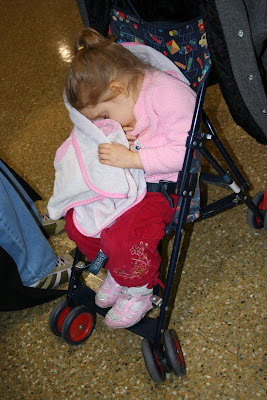 Episode in an airport, take two.

I should have given up this morning as soon as BubTar puked.

But I didn't. Obviously.

BubTar was feeling better, so we went ahead with plans. We packed and prepared and left for the airport. On the way, KayTar zoned out. Totally. She tucked her head into the crack of her car seat and stopped moving. Stopped talking. Just stopped. I looked and Josh and he looked at me, and we knew. We always know. We never quite accept it initially, though. So I said to my parents, "Maybe KayTar isn't quite right. You know. She might be having an---maybe, though. Just maybe." But we knew.

My mom suggested we go ahead and check the bags, we could always get them back if we had to. So we checked the bags. Then, of course, once the bags were taken away it was undoubtedly clear she WAS in fact having an episode, evidenced by the vomiting and writhing and disappearance of our lucid little baby girl. And then we had to track the bags down. While KayTar puked and cried. Exciting stuff.

Thankfully, the lovely clerk at Southwest rescheduled KayTar and I for tomorrow and BubTar went ahead and flew with my mother tonight. He was heartbroken when he found out we couldn't go. So tomorrow evening, once this is done and over, KayTar and I will fly out, too. For now, we're home waiting for our sweet girl to feel better and fully come back to us.

And it is just DAY ONE. Dude.

PS: Obviously me saying ANYTHING about not blogging for a few days is a BAD OMEN and it totally means I'll be blogging WAY MORE than usual.
Posted by Kyla at 8:55 PM

I just saw you pop into my Reader and thought, "Uh oh..."

could it be -- is it possible? -- that it's stomach flu and not an episode?

hugs to her, and you.

oh honey. i was so hoping you were in the air today. i am so sorry.

good lord, all that in one day. the grace, girl...the grace.

I think you need a do-over. Your year is not allowed to start until tomorrow.

I just saw a comment of yours at Beck's and thought "oh no, she's at home and not in the air", but I never would have conjured this picture.

I'm so sorry for you guys and hope and pray she's better tomorrow.

Oh crap, Crap, crap, crap. I am so sorry Kyla, sorry for you for you year staring off so awfully, and sorry for little Kaytar. I absolutely refuse to believe that this is any prediction of how 2008 will be, it's just a crappy, crappy couple of days.
Love to you.

I'm so sorry this has happened, but I'm glad you'll be able to go out tomorrow. And that Bub could go with your mom.

Oh honey! I am so sorry!
Ok... only good stuff for you in 2008!
You knocked out the bad early on.
I hope you have a good time on your trip tomorrow.
Hopefully everything will go as planned.
Much love to you,
Cori

oh Kyla. I hope you make it out tomorrow, and have a lovely time.

awwwww craaaaaaaaap. Oh honey I am so sorry.

Oh dear. I hope she gets better soon.

Crap on a crap cracker.

I'm so sorry. What a start to the year.

Ugh, so sorry to hear it. I've been following along and hoping that this wouldn't happen.

Noooo! That absolutely sucks! You poor things.... all three of you. I am so sorry! Good luck today.

So the year is only going to get better from this point on. I PROMISE.
Safe travels.

I wondered why you were commenting... so sorry! Nowhere to go but up - literally AND figuratively. Safe travel...

maybe your karma still things its '07.
am hoping and hoping for you this is NOT an omen.

It's good to get the yuck out of the way to make room for all the good stuff in 2008. Right? Bring on the extra good stuff. Quickly!

Dammit, Kyla. I am so, so, so sorry. I hope she is feeling better now. It's.just.not.fair.

If it's any consolation I've been there--airport, puke, crying, zoning out, horrific mess. I hope she's 100% better tomorrow...

And as an interesting aside, T.'s neurologist thought that it could be possible that the bright fluorescent lights and noises of an airport could trigger episodes. I know we've had two at airports and it sounds like you've had your fair share...

Oh Kyla. That stinks. I saw your name in Reader and comments and was all huh?

Okay it sounds like you got it all taken care of, but still. Sorry. That's rough.

I hope tomorrow is better.

Maybe Day 2 will be better.

Just think of it as getting things out of the EARLY in the year...it's all about perspective right? ((Hugs)) cootie friend and enjoy your trip, should your children allow you to do so!

I'm so so sorry - I was thinking about you last night - HUGS.

Hope you're able to fly out tonight and join the family. BubTar is such a big boy...going on without you. What a man!

I am so sorry Kyla and Kaytar, I winced when I read the post title in my reader. I hope everything went smoothly today (no post is a good sign right?)

i am so freakin' outta the loop here! it is now wednesday and i hope it all went ok.

Aw, that sucks, hon. Maybe 2008 just wants to make sure that it can only get better from here? Maybe?
Wishing you and yours happiness and root of happiness...

It's now Jan 3 - not another post - that's a good sign!!! Hope all is well, everyone recovered and having a great vacation.

Oh no! I am so sorry - that is the suckiest way for me to return to your blog to get caught up. I hope sweet KayTar is feeling better. Big hugs.

Oh Kyla, I'm just catching up. I'm so sorry. What a crappy start to the new year. I hope it gets better and I wish calm and health for all of you.

Oh, good gravy. Poor kid. Poor you.
I hope she recovers quickly and you both get to attend, Kyla.

Darn it, darn it.