Oh, that KayTar. She's amazing. She did really well today, from what I gather. We were there for roughly 3 hours and while she was entertained/tested by six or so specialists, they took turns interviewing me and having me fill out paperwork. I didn't pay a whole lot of attention to how she was "performing" per say. But she was happy and attentive mostly and she stole their hearts with her adorable braininess. All of the evaluators were female and they all said, "We NEVER get little girls. We might get one girl for every ten boys we see." Her stripey sweater and curly blonde ponytail gave her major bonus points. ;) Nothing is finalized yet, and we aren't even to the point of discussing classroom placement, but this is the summary from thus far. For the record, I loved ALL of the evaluators. They were great with her and attentive and kind and it was a positive experience. For all the worries I've had about this process, thus far, I haven't been displeased a single time.

Let's start with OT. She had KayTar play with a variety of textures, including shaving cream. KayTar was NOT a fan, but she sat at the table and obligingly put her finger in. Then she asked to wash her hands for the rest of the time. When they ignored her (purposefully) she took one of their hands and wiped her hands clean using theirs. She was well-behaved, but clearly showed some strong sensory preferences. Her fine motor, though, is excellent as it always has been. She is recommending OT for sensory/feeding purposes, not fine motor purposes, which I wholeheartedly agree with.

The physical therapist was great. She took a lot of time asking me about KayTar and watched her in action and had her attempt a few things. She also took a good look at her feet and legs and strongly recommended seeing an orthopedist. She said if nothing else, KayTar needs orthotics in her shoes. She said once her feet are more supported, her joints and muscles might start to tighten a bit and her body will feel safer and more balanced. She said the hypermobile joints and hypotonia aren't helping her poor balance, which is perfectly logical and I kind of wish her old PT would have made these suggestions early. She is going to review the preschool curriculum and determine whether KayTar will be able to function well without PT services and do what will be required of her. She still isn't able to run or jump, and she won't walk on uneven terrain (grass, mulch, sand) so we'll see.

The SLP was with KayTar almost the entire time, making notes and checking her comprehension and the like. She spoke with me before and after and asked periodic questions in between. She picked up on some of Katie's canned answers and such, but because I was so busy talking with everyone, I don't know exactly how she did. I think she presented a pretty typical for her type of speech, although I don't think she did any echolalia or direct mimicry. For the most part, I think it was a very accurate picture.

She is going to have an autism evaluation with the school psychologist, who was in and out today, but not technically evaluating. We are totally on board with this, because so many of KayTar's quirks do fall in the spectrum. I'm actually looking forward to it, just to see what she has to say.

Otherwise, KayTar was polite and well mannered and an entertaining delight. They were enamored with her. She made her preferences clear, but was pretty even keeled. Unfortunately, that isn't always the case, but it sure makes for a wonderful first impression. They were excited that she knows so much and said that in many areas she is above age level. She has a memory like a steel trap and learns quickly. All in all, I think it went swimmingly. I hope that they saw enough of each side to place her properly and I am thrilled that she will be having a behavioral evaluation because I think at this point, lots of her delayed areas fall into that category. Her speech is quirky, her senses are quirky, her balance is quirky, her reading is a quirk all on its own. Cognitively, she's a little ahead of the game, I think. But behaviorally, I'm not sure where she falls.

Anyway, long story short, she was adorable and I think it went well. The next step is the autism evaluation and then the Big Meeting where we talk placement. I am happy to say, thus far, this is has been a very positive experience...nerves notwithstanding.

Now I must scamper off and take care of a few things before class tonight. Oh, and in case you are dying to know, I am a straight A student thus far. In Philosophy I have a perfect grade and my lowest grade overall is 95. I am pleased.

And hey! Look at this handsome guy! 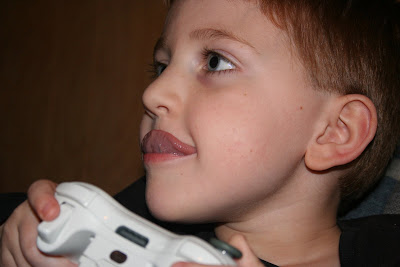 I happened to have a photo befitting Theme Thursday and decided to play along since I'm double posting today. The theme is "Focus" and he certainly was focused, little tongue peeking out and all. Video games are serious business!
Posted by Kyla at 2:13 PM

During my nap today (I'm still sick as a dog) I dreamt that I was babysitting Bubtar and it was so much fun. The phone rang while I slept and I dreamt that it was Bubtar calling to thank me for babysitting. Cool, huh!

I'm so glad that it went so well!! That must be a huge relief. It sounds like she will be in good hands.

And great job on the school work!!

Glad it went well, that is great news! Love the photo of your little man, too...very focused. ;)

Great news about the evaluations. Sounds like things are really moving the right way.

Oh really is anyone surprised that Kaytar stole all their hearts? She's stolen all of ours just seeing her through your eyes. I am so glad it went well and am thrilled to hear that everyone was so kind and so thorough.

I totally do the tongue thing too.

And it's super DUPER cool that the sessions went so well. :) big grin

Yay, Kay-Tar! Yay, Kyla! Atta focus Bub-Tar! This was such a relief to read.

Glad the evaluation went so well! :)

It sounds like it did go well. My kids also have hypermobile joints, including some tmj issues. Makes me wonder if any of that is related to her eating aversions? I'm not suggesting that is all of the issue, but there were times they didn't eat because of tmj pain. Just a thought.

hey, hugs! yay! just wanted to mention that if you ever need an ear, i have lots of experience with the feeding issues, sensory integration, and related stuff with D. hang in there. it sounds like K is a trooper!

nice work little girl! BubTar is such a handsome guy, he looks just like Josh.

If you hold your tongue in the right spot... then you'll win the game! :)

You and KayTar are both rockin' it...good for you both. I am not sure how you juggle everything. I am new to the blogosphere, but from what I have read in your neck of the woods, life is chaotic to say the least...a straight A student! Keep up the good work! I will keep you all in my prayers. Hope things go well with placement.

Okay, that tongue made me LAUGH out loud. I do that, M does that, my mom does that...it's a sure sign of extreme FOCUS.

Now on to KayTar. YAHOO!!! I'm so glad everyone was tuned into KayTar and her needs. That's awesome. I hope the rest is as positive for all of you.

As for KayTar, I'm just overjoyed that today was such a success! KayTar is amazing and I'm so glad that her evaluators witnessed that. I'm excited about the new info you'll be getting soon!

As for BubTar, boy am I familiar with photos like that from Adam! You've mentioned Bub does it too...fun to see it in action. :)

As for you, you go with your bad self, Mrs Smarty Pants! Woo hoo!

I'm glad it went well--what a relief. And not you just need to sit back and wait!

so glad it went well!

I've given you an award over at my place. :)

Oh Kyla, yay! I'm so glad she showed them exactly who she is. I'm happy it went so well and trust that she'll indeed get the proper placement.

I guess I'm looking forward to the next steps too...the autism eval and the placement.

That picture of Bub is great and woo hoo on your straight A's. :)

Awesome, Kyla! Thanks for the update. And great shot of BubTar.

that's great it went so well! glad she had a positive experience. she sounds like a little trooper.

sounds like it went ok! and keep us posted--i am interested to here what they say, if at all, about hyperlexia.

Sounds like a good start. And I'm glad she charmed the pants off them. :)

Ha - Misterpie does that with his tongue, too!

Glad it went so well and that overall, it's been really positive for you. It's nice to see other people finding the same things that you do, too, I'll bet.

I'm so glad you had a positive experience - such a relief!

The girl genius is following in her mother's footsteps.
Glad to hear it all went well.