This morning the neurologist called. The lab just put the report in last week, but he was in Canada at a conference, probably eating yummy chocolates and enjoying some free healthcare. The results are seizure free, so the eye deviations are not seizures from what we gather. She showed a spike wave while sleeping, but it was an "extremely rare" occurrence so he isn't concerned about it.

We spoke about the recent revelations that the CSF tests have given us. He concurred that KayTar doesn't really fit the typical picture, then he said, "But KayTar has never been one for typical." So very true. He agrees that the testing plan is a good one.

While I had him on the phone, I brought up the recent light sensitivity, because it is getting a little ridiculous. Saturday at Jenny's, KayTar was able to be outside for about 20 minutes, which is the longest she's been outdoors in at least two weeks, probably closer to a month. The light sensitivity has gone from something that happened only alongside episodes to an almost full time condition. Even behind sunglasses or tinted car windows it is too much for her to bear, if she is facing into the sun. If the light streams in the car window, she is thrashing and shrieking. Even with sunglasses on, I have to put her blanket over her head to walk into the therapy building from the car. We were supposed to go on vacation this week, but we had to cancel because it would be torture for her to have to be in the car for a prolonged period of time. He said he didn't really know what to make of it, but he would think on it and get back to me. He also recommended calling the ophthalmologist and speaking with her. KayTar had a normal eye exam in April, but this was not happening at that time. Her eyes have also been crossing some, in addition to the deviating we typically see. I put a call in to ophtho and we now have an appointment for Halloween. We also have a weight check appointment with the pediatrician on Halloween. Double header, gotta love it.

When we got that call last Tuesday, I remember feeling like the whole world had sped up. Everything was moving so fast after a year of moving at a snail's pace. Try as I might, I can't quite reclaim that high. It has been replaced by the feeling of normalcy, our normalcy, which probably isn't normal in the least. The testing and waiting, the phone calls and questions, the symptoms and appointments; these things have been our dance, the rhythm that marked the passing of seconds, minutes, hours, and days.

The seconds it takes to fill out a lab request form; the minutes sitting in the chair, restraining KayTar long enough to get a good stick; the hours we wait for a urine sample; the days it take to get results.

The seconds before her eyes come back down where they belong; the minutes we are allowed to stay outside; the hours it takes for an episode to end; the days we have between them.

It is our dance and we've learned the steps well, but in light of the phone call last week, I can't help but entertain the thought that maybe one day soon, we'll have a whole new dance to learn, with a rhythm marked only by the beating of our hearts, the ticking of the clock, and the rising and setting of the sun. 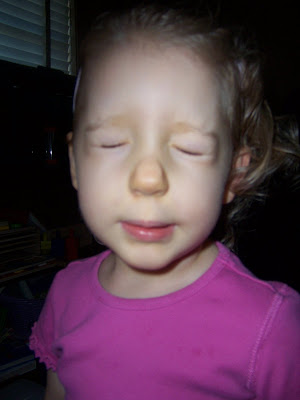 Oh Kyla I hope so.
I don't know how you do it. Julia's minor medication mixup this weekend has got me contemplating meds for me.
I have this great image of your neuro tossing back smarties and partying it up here.

Whichever dance you end up performing, friend, I know you will be ever graceful out there on the stage.

I hope the ophthalmologist might have some answers for you about the sensitivity to light. Poor KayTar.

I just want to send you out some (((HUGS))). You are a wonderful Mommy.

I love the way you describe this rythym as a dance, so very poetic. I have confidence that you are turning a corner, at the very least revving up that waltz to a tango.

A new dance will be lovely... full of grace and surefootedness I'm sure.

Hang in there. You are doing so well. Here's hoping you have to learn steps to a new dance really soon..

Poor little peanut..I am so sorry, again, for all the waiting and hoping.

We had a neuro appointment today and I realized the last time T. had an episode was August 25th. Of course as soon as I realized it and felt excited I got that feeling that I jinxed things. Let's hope not.

I hope that is your new reality very, very soon, friend.

I hope so with all my heart, Kyla. What a lovely, lovely decription for something so frustrating. It;s true, it has been your normal rhythm, but I hope soon you are forced to adapt to a normal a little closer to a doctor-free normal.

I hope some new dancing (some all out boogying perhaps) is in your near future. In the meantime you have this current dance down to perfection and the way you describe it is just poetry.

How do you make words that make me tear because of the pain behind the, so melodic and poetic? You are a gifted and strong person. I'd better think of something funny to say or you might think I've gone all serious or somethin';)

You are so strong, friend.

I keep holding my breath.

Every time I see you've posted I get excited because it's like getting to read the next chapter of a very captivating novel... only it's not a novel it's your life and I know it's not easy. I keep hoping for that fairy tale happy ending. Some day. (((HUGS)))

Gosh I just love your writing.

I really hope you get answers soon. This light sensitivity is really interesting. I hope it is another clue to something and that they can "fix" it. :)

oh sister. your bravery of spirit. it gets me every single time.

just come here, bring you over here and let me hug you.

You are really amazing.

Its been ages since I commented but I just want you to know you still inspire me--your whole darn family does.

Hugs and prayers for KayTar...and for you. You're such an amazing mom, an amazing "dancer".

Oh Kyla, I think of you all the time and hope you get your answers. soon. You are an awesome Mom. And that little photo warmed my heart.

I hope that new dance becomes a reality before you know it.

Fingers crossed. I think we have to make our own 'normal,' and I also sympathize with life being permanently stuck on fast forward.
BEst wishes

I know a bit about how hard and disheartening this all is, and I have to say how much I admire your grace and courage.
Hope that all of her appointments bear excellent fruit.

this was a gorgeously written piece.

and there is no normalcy. you guys are just perfect.

I have a feeling that new dance is right around the corner for you guys.

You know, the English professor in me just can't help commenting on the beauty of the writing here, Kyla. The parallelism, the rhythm, the imagery, and the pace. Truly a gorgeous and effective piece of prose.

In terms of, urrr, what you're actually communicating? I can imagine you're let down from the high of last week. It would be hard to sustain that, and in any case, it just means more tests and yet more waiting, yet more ticking out of seconds and minutes and hours and days.

You bear it well. You're making progress. Things move forward.

Oh Kyla,
This post and the one above just break my heart. Whether you dance for joy or dance in a holding pattern, I'm listening.