I think I've been a neglectful blogger of late. Sorry about that. I don't really know what it is, I just feel tired and puny. All I want to do by the end of the day is lay on the sofa and watch bad chick flicks or Grey's Anatomy reruns. I think I've been doing a decent job of making the commenting rounds in spite of it, but the posting hasn't been so hot. I just feel some sort of general malaise. Blech. Maybe it is some sort of physical response to the stress release we has last month. We have almost-sorta-maybe answers now!! We do have answers to all the scariest questions and that has been no small relief. Maybe I've been running on undiluted stress for the past 8 months or so and once it started to dissipate I slipped into a mental coma of sorts. Who knows what it is, but I have noticed it, that's all I'm saying. The first step is admitting you have a problem, right? So there it is.

You know that thing I'm really not talking about because of the imminent jinxing? Yeah, I remember the whole "throwing down the gauntlet" speech I made, but I'd rather not tempt fate more than I have to. Well, if I was to be talking about that THING, I'd say we are on day 31 without having one. Yeah. The record is 32 days. This is exciting stuff! The previous record was set while on preventative medication, she is currently med-free!!

On the other hand, she has randomly thrown up two nights in a row which is not so exciting. Monday she was reluctant to eat anything and extremely gaggy, the sight of her food would bring on the gags. I was only able to coerce her into eating yogurt, which is our failsafe food. She threw up at 11 last night. She was up until about 12:30am. Today her senses didn't seem to be on such high alert, but she was a little bit lazy and very cranky. She threw up at 9 tonight, she is currently enjoying some Charlie and Lola in her beloved baby papasan seat. The rule is, if you throw up, you get whatever you want within reason. *lol* We will try to put her down around 10:30, in hopes her tummy as settled. I hope there won't be any more vomit tonight.

In lieu of finding some way to wrap this up, I leave you with these photos. Her hair just spontaneously curled like that as I started to brush it this morning. Crazy curls! 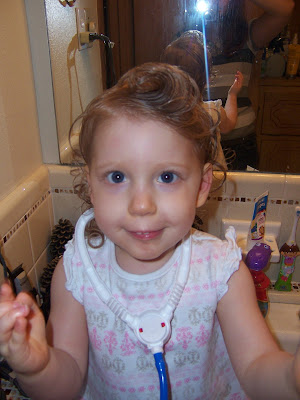 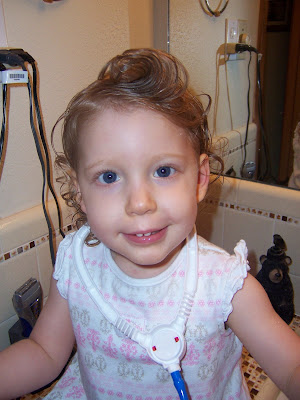 Nevermind the stethoscope, she is incessantly listening to her own heart these days. I don't know why, its not like she goes to the doctor all that often. Ha!
Posted by Kyla at 8:35 PM

And yay for the number 31! What? It's not important, noway, nohow. I don't know what you're talking about Fate. Move along, please.

GA re-runs are the best. So are GA marathons... I find watching four episodes back to back does wonders :)

Those are some excellent curls. And take a break if you need a break! If anyone has good cause to be worn out, it's you! So go, enjoy your Grey's Anatomy and get some rest.

Yeah, I always find that I can keep going through the stressful times and then crash when the stress is relieved. But it's awfully nice that you've still been doing the comment rounds. That's always the first to go for me.

She could have a bug. Swee'pea stopped eating on the weekend, and didn't throw up but he had diarrhea, but I stopped eating yesterday and threw up last night. So I think we certainly have a bug going around.

Em: I recently started rewatching GA on DVD. I've been watching it for 3 years now, mostly with Josh in the room and do you know what he said to me after I rewatched the first episode? "Oh, their SURGEONS? Really? That's what this is about?" LMAO! How did he miss that! He is actually half watching them with me, but pretending not too, because he's always ragging on the show. Now I think he likes it. *lol*

Beck: I will now feel free to take a break, because the Queen of Bonus Holidays has given me leave. :)
Sin: Last night I asked Josh, "Do you think she's SICK?" And he said "Would we even know was a normal sick kid looked like at this point?" *lol*

Hey Kyla! I am on a business trip and can't play along with the Mamapop AI comments. I should be home tonight in time for the vote-off show.

thanks for wondering about me!