Okay, the story for today is not from when he was two...it is from last night. It was so adorable I had to share it. First a little backstory, we play a made up game called "The Talking Sheet", basically he hides under his covers and talks in a funny voice and interviews me, asking things like "What's your favorite TV show?" or any number of other questions.

Last night the Talking Sheet was back, and I asked "What does BubTar want the MOST for his birthday?" (sometimes I get to interview the Sheet, too, and he knows all sorts of things about BubTar) The Sheet said "Better Batter Baseball" and we chatted for a moment or two and then I said "Talking Sheet, can I talk to BubTar now?" and out popped BubTar in the usual manner...but then this is what he said, "You know I was in there WITH the Talking Sheet...we were working together. Actually, the Talking Sheet is on vacation and he asked me to say his lines for him while he is gone." How clever is that?!? How does he know what "lines" are? And then, I asked "Where did he go for vacation?" And the reply was "Canada, you know, to visit my friend."

Then I hugged him and kissed him and tucked him in...a few minutes later he came to his door asking for cuddles, but I was in the middle of writing out (extremely last minute) invitations for a few kids in his class (because KayTar has made it largely impossible to get anything done this week, sick all day and staying awake until midnight). After I finished the invitations, I went up to his room and he was almost asleep. I said "I came to cuddle with you, Bub." and he sleepily mumbled "Oh, thank you, Mom." and curled up into me. He's always been such a cuddler, he was our co-sleeper for a very long time. When he moved to his toddler bed in our room, we still had to lay with him at night until he fell asleep. He loves when Josh is out of town, because he gets to take over Daddy's spot in the bed...or when he is sick and Daddy willingly vacates the bed so BubTar can get more Mommy snuggles. I just cannot believe I've been snuggling that sweet boy for 5 years, it doesn't seem possible...and there he was lying beside me, this great big kid. His pudge is gone...his fat little hands, his big chubby cheeks, even his little round belly we thought he'd never outgrow...but as I watched his chest rise and fall and looked at his beautiful lashes and the perfect curve of his rosy cheek, I could see every cuddle we've ever shared reflected there.

On to the two year old goodies!

This was a big year...BubTar gots his own room and his own sister! This was my favorite Christmas, because he was aware of all the magic. It was beautiful and exciting. He sobbed and made Josh feel like the Grinch when it was time to take down the decorations. As a final insult, Josh forget to take the stockings down until the next day and BubTar cried like his very heart was being ripped from his chest when those stockings came down. This was the year he really started to become that real wholly separate person who we could talk to and have great fun with. I remember Josh saying "Can't the new baby just start out at this age? It is so perfect." This was the year his baby fat started to melt slowly away. *sob* I got a video camera this year and the videos are just breathtaking...my sweet little man in all his adorable, gruff-voiced, baby talking, slightly chubby glory. The highlight of the video is when he sings "Santa Claus is Coming to Town" or maybe when he talks to himself in the video camera like he is another person, "Come on BubTar, I'll show you my room...see? This is my room BubTar. This is my kitchen...mmm, BACON, BubTar." I wish they were digital so I could share. These photos will have to do. 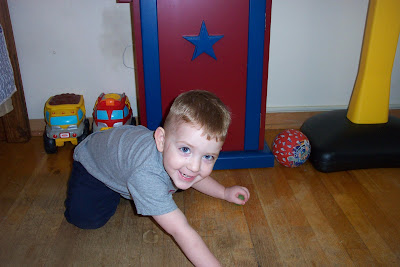 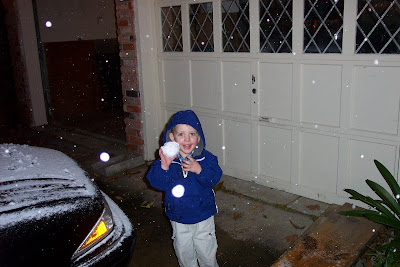 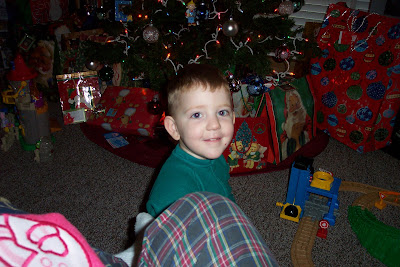 I love this next one, because I can tell he was saying "Choo choo!" 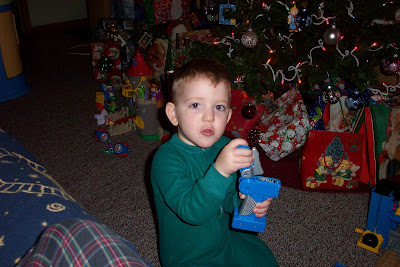 At the hospital after KayTar was born, she's that pink blob in the bassinet back there. *lol* 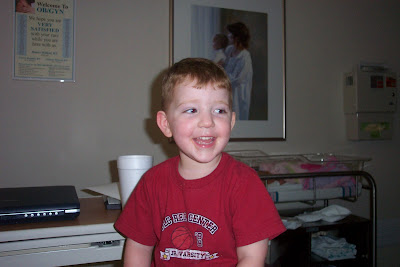 His grin in this photo is priceless. 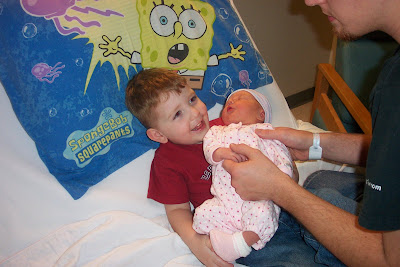 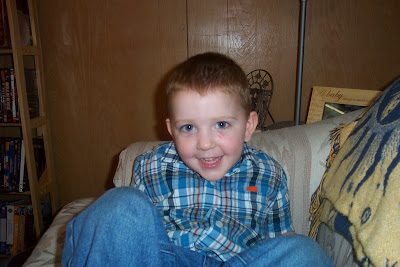 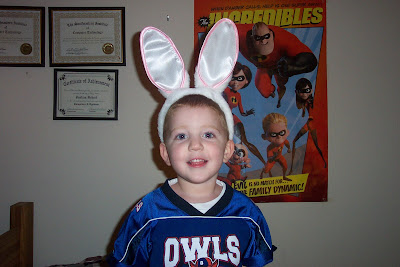 On his third birthday: 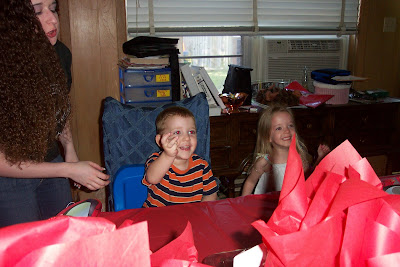 The feel of them, of their breath and their warmth, when they snuggle in beside you. That is a paradise we are given on this earth.

I was doing alright reading until I got to the last-night-snuggle part and then I had to leave for a minute to get a kleenex.

I hope BubTar has an AMAZING 5th birthday.

Oh how I wish I had a snuggle bug like that. Maybe #2 will be my snuggler? Right now he doesn't have a choice. Ha! That was such a sweet little story. You're right, he does remind me a lot of E-Tar. :) Or is it the other way around? Either way, I'm loving the BubTar pics and stories.

Ok, it's official. BubTar could not be any funnier, cuter or smarter. You are such a lucky mama!

Some time you will have to tell me how you transitioned from the cosleeping to him sleeping on his own. Adam is a HUGE cuddle bear as well. :)

paradise is exactly right. in all ways.

Hi Kyla, just chiming in to say BubTar is adorable at every possible age. I've been lurking/keeping up via bloglines and now am overhwhelmed realizing that it's been forever since I've actually said hello.

It's so wonderful to follow your path of memories.

That little wee face. What an amazing little boy (and good think the Talking Sheet can tell you what BubTar really wants, or you'd be lost!).