I recently ordered/read Living Well with Mitochondrial Disease by Christy Balcells. At this point in time, KayTar is not diagnosed as having mitochondrial disease, although it is thought to be the most likely suspect for her medical issues. She is simply categorized as having a unspecified metabolic myopathy for now...however, I found a LOT of the information in the book applied to KayTar, diagnosis or no. 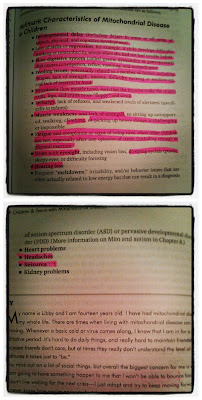 The book gives a great overview of what mitochondrial disease and good explanations (both simple and complex in different sections of the book) of the biochemistry of it. It gives a good overview of systems that tend to be affected (though, I noticed respiratory was not listed and I know many mito kids have issues with that) and what symptoms present most commonly. It spanned infancy to adulthood and diagnosis to palliative/hospice care. The only fault I can find with the book is that there was not a lot of information for what to DO about symptoms...gastroparesis is mentioned, but the testing, medications, and treatments for it are not explored in detail, for example. The book would likely be much too long if it went into all of these little details, but I think a more in-depth symptom management guide might be a helpful companion book to this one, if the author feels inclined to write another! The two portions that were most helpful for me were the section on hydration and creating/keeping a medical binder.

Appropriate levels of hydration are very important to people with mitochondrial disease...or with any metabolic deficiencies...or any of us as humans, really. It is MORE important when something isn't working quite right, though. According to the Holliday-Seger Formula for Maintenance Fluids that is provided in the book, KayTar should be getting 1540ml of fluid daily (based on her 22.2 kg weight) on a healthy, not overly hot day that she spends indoors. She only consistently gets about 960ml per day from her feeds/formula and I didn't realize she was getting sub-optimal fluid until now! She really struggled last summer and I wonder now if some of that was compounded by the heat and deficit in her fluids. So a few days ago, I decided to start tracking her PO intake a little better. I put a sippy cup of water in the fridge with 8 ounces in it and told her to get her drinks (as much or as little as she wanted) from that cup through the day instead of paper cups in the bathroom, ect, because I was going to measure how much she was drinking. She was VERY excited about it for some reason, so the intake her first day was WAY better than I thought. 10 ounces! I think the novelty of the situation had a bit of an impact...she said it was "like a video game". The second day she drank about the same PO, but she had to miss a whole feed because her gastroparesis was acting up (insurance is giving us crap about getting her prokinetic refilled). Yesterday was a more normal day, only 2 ounces PO. The novelty has officially worn off! Over 3 days, her highest fluid intake was 1260ml and her lowest was 1020ml. In case you don't speak in mls, she is roughly 8-16 ounces short on fluid every day. So we're going to have to figure out a way to bolus her with Gatorade throughout the day, perhaps it will help prevent the slump she was in last summer. (As an aside, I've been using the new MitoAction app to track her fluids, meds, symptoms...it isn't perfect, but it is super handy!)

The book recommends keeping a medical binder in both virtual and hard copy form...a good recommendation no matter what kind of medically complex kiddo you have! Page 1 should be a contact list, all physicians (all contacts for them, clinic, cell, fax, email...whatever you have), and 3 emergency contacts. Page 2 should be a copy of the front and back of current insurance card (and medical record #, if you happen to know it). Page 3 should be a current list of all medications (daily and PRN) with strengths, dosages, frequency. I used Google Docs for all of this because it is accessible from anywhere and I also printed a hard copy. The next sections are a bit trickier for us, so I had to make notes to get things from physicians at our next visits. The section after Medications should be Diagnosis. We don't have one! If you are like us, the book recommends getting copies of pertinent testing and results (that are applicable to the possible dx) and a H&P from the referring doc or specialist that is investigating. I also stuck a copy of The Visual Guide to KayTar in there. The following section is Emergency Protocols. We don't have any right now, but I took a photo of the pediatrician's RX from KayTar's last MRI stating she needs D5 1/2NS rather than any other fluid when sedated, fasting, or in need of IV fluids, due to her metabolic disorder. It will be a placeholder until I get a standing order written up from the pediatrician on her letter head. After that comes Notes from Specialists, with most recent copies of clinic notes and test results. Then the final section is Hospitalization records, where you can keep discharge summaries. It seems to be a pretty thorough system (and is covered in a more detailed manner in the book) and I have some collecting to do before ours is in working order!

The book was definitely worth the purchase price (Amazon has the best price!) and I have obviously found information that is applicable to us now out here in No Diagnosis Land and information that might be applicable to us in the future as well. While it isn't as thorough in some areas as I would have liked, it gives a very good overview and a lot of excellent general information that applies to mitochondrial disease and conditions like it. It is written in a very reader-friendly way and I would feel comfortable passing it along to family members, friends, or people who work with KayTar to give them a better idea of what is going on with her...they wouldn't need to read all of it, of course, but some of the sections would be very informative for them regardless of how medically-savvy they are.
Posted by Kyla at 11:30 AM

I take care of a patient with septo-optic dysplasia and he needs to get free water every day so his sodium levels don't get wonky. He is able to take PO but as he's gotten older, he's gotten pickier about what he will and won't take PO. Some days are better than others. He got a G-tube a few years back so we don't have to worry about if today is a picky day for him. He gets free water at school at lunchtime via gravity and it takes less than five minutes. I don't know if that would be an option with Kay's gastroparesis (to have a quick gravity drip vs. pump slowly) but it might be something to consider.

I haven't gotten the book yet, I want to get it but I have been dragging my feet I guess I'm waiting to see what Dr. Gibson says. To see if he suspects mito.