KayTar had another sleep study on Friday night. Overall, I think it went better than the last. We were at a different facility in a different hospital system and even though both are supposed to be geared towards children, this one did a MUCH better job with KayTar. At the last facility, they were not very friendly and they were very forceful and rushed in getting KayTar hooked up and into bed. This time, our tech was WONDERFUL. During the 12 hours we spent there, she gave KayTar a roll of pink Coban wrap with hearts on it, a pink light-up wand, a Little Miss Princess notebook, an Avengers pen/necklace, stickers, a popsicle for breakfast, and she hooked up her gorilla and made plans to get a name badge holder for KayTar for the next time she has a sleep study. She was great with KayTar, very friendly and patient, and let us stick to our usual bedtime routines even though it meant KayTar went to sleep later than usual. The facility itself was also much nicer, instead of a single hospital bed in the room, there was a very comfortable double bed. KayTar said, "Oh my gosh, they gave us a hotel room!" 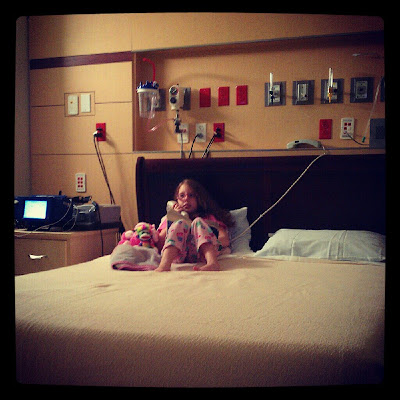 Once the girls (KayTar and her gorilla) were hooked up and in bed, KayTar was allowed to read for a half hour, as usual, and I followed the tech into the hall to ask her to watch for/make note of any breath-holding KayTar did during reading time (without drawing K's attention to it, didn't want her overthinking it and changing her normal behavior). She thanked me for reminding her because the pulmonologist had mentioned it in her notes. In the morning, she told me she was able to catch some of those spells during reading and she noted it for the doctor. Hopefully, even if we still don't know why it happens, catching it in action will at least tell us if it is something we need to be concerned or not about since she was hooked up to EEG, EKG, and oxygen/CO2 monitors at the time.

As for the sleep itself, it was rough! If you've never had the pleasure of having a "sleep" study (it deserves the air quotes, believe me), it is not very restful. Poor KayTar was so hooked up (she had electrodes on her scalp, face, neck, chest, and legs; bands on her chest and stomach; a transcutaneous pCO2/O2 monitor; and a pulse ox probe on her finger) it made for a very fitful night. She was especially agitated by the nasal cannula and CO2 thermistor and tried to pull it about a thousand times (slight exaggeration). The tech came in to put it back in about 20 times (no exaggeration) and I had to tell her to leave it alone more than 50 times (no exaggeration). In the morning, I asked the tech if they were able to get adequate information with all of her waking and removal of the cannula and she said they did, so that is good. If they got good info, one mostly sleepless night will be well-worth it! 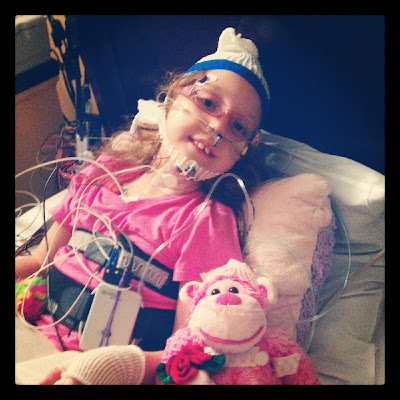 I could only glean limited information about how it went. I know that her transcutaneous CO2 was above 50 for all of the sleep time I observed (normal is below 45, but some docs don't treat until it is over 50 for a certain % of the night). I could tell she was about to wake up because it would go down to 44-45 right before she woke up and could tell when she was back to sleep because it was back to the 50s. During her last study, she was between 44-49 most of the night, but they were only measuring EtCO2 with the nasal cannula, so if she was blowing off CO2 from her mouth, it was not measured. The transcutaneous monitoring gives a more accurate picture, so I'm glad this lab uses it! The other data I have is her transcutaneous pO2 and it doesn't really mean much to me, because I can't find much information about the norms. Most of the night, her pO2 was between 40-70. The only information I could find about pO2 said it should be between 80-100, but that was where an ABG was concerned and not transcutaneous monitoring, so I don't know what to do with the information for sure. I couldn't see her oxygen saturations, so I don't know anything about those numbers yet. I won't know anything about central apneas until I hear from the pulmonologist, but I do know she stopped breathing once because she started kicking and I thought she was fussing and tried to calm her down and the tech told me she was still sleeping and to let her be. Later, she told me that she had stopped breathing and the kicking was an attempt to wake up/start breathing. Based on the limited information I have about her CO2 levels, I won't be totally surprised if we have to start some kind of night-time treatment for her after this (in which case, the little miss will have to adjust to having something in/around her nose at night). We'll see what Dr. J thinks of her study (hopefully soon!) and go from there.
Posted by Kyla at 12:16 PM

I am glad it was better than the last time. We have had three sleep studies they are always hard. Each time we have had the same tech, she has been great. The first night she help Matt so much of the night.
For Matt since he is so young and has so many sensory issues she waits for him to be asleep to put anything on him, even with that she spends a lot of time reapplying things.

We've never had the transcutaneous CO2 monitor (only the nasal thermistor) - very interesting. I wish our hospital did the transcutaneous, because Nolan mouth-breathes, too. I'm anxious for your results - the O2 sounds very low to me... but the equipment and readings might be different than the equipment used by our sleep center/children's hospital. I hope you get the results soon!

If she needs the nightly treatment, I think you will be surprised at how much difference it will make. I found it difficult to get used to having something over my nose and mouth when I tried my first CPAP mask, but with some switching and experimenting, they got me down to a nasal fitted mask only, even though I used to breathe through my mouth only. Once I had air shooting up through my nasal passages, I stopped mouth breathing, since it isn't the natural default. I find it infinitely more comfortable, though it makes me look like an air force pilot. I thought I wouldn't be able to get used to having something on my face while I slept, but I felt so much better upon waking once they started treatment, that it was worth it to push through those first few weeks of adjustment until sleeping with the mask became routine. I know she's still young and may have trouble with the motivated-by-potential-results part, but if you find a good medical supply place that will work with her needs, that will go a very long way towards helping her acclimate.