We are in the New York Times today!

Thursday afternoon after we got home from ice skating with some of our favorite folks (one of the fun summer things we've been up to lately), the doorbell rang. I said, "Who is it?" fully expecting it to be the neighbors saying our chickens had escaped again...or maybe a proselytizer of some sort. But the answer was, "Manny Fernandez. I'm a reporter with the New York Times looking for Kyla [Last Name]." I was shocked! Reporters from the New York Times do not show up on my doorstop every day out of the blue!

As you probably already know, the Supreme Court upheld the Affordable Care Act that day and it is a big news story. The reporter had been in our area because there is a high rate of uninsured here and he had seen an earlier article in the local paper about us and tracked me down. I spoke with him for a few minutes, but because it was just me and KayTar here, I couldn't do a whole lot of talking. I asked if he would email me his questions and I would respond that way and then we could touch base about anything else the following day and that is exactly what we did. Yesterday, the reporter and a photographer came back and we talked a bit more and got some photos.

I felt very comfortable with the interview and what I said, but I'm always nervous about how what I say might be edited and perhaps not stay true to what I intended to communicate, so I was anxious to see it this morning and woke up much too early to check on it. I *think* it came across really well. I definitely didn't read it and think "That's not what I meant!" Whew! It is online and in print today (page A11). KayTar is SO excited to have a picture of her kissing a sock monkey in the New York Times. When she heard the reporter and photographer were coming yesterday, she said, "I thought I was going to be a nobody, but I guess I'm going to be a SOMEBODY!" Haha! She cracks me up! She's ALWAYS been a somebody in my book!

Here are the links to the article and the audio blip from me. 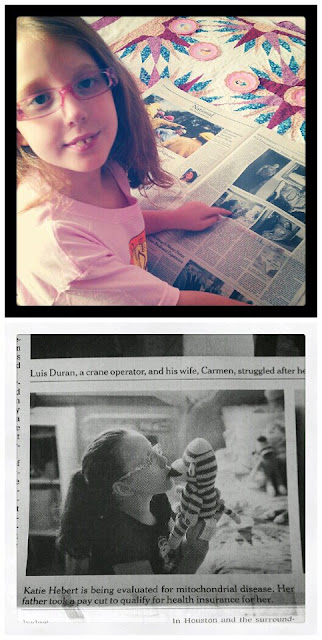 oh my gosh that is so cool! I hadn't read that article yet.

cool! thanks for sharing.

I DON'T WANT TO BE TAKEN WRONG

BUT I NOTICED YOU IN THE ARTICLES IN THE NEWSPAPERS.

THE NY TIMES IS NOT VERY SMART AND INFORMATIVE, JUST REPORTING ON SIGHTINGS.

SO HERE IS MY MESSAGE :

A. MEDICAID/CHIP IN TEXAS HAS A QUALIFICATION FOR CHILDREN OF PARENTS' WHOSE INSURANCE COSTS 10% OR MORE OF THE PARENTS' YEARLY INCOME.

THEREFORE, IF EVEN IF YOUR DAD MAKES $100,000, YOU KYLA STILL QUALIFY FOR A CADILLAC MEDICAL PLAN WITH TEXAS CHILDRENS HOSPITAL MEDICAID NETWORK IF YOUR MEDICAL BILLS AND INSURANCE IS MORE THAN $10,000 WHICH IS USUALLY THE COST ( IF YOU GET QUOTES FOR A STANDARD POLICY WITH A LOW OR HIGH DEDUCTIBLE ).

B. THEREFORE YOUR DAD DOES NOT HAVE TO SEEK SALARY CUTS TO QUALIFY YOU FOR MEDICAID.

C. SOMEONE AT MEDICAID STAR HAS NOT DONE THEIR HOMEWORK.

D. YOU HAVE TO CALL STAR OF TEXAS OR MEDICAID AT THE STATE LEVEL AND TELL THEM TO KEEP TURNING THE PAGES IN THE QUALIFICATION SECTION UNTIL THEY FIND THAT 10% RULE.

F. YOU SHOULD CONSULT MEDICAID TO SEE IF THEY STILL OFFER THIS, I DID IT BACK IN 2008.

I HOPE THIS HELPS AND I HOPE YOUR DAD GETS HIS SALARY BACK.

Googleheim: No one I have spoken to (and there have been a lot of people over the years) has mentioned or known about this, but I will check into it for sure! That would be pretty amazing!

I really do hope that this helps.

I was in desparate need due to being self employed, and I basically have forgotten how I got to that last ... qualification.

However, I did have to ask them to keep going through the list until the very ... last qualification.

We had private insurance and we actually kept it continuous up until the day of the activation of the Medicaid / Chip.

You will qualify regardless if you present a copy of quotes from 3 insurance companies.

Here is a recipe :

1. Call texas Star Medicaid and ask to make sure it is still there, and tell them to mail and or fax the sign up papers to you.

2. Have Dad use his adjusted gross income after standard deductions and maybe even after medical expenses - if it is not explicately asked for the gross income ( total yearly salary without deductions yet ).

3. Use current insurance costs as an example against the salary and show it is more than 10% - do the math "out loud" and print it on yoru cover letter.

5. DO the math again - show that the cost of the yearly insurance costs are more than 10%.

6. Cover letter - your address top right, their's following on left - typical form letter. Explain that your insurance is too expensive, you want to use the 10% rule, tell them enclosed are the quotes, your Dad's 1040 tax form, and make sure they remember you are not disqualified under the 10% rule even though you had or HAVE private insurance.

Now, if your Dad makes a lot of money, but no where enough to manage this insurance and bills and somehow that is a disqualfier, then I would use the adjusted income.

Next, another way your Dad can lower his adjusted income is to put money into the retirement funds - this is better than asking for an anti-raise :

If you compare against a co-pay plan, the exposure for co-pay is up to $20,000 to get the point where medical bills are 100% paid for.

AND with an HSA you can open an HSA bank account and pay the bills with pre-tax money. Plus you can keep up to $6150 per year in the HSA which acts like an IRA or 401K - Dad can save in retirement while lowering his adjusted yearly income since the HSA, IRA, and 401K contributions can be pre-tax qualifiers which reduce the final adjusted income.

He then would be a contractor from his "company" ( 1 member or single employee ) to his current employer.

I hope it is the easy way for you - just doing the current math of 10% of salary against current insurance costs without having to look at retirement stuff.

I am not an expert, and all the rules may change since I looked at it. Maybe the retirement stuff doesn't work also since they might look at gross income.

Just find out with the experts out there, and remember to call Star Texas medicaid whoever several times and talk to different folks until you reach someone willing to talk to you if the first ones don't care.