Yikes! It has been a while since I've written anything. Life has been pretty calm (and maybe even a little boring at times) so that might have something to do with it. Time to play catch up...again!

BubTar did, in fact, improve rapidly after he started antibiotics. He's been back to normal for quite a while now. Yay! KayTar never caught whatever he had, double yay!

KayTar had her follow-up with her neurologist at the Headache Clinic on the 21st and the doctor was very pleased with how she was doing, so we don't have to go back for a year! She said she wouldn't usually let someone go that long between visits, but she knows that I'm the type of parent who will make sure to contact her if there are any major changes in the meantime.

We got KayTar's liver labs back and they are still slightly off. Her AST was 43 (37 is the upper limit of normal) and her ALT was 66 (with an upper limit of 55). I thought they had been elevated at every check for a year, but I looked back through the blog and it has been TWO years. Time flies. Her GI nurse was out last week, so I haven't touched base with her about it yet. After 2 years of elevations, I don't know if they will want to investigate it further or just continue keeping an eye on it.

Today was KayTar's pulmonology follow up with Dr. J. I really, really like Dr. J, she is kind and thorough and I appreciate that! KayTar's imaging studies and labs from last visit all came back normal, but the mycoplasma panel was forgotten somehow. We had labs drawn for that today as well as labs for iron, BUN, creatinine, TSH, folate, B12, lactate, and pyruvate. Most of the labs are to investigate KayTar's new weird symptoms that started a few weeks back...she woke up complaining that her legs had been trembling and it woke her up. She vomited, along with it the first few times. I felt her legs trembling one of the times and it was like when you have a high fever and get the shakes from it, but only in her legs. Nobody has been very helpful with this particular symptom...the pediatrician wanted to order an EEG, but it still hasn't been ordered, and the neurologist just kind of said, "Huh." So I was glad that Dr. J is looking into it a bit deeper. I am wondering if it might be anxiety-related, but Dr. J seems to think that if it was anxiety, it probably wouldn't be starting during sleep and waking her, it would be happening more when she was already awake. So we'll see what these labs say and she will also be having a repeated sleep study (in Dr. J's lab this time) to see what we see.

The insurance has denied the request for KayTar's nuclear mitome testing, so we are starting the appeals process. The reason they listed truly cracked me up, "Additionally, after history, physical examination, pedigree analysis, genetic counseling, and completion of conventional diagnostic studies, a definitive diagnosis remains uncertain." No sh!t, Sherlock! Why do they think we want to run a highly specialized genetic study on her? Because all other avenues have failed to provide A DEFINITIVE DIAGNOSIS. Geniuses!

School is almost out! We are in the last week...can't wait for summer vacation to start! :) Hopefully, I will be a better blogger over the summer. 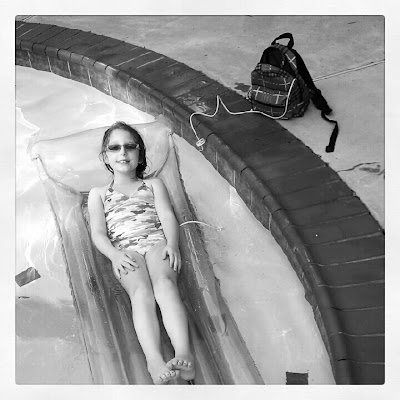 Good luck with the bazillions of tests coming up - we have a busy June/July here, too.

Glad to hear that you've been experiencing relative calm! And very glad to hear about BubTar's rapid improvement, too.

Insurance companies and their nonsense make my head explode. Argh. Good luck to you with the appeal.

Glad things have been calm. I hope that her liver labs go back down, two years of being high is scary.

I got an e-mail from Beads of Courage today, I have questions though, if I see you on facebook I will ask you there. I also e-mailed them but it took them a long time to get back to my first e-mail.

That last picture of KayTar cracked me up...multi-tasking at its finest! :)

Hope you guys have a great summer. I have felt sorry for you, going to school into June. But I know I will be jealous when we start back mid-August!