Oy vey! KayTar had quite a strange day today! I think she made at least 4 trips to the nurse and it seemed like the nurse and I were communicating via email nearly all day.

Let's go back to last night and start there. KayTar tolerated a Pedialyte feed yesterday afternoon, and a half and half (Pediasure/Pedialyte mix, not the kind you put in coffee) feed before bed. She didn't vomit anymore, even after the Zofran wore off. This morning, I gave her another half and half feed because it is gentler on her system and she is more likely to tolerate it well. The downside is that it doesn't hold her over as long. I sent some baby food veggies in her lunchbox labeled "Breakfast", and emailed the teacher to let her know KayTar needed to eat those at breakfast to give her glucose a bit of a boost mid-morning, because it is one of the only remaining carbohydrates in her diet.

KayTar did eat about half of the jar, but I guess it wasn't sufficient. During PE, she freaked out a little, saying she was very hungry. She only does this when her glucose dips and she starts to feel it...it is like mild panic, not typical hunger. She went to the nurse and ate a couple bites of the tuna from her lunch and felt better. The nurse didn't check her glucose at this time. Next, she went to music and complained once again. It is important to note that KayTar HATES eating and LOVES school, especially her extras, so this wasn't a ploy to miss class. Because it had only been 30 minutes and it was pretty close to KayTar's standard glucose check and pump feeding, the nurse decided to let her finish music and then check her out after. It was earlier than her regularly scheduled glucose check and KayTar's glucose was 63, which is a little low, but not in the worrisome range quite yet. She got her tube feed immediately and all was well.

Later in the afternoon, she started to complain of being exhausted and was very insistent that she needed to lay down, so she went baaaack to the nurse. The nurse checked her glucose with a different meter that was handy and her glucose was 83, which is firmly in the normal zone. There is some variation from one meter to another, but I doubt it was a 20 point or more difference in readings, so I'm guessing that she was probably somewhere in her safe range, if not exactly in the 80s. KayTar said she thought she was going to vomit, but thankfully she didn't. She laid down for a bit and went back to class when she felt a little better. I picked the kids up via the front office today instead of the line because I didn't want her out in the heat and the sun after a day like this. When we got home, I checked her glucose and it was back down to 57 (her third verified low number in less than a week). I gave her 4 ounces of Pediasure, rechecked her glucose and it was 106, then gave her another 4 ounces shortly after...her glucose was 86 not too long after that, still a good number, and she kept all of her Pediasure down. Success!

I'm not sure WHAT was going on today. I have a suspicion that it is glucose related, but most of her readings today were not in the danger zone. I think that her levels might have been jumping/dipping more than usual, causing some unpleasant side effects. Perhaps she is at a deficit from the lack of regular feeds yesterday? I honestly don't know. I think that the extra energy she expends at school is coming into play, too, but I'm not sure what we need to do about it. We'll see how tonight and tomorrow go, though. I hope we find a solution and get her crazy little system back to equilibrium soon! 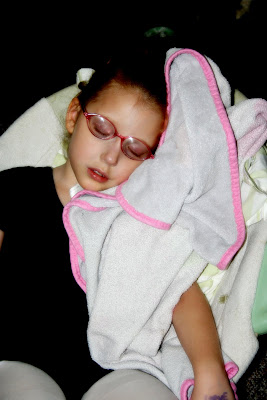 Could it be a growth spurt?