Sleepover in the Hospital

KayTar had her follow-up endocrine appointment on Friday. It was a bit surprising. The attending said it was time to go ahead with the inpatient fast. Then the fellow said, "How is next week for you?" which is REALLY surprising, as I don't think we've ever had any appointment, inpatient or outpatient, be scheduled within a week. I was expecting it to be scheduled for summer or maybe in early 2011! Nope, it will be Thursday and Friday of this week. Hopefully it will only be Thursday and Friday, but they'll keep her as long as it takes to get her glucose to bottom out. I don't predict that it will take long, but there is a chance it will because her energy expenditure in a hospital room will be considerably less than a normal day at school having music, PE, recess, ect.

In case you are wondering, this is what a controlled fast consists of:

*We will call the hospital on Thursday morning to find out when they will have our room ready.
*She will get all her normal feeds on Thursday, but following her bedtime feed, she won't receive anymore nutrition until her glucose bottoms out.
*She will be monitored and have glucose checks every 1-2 hours.
*Once her glucose is below 50 (I think...there is a chance they said 40, but I can't remember precisely), they will draw critical labs, which sometimes test positive for things that are negative under normal circumstances.

Sounds super fun, right? Starving your kid for a couple of days? Gah. However, this is one of the only times it works in our advantage that KayTar doesn't really get hungry like other kids...initially she will be okay with it, I think. Problems will arise when her glucose starts to drop and she starts to feel it and panic. I'm not looking forward to that AT ALL. I'm also a teeny bit worried it might trigger an episode and I don't want to ruin her record!

When she has labs done or testing that is unpleasant, we always let her choose a reward. Her request for this hospital sleepover was a LaLaLoopsy doll, preferably Jewel Sparkle.Yesterday I went to FIVE stores and none of them had Jewel Sparkle or her second choice Crumbs Sugarcookie. My mom and dad had gone to the country for the day, so I asked them to check the stores they passed, after 3 stores, they found Crumbs Sugarcookie, so they bought it for her. KayTar was so happy! She said, "Well, I'm all ready for the hospital now!" Mission accomplished. Now, if only I felt as ready as she does! 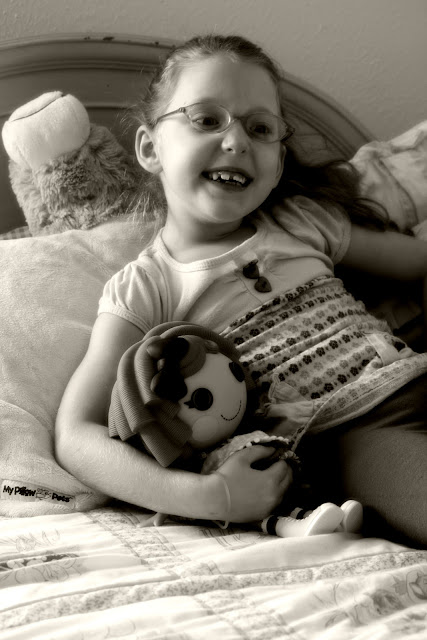 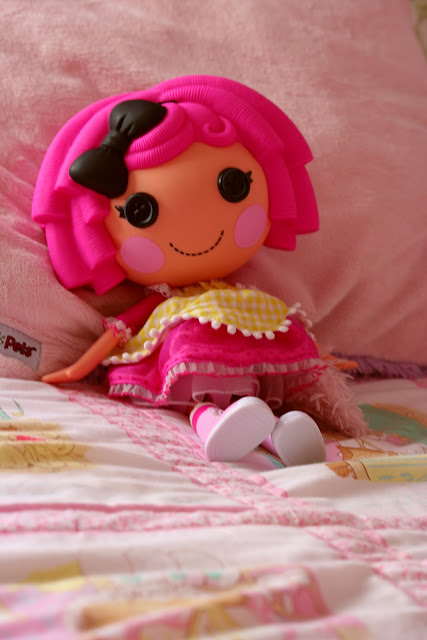 That doll is SO CUTE!!
I am still sad you had to do this but i hope it yields some answers.

I don't envy KayTar this week...or you for that matter. I'll be praying that it goes really, really well!

That sounds a little scary, but as always, I hope for some answers for you guys.

that doll is adorable. I just so wish your kiddo never had to spend any time in a hospital

Her new doll is a sweetie. I'm sorry YOUR sweetie has to go through this, but hopefully you'll get some good answers.

I came here to try to understand what was going to take place at her fast and why they were going to do it. I'm so glad you have this blog. hope they find some answers. I'll be praying for you and Kaytar.

oh how sweet! i hope all goes well and this test isn't too difficult for her.

That doll is almost as cute as Kaytar! I'll be thinking of you guys, hoping for the best. You're all such troopers.

And the blog looks FANTASTIC! (I've got to quit reading posts in reader!)