Every day, on the way home from school, I ask the kids about their day and also ask if anyone got in trouble. If they get in trouble at school, then they have consequences at home. A conduct mark is just a line on a sheet of paper, unless there is something to back it up. Usually, they lose one privilege per conduct mark...like computer time, TV time, and so on. On Wednesday, KayTar said, "I got a conduct mark!" I asked her why and she said "I was talking to the teacher at story time without permission." This is plausible as she struggles a lot with raising her hand before speaking...this is actually in her IEP goals for the year. She went on to say, "The teacher said that the next step is calling your mom or whichever parent freaks you out the most." I said, "Well, KayTar...because you didn't obey the rules at school today, you won't get any computer time." She gave the obligatory "Aww, man." and that was the end of it.

Yesterday, I visited her classroom and I casually made mention of the conduct mark to her teacher, who said, "What?! KayTar didn't get any conduct marks!" Evidently, during story time another little girl was interrupting and the teacher took that opportunity to explain acceptable behavior to the class, as well as what the consequences WOULD BE if they did this. It was all hypothetical! Except, KayTar is crazy literal and didn't grasp the fact that it was hypothetical. She thought she was getting a conduct mark, which she then reported to me as fact, which I took at face value and handed out a consequence...for NOTHING. Whoops! I guess that means she has 1 discipline credit stored up for if/when she does make her first infraction at school! 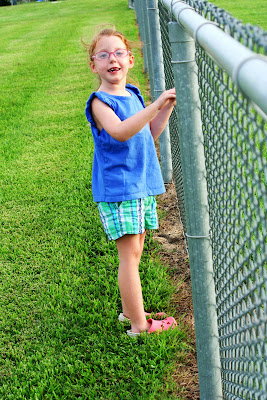 i can't tell you how many times i have said about my child "she is not a reliable witness". (eye roll)

Kaytar is such a good kid. Seriously. You did (are doing) such a great job!

I get such a kick out of this story (minus the whole punishment thing of course). I have to wonder about the "whatever parent freaks you out the most" part. Did KayTar come up with that herself? Silly girl! :)

This reminds me of when C got overwhelmed with life last spring during the separation and managed to shirk her accelerated reading class for three weeks without her teachers knowing. Sad thing was, she had no idea it was wrong- she was just too tired to go and found her own solution. Kids approach life in such funny ways sometimes.

Well, at least she took her lumps well, even if they weren't lumps that were actually due her.

I like your post title. For me, the research is still being conducted as to the reliability of testimony from four-year-olds.