The rest of our week will be fairly busy. As I mentioned, tomorrow morning we revisit genetics. I'm less than enthusiastic about this, because we feel a bit like they've dropped the ball on us. And also because KayTar acts like a spidermonkey on crack during these endlessly long visits. The pediatrician is going to call them to "refresh their memories" before our appointment, so I hope it will be more productive.

Then tomorrow afternoon we have a gastro appointment with a doctor we were displeased with the previous time. I had planned on switching from his service and consolidate both her feeding disorder and GI needs to the feeding disorders doctor, but I forgot about the appointment altogether until this week. I hadn't even written it down on the calendars! When I saw genetics on the calendar, something wiggled in the back of my brain and only then did I remember the double appointment day. The wait to get a rescheduled appointment with our feeding doctor is 3 months, so we will keep tomorrow's appointment with this doctor and then make the switch in time for our next follow up. Double appointments means we will be at the hospital from our first appointment at 10AM, until our last appointments end. It begins at 3:15, so I don't expect to be home much before 6PM with the rush hour traffic we will encounter on our way home.

Then Friday we have neurology bright and early. The appointment is at 9:15, which means I'll need to leave around 7:45. Morning traffic is killer and doubles our normal 45 minutes jaunt to the hospital. So this is me saying I probably will not be around much seeing as today is the Fourth, then the next two days are rather full. I'm sure I'll be back with an update of the medical persuasion Friday afternoon.

But I leave you with a few photos... 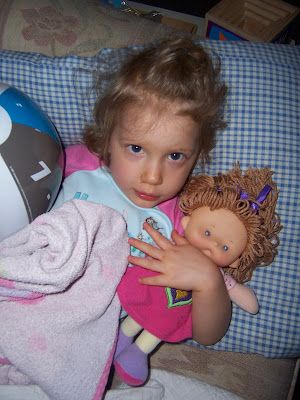 KayTar and Dolly. We cut through the doll aisle while shopping, and KayTar really wanted a doll. She chose Dolly out of the cheapie doll box herself. She picked up several different dolls, hugged them to her shoulder and handed them back, dissatisfied, until she hugged Dolly. She had made her choice. They are fast friends, and Dolly is almost as important as Gee (her blankey) these days. 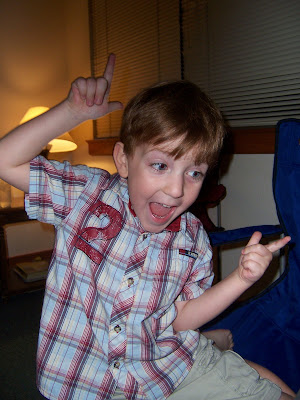 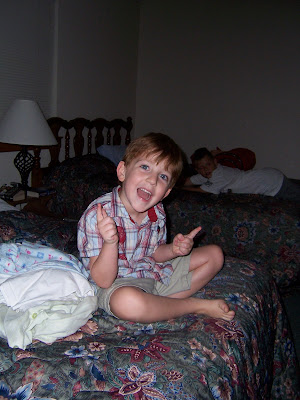 I can't keep BubTar from using the fingers in every photo I take. The second shot, I took with a double flash. His hands were down nicely when I pushed the button...but he had drawn the fingers by the time the second time it flashed. He is quick on the draw. 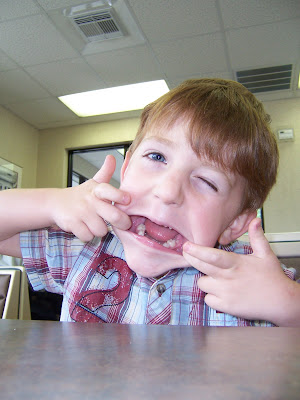 Oh right, I forgot. He makes this face, too. 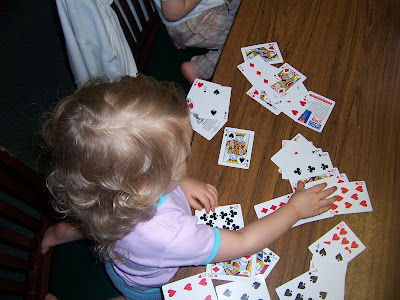 KayTar learned to play cards this weekend. Well, she learned to identify cards. You can say "Where is the 4 of spades?" for example, and she will fish it out for you. 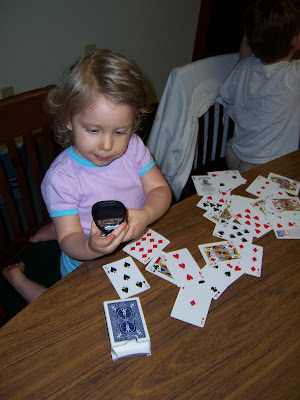 She thought she would monopolize on her newfound skillz, and has started an illegal gambling ring. She is calling her contacts in this photo. 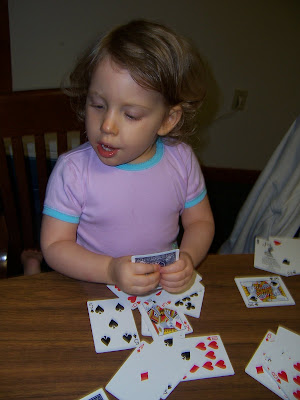 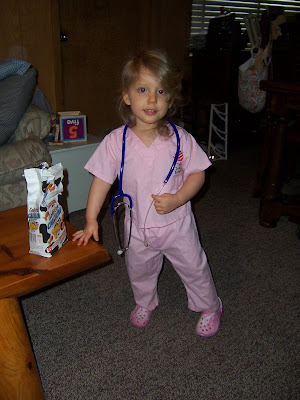 But she abandoned her life of crime in favor of a career in medicine.

Have a happy Fourth, everyone. Be back Friday.
Posted by Kyla at 10:51 AM

Wonderful pictures, as always. They are both adorable.

Good luck in the next few days, 'kay?

Those are all great pictures. I can't believe KayTar's memory!

I do not envy the day you have ahead of you tomorrow but I'm looking forward to answers with you.

Sounds like you've got a plateful. Lucky for you, your kids are so damned cute! Spidermonkeyness and fingerpointing included.

Happy 4th of July! And I can't tell you how relieved I am that KayTar gave up her criminal life for the straight and narrow (phew!).

I hope your appointments go smoothly, traffic is non-existent, and spidermonkey does not show herself.

Those photos are fantastic - Bub is the king of the quickdraw and Kay just is so divine. I love that she had to hug test all the dolls until she found just the right one to love.

Good luck, and I hope things go as well as possible.
Your kids are very, very cute, which I don't think anyone has mentioned yet.

I just noticed you changed your header. I LOVE it. That is perfect for you blog...much better than "Baby Sister, Age 1" How outdated ;)

What a cute doctor KayTar makes! Keep encouraging that choice in profession so you can live in a very nice retirement community when your like 42 and she's all grown!

Can I just say, that last photo of Miss KayTar seems to be a look into the future doesn't it? Won't shock me at all...good luck today and tomorrow!

All I can think is that, with her history, she would make an excellent physician. Imagine having a caregiver who KNEW, really KNEW...

I may have to steal your kids for a bit. KayTar and I have fortune to make in Vegas. BubTar can come along as our entertainment. :)

I'm thinking about you today. (HUGS)

The dancing Bub and the cuddly Kay photos are ADORABLE.

I can picture that doll selection. Can I ever. So sweet.

I hope all goes well for you. I'll be thinking of you.

Hey, at least she'll have gambling as a fall back in order to pay off her student loans. Med school, aiiiye karumba, that's pricey.