This post was supposed to be different. I sat down last night to do a lighthearted, photo-heavy post. I uploaded the first photo and heard KayTar scream. Josh and I both went in to check on her and she was screaming and grabbing her eyes. Josh scooped her up and I stroked her head. At first we just thought maybe her eyes had been moving and she was upset about it, but she continued to scream. And then they moved. And then they moved again. And again. And she was still screaming and clawing her eyes. It was clear that something was happening. Episode. We turned off all the lights and put her in her chair. Josh went to put BubTar to bed and I sat with KayTar. We gave her a suppository. She was vomiting and the pain was coming in intense waves. She could quiet herself for a few moments before another wave would rip through her. It was definitely originating in or behind the eyes, because she kept grabbing them. No head tilt. I don't know what her eyes were doing, because we were in a darkened room and couldn't see them. Josh and I laid on the living room floor next to her chair in the dark while she was quiet, not daring to move or make a sound. It lasted for about 2 hours, and then we moved her into her bed where she slept through the night. She's actually sleeping while I write this.

17 days. They're moving closer again. We had that break, but it seems to be over. I'm going to BlogHer in 10 days and will be gone for 3 days. It is going to kill me if she has one while I am away...to not be with her while she's going through something like that would just be unbearable. Yesterday we had the most run of the mill day, I can't think of a single trigger. She ate well, slept well, her schedule was normal. I don't think she left the house all day, so no car trips either. She was just playing in her bedroom with BubTar when it started.

Last night, when I took my turn to tuck BubTar in, he told me an "Adventure Story". These are stories we take turns making up for each other at bedtime. This was his story:

"One day BubTar and Mommy were walking in the woods. Daddy was exploring a spooky castle. KayTar wasn't there, because she was too sick. Daddy got trapped by the evil villian in the spooky castle and then he got you, too. I had to ride my boogie board across the Lake of Pools (this is a lot of swimming pools put together to make a lake) and save you all. So I did. And then we went home. Oh, and KayTar WAS there. She threw up everywhere on the way home. She threw up on every trail where there was not grass, so every time the evil villian tried to follow us, he slipped and fell in it. The End."

Nice to know that episodes are now making their way into our make-believe story land. And evidently, they are also a handy super power. Truly, it was a bit like a stab in the heart when KayTar was sidelined from the story due to illness...I mean, can't she even escape from it in the pretend realm? But then when he brought her back and she ended up saving the day through her, ahem, special ability, it was very entertaining. I thought it was quite clever of BubTar to find a way to include her all on his own, in spite of her illness. 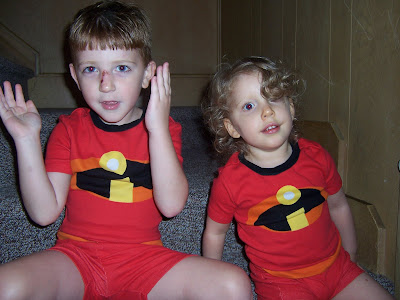 The Boogie Boarder and the Puking Princess (or Vomit Vixen? Gagging Girl?)

ETA: She's having another today. Right now she's quiet (for a moment) so I snuck on to update. Two days in a row. Damn. This is too much.

ETA (again): I think it is over. It started about 11:15 this morning and she seemed to come out of it about 1pm. She is in her crib resting right now...I hope she stays better. At least it wasn't 8 hours long.

ETA (again, again): Something isn't right. She still isn't back at baseline. I picked her up a little while ago and she went totally limp and wouldn't respond or move at all for 1-2 minutes (which seemed like eternity). She is still having problems with her eyes. But she isn't in pain (thankfully), she just isn't herself yet. If she isn't back to normal by the time Josh gets home (in about 30-45 minutes) then the neuro and pediatrician think it is a good idea to bring her in. They can give her fluids and the neurologist said they might need to give her medication to help her come out of it. I'll keep you posted as best I can.
Posted by Kyla at 8:41 AM

The Big E - it tears me up because it has returned. I want to hop on an airplane and come help you out but all I can do it send ((((hugs)))). At least I get to give you a real one in little over a week.

BubTar amazes me. He loves his sister so much that it makes me proud, so I can only imagine how it makes you feel. While I wish she didn't have to have such a strange super power, at least it keeps the bad guys at bay.

Darn it. Why won't she follow a pattern? To not know what might have triggered it any of these times now...UGH! If it wasn't stress of travel...car rides...hmmmm

I think BubTar is so sweet and I love them in their matching Incredibles jammies. They are certainly both incredible kids.

Way to go BubTar - making lemonade out of lemons! He's one cool kid. I'm really sorry to hear that the the Big E has returned. Here's hoping her super-power will pull her through the unfun times. She sounds pretty super to me.

Oh, man, Kyla. I'm so sorry. These episodes must be terrifying for you -- and clearly are for her.

BTW, my Aliya loves the incredibles pjs. We are now the 'complete' Incredibles family. John John has upgraded to Dash and Joshua is now Jak-Jak. LOL. Oh and apparently I have Elastagirl arms, haha

oh how hard that must be! that poor little thing. you described it so well. i can't imagine the pain you and your husband go through whenever this happens to her.

and that bubtar--he is an awesome brother. what a sweetie. and i personally like vomit vixen!

Those siblings are great aren't they? =)

((hugs)), here's hoping the doctors can find the right combo of things to give Kaytar relief!

I can't stand it that she is in pain or suffering.

I'd paint my kids and bring them over in person if that would help.

Wow, BubTar is more generous in his made-up stories about his little sister than Patience is. Sometimes Persistence is locked in a trunk or somewhere else.

(But I get how being sidelined by illness was a tough nut to hear.)

This makes me feel sick inside. How amazing BubTar is to recognize what's going on and yet find a way for his sister to save the day!

What I woudln't give to keep KayTar from these terrible episodes. I know you & Josh must feel that times infinity.

Hope she gets lots of good rest today.

BubTar is the best big brother (with the funniest imagination)!

Vomit Vixen...definitely... BubTar is obviously a loving big brother to make this a special superpower...

But I'm so incredibly sorry to hear that the episodes are picking up again. Poor KayTar!

And poor mom. Hang in there.

I am so sorry the episodes are back, and it seems like they're back with such a vengeance.

I'm hoping that the Vomit Vixen gets to shed that title reallly soon, forever. Even if that is the best story I've ever heard.

Oh goodness how terribly frightening. I'm thinking of you and kaytar.

I'm so sorry. Give Katie hugs and kisses.

This doesn't even sound like BPT to me anymore.

Going in sounds good. This just doesn't sound right. If there is a right in this crazy crap episode world.

I just want to hug her and squueze these little episodes right out of her, poor thing.