The fear that does not consume

Speaking of the fear, KayTar has thrown us for a new loop. Aren't you so very excited?? No? Okay, I'm glad we agree on that. Yesterday evening while changing KayTar's diaper, I saw her eyes spontaneously jerk over to the far left. I didn't even know if I really saw it. It happened so quickly.

And it happened again. And again. I called Josh to come watch, but by the time he got there, it had stopped happening. We went to his parents' for dinner last night. We were standing in the kitchen and KayTar was crawling through, she stopped to look up at me and her eyes jerked again.

But the moment had passed. We had a nice evening, and KayTar finally peed (did I forget to mention we were skating a dehydration line yesterday? Oops. She didn't pee from 8pm Sunday night to 2pm Monday afternoon. We're good now, though. I think.) While we were changing her diaper, Josh finally saw it. Then it happened again. And again. After seeing it so many times, we could roughly explain what was happening. It was a sudden jerking to the far left. Nothing else strange was happening. She was very still for the instant it was happening, but besides the eyes, no other strangeness. We saw it again after bath while we were dressing her. It probably happened 15-20 times that we saw throughout the evening yesterday. But I think it happened much more than that, because it is only noticeable when we are looking her straight in the face and she is gazing back in our direction.

This morning the pediatrician called to give me information about the EEG tomorrow and ask if it was still happening. I told her no, because at that point, I hadn't seen any...but since then we have seen it happen several more times. She is still not eating well, and she immediately threw up what we tried to feed her this evening. I don't know if that is related. Otherwise, she is completely herself.

Tomorrow we have an EEG. Tonight we have to keep KayTar up until midnight and wake her at 5 in the morning. The girl likes her sleep, so I don't think she'll be too keen on this. I KNOW I'm not keen on it. Starbucks people. Starbucks. We want answers this time. Big fat answers. I'll settle for a few good clues...but an ANSWER or something definitive would be ideal. So if you have extra good thoughts...or prayers...or anything you'd like to send off for us, we would be so appreciative. 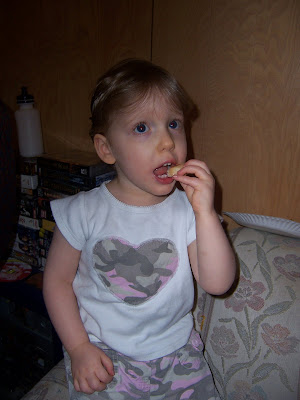 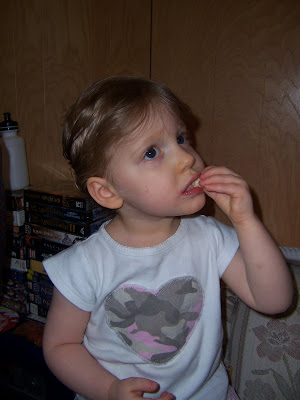 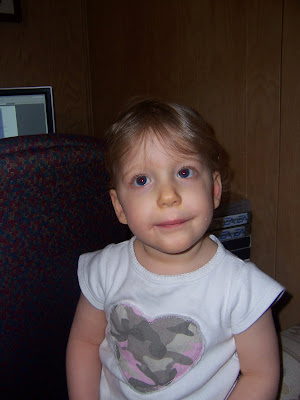 I'll be keeping her in my prayers, of course. Here's hoping for some good answers soon.

Oh, Kyla, I'm so sorry. This must be so scary for you guys. I know the EEG will be rough tomorrow, so I'm wishing you the best, and I will be thinking of you tomorrow morning.

Thanks for posting more pics! She is so sweet (and I love the shirt).

I hope tomorrow goes well...and that something is evident on the EEG. Did her doctor think the eye twitching might be petit seizures?

I'll be thinking good thoughts towards you and your family as well; of course, when I see the pics of her I just think "awwww she's so adorable..." Good luck, and I really hope you get some sort of answers.

Good luck, wee KayTar. Take care of that Mom of yours as well.

Oh, I hope you get the answers you want and need. I am sending all the good mojo I can muster your way, and keeping you in my thoughts. Good, positive thoughts.

The nystagmus sounds exactly like what I saw JF do recently (only once so far), but I had chalked it up to his recently-diagnosed epilepsy. I will definitely ask about it.