The short and sweet summary of the day:
She is not having seizures! The EEG came back normal. WOOT!

The longer version:
She stayed up last night like a champ! She was laughing and playing up to the moment we tucked her in at midnight. This morning was less joyous, because I am a royal grump that early in the morning and she is, too. We held each other and whined on the couch for a while about how unfair life is, but eventually we got moving. She was a sweetie in the car...no crying, no unauthorized sleeping...just sweet baby girl babbling. We got there and were called in a timely fashion. She sobbed and signed "Help" as I held her down to get her all hooked-up. It was very sad. But then she snuggled up and went to sleep as per the instructions. Ten minutes later and I had to wake her up, and she even took that sportingly. All in all it was really easy. And the pediatrician called us around 5 this evening with the results. Totally normal. They didn't even see the diffuse slowing this time that they saw in August. So, no seizures...or they would have seen some sort of change in her baseline. Whew.

The eye jerking is likely nystagmus, and I don't know why it has started all of a sudden or what it means for KayTar. It is still happening, though.

The eating/drinking situation is still borderline. She was dry from midnight last night until 1:30 this afternoon. Her intake is less than spectacular, despite my best efforts to coerce her into drinking.

Here are a few photos from the PAR-TAY last night... 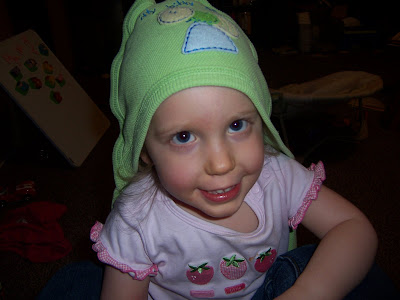 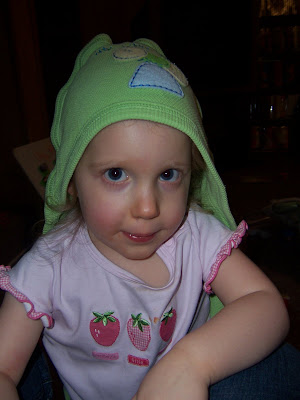 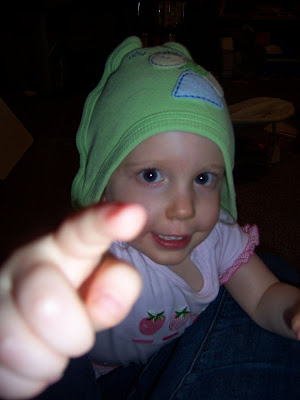 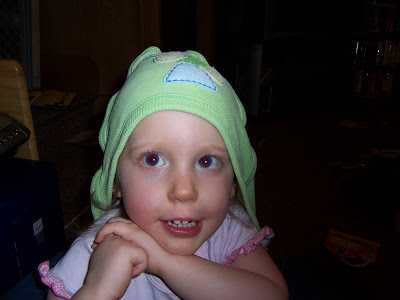 What a champ to stay up like that, I would have had a battle or meltdown on my hands. She is a brave little lady and darn cute.

Phew. But still the uncertainty...

I'm glad that KayTar rose to the challenge.

Yay! How sadly cute is it that she signed "help?"

Congrats! Stop with the adorableness.

Congratulations on the EEG...and also, those photos are *ADORABLE*!

woohoo. what a journey. and what a family, for moving through it with the grace you do.

What a cutie!!! And what a brave little girl. Any ideas about the vomiting "events"?

Yaaaaaaaay no seizures! What a sweet pea she is to be awake and good so late! I hated that EEG prep. So did Bugga. My heart would have leapt straight outta my chest at her signing 'help'. Gah!

Congratulations on the good news! What a cutie pie.

On a momma note--she has the cutest clothes. I love that strawberry shirt (or pj top?)! Looks like spring!!!

I am thrilled to hear about the good news. The answers are really staring to come!

I, too, have been talking about nystagmus all week. Believe it or not, it is part of my job. Nystagmus is a sign of alcohol consumption. I have a 10 second video of what it looks like. If you would like I could e-mail it to you. Nystagmus is difficult to describe, but once you see it you really understand.

As always, the pictures are great. She is so beautiful and it looked like she was partying like a rock star on her big late night.

Kyla, that's wonderful! You know what suddenly occured to me? When my youngest brother was 9, he suddenly became very, very sick - he'd throw up until he passed out and it was very serious. It turned out that he had massive food allergies, which while not IDEAL was certainly better than a lot of other options. Could that be the sort of thing that's happening with Kaytar?

Elias has nystagmus so if you have any questions feel free to email me anytime. I've learned a fair amount over the past two years though I still have a ways to go...an endless process of learning this whole parenthood thing

I thought I should add that I was NOT suggesting that KayTay had been consuming alcohol! I prosecute DUI cases and it is one of the clues we tell juries about.

Yay! I do hope the MRI coming up gives you all some answers.