I've come at this post a few different ways, and I can't find a shtick that works for it. So, I'm just going to use the tried and true method: outright whining. Sound good? Good.

I'm still waiting on the MRI results. The MRI was over a week ago. The hospital told me to expect results on Tuesday at the latest. *sigh* No such luck. The pediatrician did email me (because she is wonderful) to let me know that the interpretation was extremely detailed and she is waiting on the neurologist to read over it in full and discuss it with her before she says much. She did, however, say the lesions from last time look stable, but she is reluctant to say much else just yet. That in itself is wonderful. No growth is very, very good. I heaved a great sigh of relief when I heard that. I just wonder what is in the details. I was hoping that the MRI's would be exactly the same this time around...and if that were the case, I don't think there would be so much to review. Can't they just stamp "No Change" on the thing and send it along? *lol* In October, our MRI was on the 20th, and we knew the results by the 23rd. A three day turn around is nice! But this? Its given me a bit too much time to wonder what exactly is going on. I'm not panicked or terrified, just antsy. I think they are doing their best to be thorough and really look for answers this go-round and that could be why it is taking a bit longer. I hope. Waiting isn't my strong suit if you hadn't figured that out by now.

On the flip side, we are waiting on an episode and I hope it never shows! I wasn't going to mention this, due to the jinxing but I've decided to throw down the gauntlet. If an episode is going to show because of a little jinxy-poo, let it be so...or not...I really hope NOT. Today is day 22. This is the second longest we've gone without an episode since they started in July. The longest was 32 days, and was at the peak of Periactin dosing. She isn't on any preventative meds at the moment. Because we like to make up assinine theories around here, I'll share mine. She was due for one on the day of her MRI...so when they knocked her out it rebooted her internal clock and bought us two additional weeks. *lol* Josh says that he hasn't had a headache for the same about of time. He said there was even a day he would have put money on getting a headache, but it never happened. I think its weird he can sense a headache is probably before it ever starts. His theory is that by the next time he has a headache, she will be having an episode around the same time. Those two certainly keep me on my toes. Either way, I'll keep you posted. Whether she does eventually get around to having one or not, the reprieve has been glorious. I hope it continues. :) 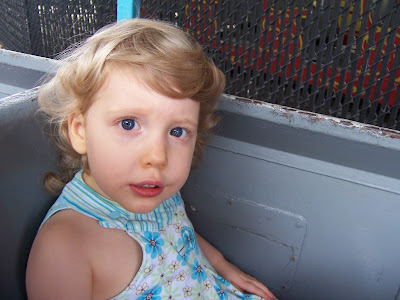 I thought of you a lot this week because there is a father of another child at Mme L's daycare who also gets migraines and he and I seem to have migraines always on the same day. I have always put it down to something to do with the weather, and then I worried that maybe KayTar was having an episode...then I realised that you're a long way away from me, likely with very different weather.

It must be so hard to wait for the results. But my guess is that, even if nothing has changed, they are looking at the MRI much more closely, to see whether they missed anything with a cursory look the last time.

Thank you for everything you said over my way, by the way. You are wonderful, and I'm so glad to have made your acquaintance, in whatever way this medium allows us to.

That FACE!
I'll keep her in my prayers, of course, and I hope that she is episode free for a long, long time.

All of this is great news. Of course, the waiting is difficult, but she looks like she is doing so well. What a beauty!

Ugh...waiting is the worst. You sound like you're handling it well. I just wish they could figure out what's up with your sweet little girl. And I don't want to jinx her "streak" but YAY!

UGH on the waiting! I finally starting burning up the phone lines a week after Bugga's MRI, I couldn't wait any longer. Please try not to stress too much while you wait. Which is like telling you to take Pez candy for your migraine. I'm waiting anxiously with you, from up here......

I am thinking of you...
and that face?
That face can melt a hundred hearts...
Thinking of you and anxiously awaiting the MIR results...

Such a little beauty cutie.

I hope the episode-free days have continued and...have you got results yet?

Man, I gotta read up. I am not current on what's going on. So the MRI results mean what? Sorry... I'll read more.
Great picts!