Last month, KayTar had a really strange day. It was a Saturday and we were just hanging out at home, having a relaxing kind of day, and KayTar kept saying, "Am I dreaming? Is this a dream??" in a very serious way. She was almost to the point of being a little panicky about it. The first few times, I didn't really pay much attention, but as it continued, it definitely caught my full attention. She was having real difficulty knowing if the world was real or if she was suddenly in a dream, in fact, she even went upstairs to check and see if her room was still there! It happened maybe a dozen or so times through the day.

We talked about the feeling she was experiencing. I asked if she was feeling floaty or light-headed (thinking it might be migraine/aura activity) and she said no. I described deja vu and she said it was not that either. She tried to draw me a picture, it showed her with a thought bubble that said, "Am I dreaming?" and at the top in capital letters, she wrote "NOT DEJA VU!" It wasn't elucidating, but it showed how much she was trying to communicate this feeling to me.

I called her neurologist/headache specialist on the following Monday and the nurse called me back and said not to to worry about it if is was an isolated day, but if it happened again, to call them back. It could be a migraine phenomenon or a simple partial seizure. Simple partial seizures are not the "normal" kind of seizure and the main difference is that the person experiencing them stays conscious for the seizure. If KayTar is having these, it is probably either a sensory seizure or psychic seizure, based on her description (click for more information)  A couple of weeks later, it happened to her at lunch at school. Again, it was short-lived and she came out of it on her own, but I still called the neurologist to let her know. She didn't call me back, but the following day I got a call from central scheduling about a new MRI. So that is what we are doing today and why we are doing it, and they will also be getting images of her brain stem for the pulmonologist. If the MRI comes back normal or KayTar-normal, then the pediatrician will be ordering a new EEG...and if it isn't normal, I'm sure there is a set of testing awaiting us behind that door, too.

The pediatrician wrote an order for half-normal saline and D5 to be run during KayTar's MRI, so hopefully we can avoid those labile glucose levels she has experienced after the past two sedations...and I'll be sure to tell everyone NO LR! Fingers crossed for a smooth day today!

I intended to post this before we left this morning, but my browser locked up on me before I could! We are now home from the MRI and it went swimmingly! Everyone listened to my requests/the pediatrician's orders, she was giving D5 1/2NS  as requested, put to sleep with propofol in her IV instead of through the inhalant mask (which she HATES), and it went really well. She had the same nurse anesthetist as her last surgery (when recovery didn't go so well) and she remembered her (and the rainbow IV arm she requested) and it made me feel much better to have her in familiar hands! She woke up wonderfully and her glucose has been GREAT and STABLE! I'm so happy! 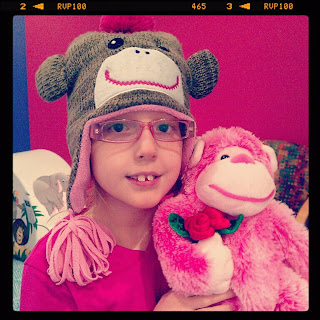 She wore her sock monkey hat to the hospital (which she got loads of compliments on from doctors, nurses, the valet guy, and random people in elevators!) and on the drive in she told me, "If they forget to take off my hat, they will get pictures of my monkey's brain and the report will just say 'Stuffing.'" It cracked me up!

She brought Mrs. Chicks with her, a pink gorilla who shares an affectionate nickname with KayTar's school nurse (which is who gave her the gorilla), because she wanted to feel like she was close to her while she was in the hospital. Mrs. Chicks got an MRI, an IV, and she got to go back to the scan with KayTar...I didn't even get to do that! Thank goodness for loving gorillas who take good care of her when I can't be there. ;)


And my favorite picture of the day...

All in all, it was an extremely smooth procedure and I'm so pleased that the new protocol worked well for her!

So glad it went well!

It took me a second to figure out that last picture. ;)

I'm so glad that it was a good experience for KayTar and hope that you get some answers from this. (Or have you already? I need to go see if I missed something on FB!)

I have never heard of psychic seizures and although I don't want KayTar to be having them, I have to admit that I am very intrigued!