I guess we are going in alphabetical order this week! Yesterday was KayTar's follow-up with Dr. K, her mito/metabolic specialist. Honestly, it was kind of a waste of a morning, because Dr. K is waiting on KayTar's inaugural visit with Dr. N, her new geneticist before making additional recommendations before making her own recommendations. We were supposed to see Dr. N yesterday, too, but the appointment was rescheduled at the last minute because of a family emergency. Now we won't see her until May, so we will follow up with Dr. K in June, after that appointment and our next appointment with Dr. J. Make sense? I did get a bit of clarification on the myopathy thing from yesterday's appointment, basically it just means that she has something metabolic going on that does affect her muscles, which was seen on the muscle biopsy. Nothing more specific than that at this time. Even though we didn't really get anything else out of this particular visit (though the medical student did spend about 30 minutes examining KayTar, so I feel like we were at least donating time to the future of medicine!), it is always nice to see Dr. K and her clinic staff, because they just LOVE KayTar! They call her Little Miss Wa-BAM! because during her first visit, she lifted up her shirt and said, "Wa-BAM!" to show them her g-tube. So yesterday she Wa-BAM!ed everyone in the clinic to show them her new sock monkey TubieWhoobies. She loves the opportunity to put on a little show, so it is wonderful that they enjoy her personality so much! It was also SO nice to be seen without having insurance drama for the first time!! 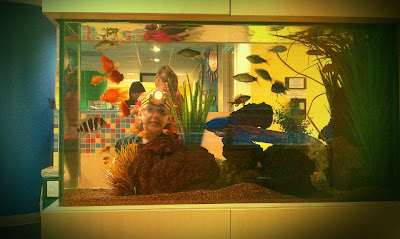 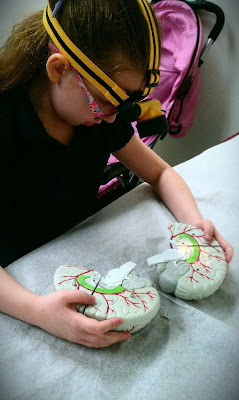 After the appointment, it was time to have yesterday's labs drawn. KayTar started to get anxious and a little sad, so I made a deal with her that if she could stay calm and breathe normally during the labs, I'd get her ANOTHER sock monkey...even though yesterday's sock monkey was supposed to be a two-fer. She agreed and although she DID scream when she got stuck, she remembered the deal and did a pretty good job of calming herself and staying calm during the draws. It was important because on of the tests was a VBG and it is a more accurate measure of oxygenation and CO2 when the person is breathing appropriately when the test is done. I was SO impressed with the phlebotomist. She got KayTar in ONE stick (even though she couldn't use a tourniquet because of the VBG), which is a very rare thing, and she was so kind and chatty with KayTar during the whole process. We had to wait a while in the lab because a courier had to be called prior to the labs being drawn so she could take the VBG in immediately, and KayTar was feeling anxious and asked A LOT of questions about laboratory equipment to keep her mind off of the impending poke. The phlebotomist just kept answering her questions very kindly and patiently. She even gave KayTar a rainbow arm (and purple gloves), like she requested, and then we went and bought a rainbow monkey from the gift shop! 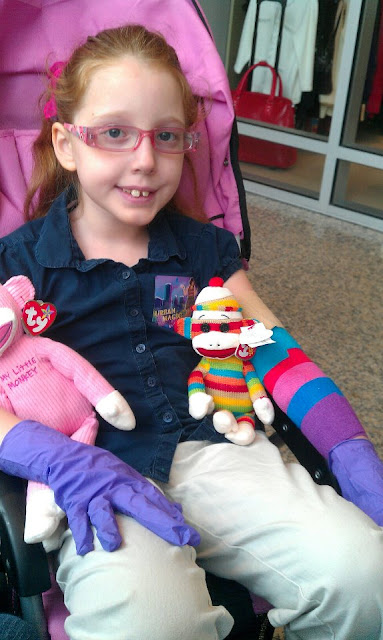 What a trooper! Love the rainbow arm. I hope you guys get some answers soon!

Good to get some clarification on the myopathy portion of the diagnosis (as non-specific as things are, at least it is slightly more specific..) - I love the wa-BAM flair she has. That kid cracks me up!

I'm glad KayTar did so well! And the rainbow arm is cool! Every single time I see a sock monkey, I think of KayTar!

I'm amazed at the number of sock monkeys she's accumulating...but she deserves every one of them!!