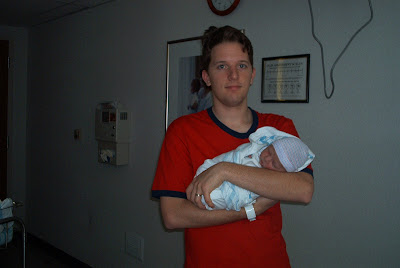 Ten years ago today, after 40 weeks and 5 days of pregnancy and 14 hours of labor, this little guy came along and a couple of married teenagers into parents and made us a family! Looking at him now, I can hardly believe he was EVER that small...but looking at his baby-self, it seems like the years went by in a blink! He has grown to be such an intelligent, handsome, funny, sharp-dressing, unique character and I'm thankful for him every day! It has been a wonderful decade and I can't wait to see what the next one holds for him!

He had a great birthday weekend, I think. It started on Thursday with dinner out at the restaurant with my parents and opening gifts from them. On Saturday, we took him and a friend out to a pizza buffet and let them sit on their own. After dinner, we sang "Happy Birthday" and let him open presents, we were all too stuffed to tackle the cake at that point! Then we went to see Hunger Games again and also let them sit on their own. BubTar was so funny, when the movie was over, he was back by our side in a flash! It was his first time sitting apart from us and I think he was concerned about getting lost in the foot traffic. When we got home, the boys built K'Nex Robots and watched Real Steel into the wee hours of the morning. We got McDonald's for breakfast and the boys continued to build things and play Star Wars games on the Wii. We didn't do a big party this year, because he's getting to the age where he doesn't care about having a big family gathering and he preferred to have a sleepover instead. After his friend went home, he wasn't feeling great so he opted to skip tennis and rest before going to dinner at his grandparents' house that night for dinner of his choosing, fajitas and Boston Cream Pie. It was nice to have a low key, spread out kind of celebration for him this year. I still cannot believe he is TEN. It just does not seem like it has been a decade since I first held that sweet little baby boy in my arms! Happy birthday, BubTar! We love you soooo much!


This is my very favorite birthday memory of him. He was 4 and he wore this tuxedo to Chuck E. Cheese for his party...and he wrote this little ditty. He could NOT be more adorable.

Make a video - it's fun, easy and free!
www.onetruemedia.com
Posted by Kyla at 10:46 PM

Happy NUMBER TEN to BubTar! Time flies by way too fast for these little ones. And then pretty soon, they're not so little. Here's to a great eleventh year!

Wow, a whole decade. He is looking so grown up.

(And what a cute video from when he was 4! It's funny how six years can seem both like a lifetime ago and just a moment ago. Clearly a lot of time has passed for BubTar since then!)

Happy Birthday to him!

That video still melts my heart. I cannot believe he is 10. TEN! He is going to be a teenager before you know it...craziness!

Glad he had a super birthday week!

Wow, what a milestone!! Happy Birthday to Bub!