I usually don't write much about BubTar, since he is getting older and would probably cringe if he knew I was writing about him online, but I want to remember this story.


Yesterday, BubTar was browsing on Amazon and he noticed that there were two sock monkeys either in recent history or suggested items. These were the sock monkeys he and KayTar received from the Easter Bunny in their baskets. (It was an honest coincidence, because I know the Easter Bunny did not get them there, but it just so happened they were there.) BubTar said to Josh, "Hey Dad! Look at these monkeys...those are the same ones KayTar and I got for Easter!" Josh, thinking that BubTar is thinking that we ordered these monkeys, says, "Well, you know the Easter Bunny doesn't MAKE things, he does get them from somewhere...but I don't think he ordered them with our account or we'd notice...it just shows those things based on our browsing habits. I think it is a coincidence." BubTar said, "Whew! Because I was thinking, 'Man, the Easter Bunny is spying on our Internet searches...that's creepy.'" Here we are worrying that he is figuring certain things out and he's on a totally different tangent, worrying that the Easter Bunny is spying on our internet activity. Too funny! 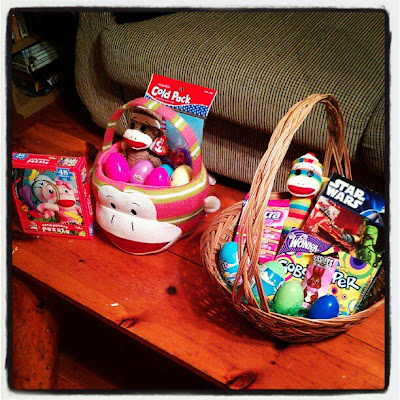 I'm pretty sure that it's Santa who spies on your internet activity. (But maybe he got in touch with the Bunny.)

This is my new favorite BubTar story!