Last night, I surprised KayTar with a special date for the two of us...Disney on Ice! I didn't tell her about any of it until after school, because I made her take an early bath since we would be out so late. She was SO excited, even though she didn't know where we were going. She begged me to tell her WHERE we were going, but not WHAT we were doing, so I did. Evidently she pays close attention to commercials because she said, "Are we going to Dare to Dream?!" I reminded her that she didn't want to know WHAT we were doing, so she didn't press me for answers.

As we got closer to the venue, I told her to start looking for clues (because there were signs all over the place that said Disney on Ice!)...but she missed the first sign. Then she missed the second. Then she missed the big flashing billboard! A little while later, she said, "Oh! I think I saw a clue!!" I asked her what it said and she said, "Oh...it was in curvy writing so I couldn't actually read it...but I think it was a clue!" She made note of little things, like the high percentage of girls in the parking lot and how many of them were dressed in princess clothes. We got all the way inside and through will call without her seeing any signs! After I picked up the tickets, I made her close her eyes and handed them to her. She gasped and said, "Oh! I knew it!!" 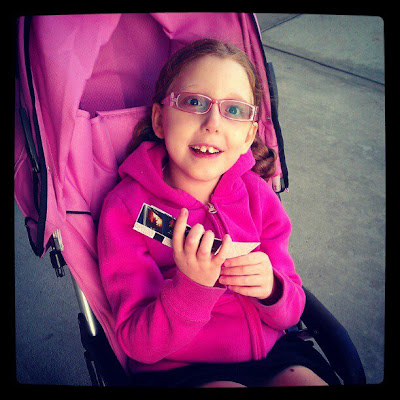 The show was good, she had a great time, but my favorite moment happened after the show as we were waiting for the elevator. A little girl who was 3 or 4 walked up to KayTar and said, "Why are you in a stroller?" KayTar answered, "Because I don't have as much energy as other people. And anyway, you shouldn't judge someone because of how they look, only by what's in their heart..." and she went on for a bit, giving examples from the show even. It was a passionate little speech and I was proud of her for speaking up for herself. The little girl listened, very quietly, and after all of this, she said, "What's judge mean?" It was SO funny! Here KayTar was, trying to seriously educate this little girl about how she shouldn't judge people...but it was a totally wasted effort since the kid didn't even know what judging was! Perfect comedic timing.
My second favorite moment was during intermission, when KayTar (as she is programmed to do) was talking too much and too personally to our neighbors. I said, "KayTar, mind your own business." but her deaf ear was facing me and there was a lot of ambient noise, so she replied, "Mind my own CHRISTMAS?!?"
Life with KayTar...it is always entertaining!
Posted by Kyla at 5:21 PM

That was definitely an awesome moment! Sounds like you guys had a great time!

Mind your own Christmas - classic! She is such a character - and you gotta love the kid who said, "What's judge mean?" LOL! Nolan recently told us, "We need to tic-tac-toe." He meant "tiptoe," lol!

Disney on Ice sounds like a fantastic time - I love those fun outings with the kids (or kid - one on one is the best).

What a fun night for the 2 of you. I love that you kept it a surprise until the last minute. I always cave way too early on stuff like that. ;)

Both stories were hilarious. She could have her own sitcom, I swear.