So, things are still not going quite right for our KayTar and my anxiety levels keep on climbing.

My last post was on Tuesday. Wednesday, we saw the pediatrician and she gave KayTar a thorough neuro exam, which was normal. We all felt a bit better after than. KayTar was in true form and even joked the pediatrician. Here's the joke she used...

Will you remember me in a day?

Will you remember me in a week?

Will you remember me in a month?

You forgot me ALREADY?!

She was super pleased that it worked on the doctor. When she tried it on me the first time, I figured out where it was headed and said, "It's KayTar!" But I sent her to Josh and she got him!

Anyway, Wednesday was fine. Thursday was fine...until it was nearly bedtime and we were talking in her bed and she grabbed her eyes and said, "Oh, I think my eyes are getting sick." It made my stomach drop, because when she used to have her episodes, she would mutter, "My eyes are sick." :( Then she said, "There is a hurricane in my eyes and my forehead!" So I went and got a dose of ibuprofen and gave it through the g-button and not 2 minutes later, she vomited...her feed, her dinner, probably her meds. I tucked her in once she was done, but she moaned in her sleep quite a bit. She cried out around 10:45, and told me her head still hurt, so I gave her acetaminophen. The rest of the night was pretty uneventful.

Friday morning was a little odd, she complained of a tight chest in the morning...so we did pulse ox, listened with the stethoscope, treated with albuterol...and went on with life. Her glucose was fine in spite of the vomiting the night before, thankfully. She went to school, because she seemed much better. I assumed everything was going well because I hadn't heard from her teacher or nurse all day, so I picked her up for PT around noon as usual. As soon as we kept the school building, she dissolved into a sad little puddle. She cried and told me she had a headache earlier and nobody sent her to the nurse...and that she had a tummy ache since lunch and hadn't been to the nurse for that either. I tried to talk to her about it, but she said, "I'm too tired to talk anymore." That is NOT my KayTar. She was coughing a whole lot, too. I called Josh for his opinion and we both decided she would be better off in bed than at PT. I brought her home and tucked her in and she was out in 2 minutes! That is also not typical KayTar.

I emailed the nurse and teacher, because I was a little upset to pick her up in that condition without hearing anything from them all day. I LOVE her nurse, she takes magnificent care of KayTar and loves her to bits, and her teacher is wonderful, too, and they all handle KayTar and her issues well...so I was very perplexed. I sent a nice email, letting them know what happened when I picked her up and asked what happened during the day. At the same time I was sending my email, the nurse was sending me a summary of the day, because she had intended to talk to me when I picked KayTar up for PT, but we had missed each other in the office. It turns out everyone DID know about KayTar's head and tummy woes, but she still seemed functional in both situations and continued to participate in class and didn't complain more, so they just let it be. I'm all for KayTar being in class and not making an issue of little things, BUT right now a headache is not a little thing to me. Clearly, SOMETHING had taken a toll on her that day, as evidenced by her wilting like lettuce in the hot sun when I picked her up. The nurse apologized for missing KayTar's signals and the shape she was in when I got her, but I don't think it was anyone's fault. Sometimes KayTar keeps trucking when she shouldn't and it isn't always evident how poorly she is doing until she hits the wall. The new plan is ibuprofen at the first mention of a headache, regardless of her appearance. If she is doing fine, they can send her right back to class. If it is affecting her, then she needs to lay down in the office and I need to be called. Hopefully, that will clear up any confusion from here on out. We have a great team and I really feel good about how they care for her at school.

KayTar woke up a couple of hours later, sobbing about missing school and saying that she just wanted to give her teacher ONE more hug. She cried so hard she vomited! Sooo, I don't think she's trying to skip school! ;) In an effort to salvage our day (Josh and I both had major school stuff due, in addition to the KayTar drama), we decided to go out to dinner. We figured sitting wouldn't be too taxing for KayTar...but, right after the food arrived she said, "Oh! I'm gonna throw up!" We made a run for the parking lot (it was closer than the bathroom by far). She puked a little by the car (and on her skirt) and then I asked her if she could make it to the bathroom. She said yes, so we hauled it! We barely made it...and she puked all over the wall, the floor, the seat, and also in the toilet. Cleaning up that mess with wet paper towels was not awesome. When we came out, the boys had the food in to-go boxes, and KayTar and I went to wait in the car for them to pay. So much for salvaging the night!

I don't know exactly what is going on with our girl, but I certainly don't care for it. We see too many commonalities with her old episodes and we DO NOT want those to restart. This next week is a really big week between exams and presentations, plus KayTar's ARD and BubTar's birthday...and all I can think about is KayTar. I need this semester to end already, because this sort of distraction is not going to be good for my GPA! Josh and I are both getting a little school burnout and are looking forward to summer in a major way, so this doesn't really help our focus. I guess we have no choice but to muddle through for a few more weeks and hope things go as smoothly as possible. 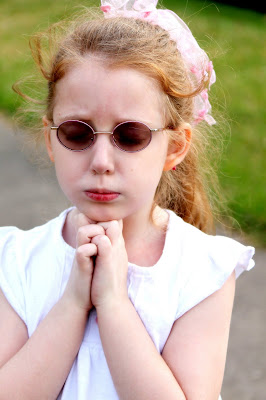 
PPS: Yeah, we're back to superstitions around here.

- Posted using BlogPress from my iPad
Posted by Kyla at 7:01 PM

Oof. I do hope this clears up quickly, whatever it is. Poor KayTar! And I can imagine what a huge distraction it must be for you. (Though I am confident that your GPA will weather the storm!)

You and Kaytar are in my thoughts - you are an amazing mom and I hope this disappears soon!

I hope this semester will pass quickly for you (and Josh too). You're a mama, it's only natural for your children to be at the front of your mind ALL the time and even more so when things like this are going on. Praying for sweet KayTar and for her to feel better soon.