KayTar had headaches three days in a row last week.

Tuesday, she complained of eye pain in the evening.

Wednesday, on the ride to school, she said she was having "pink robot vision" like when the words in her book were flashing red and green a few months back. Then she said she was seeing a pink dot. With her history of horrific, atypical migraine/pseudo-seizure hybrid episodes, it worried me so we dropped BubTar off and headed home for meds. On the way home, she told me that it felt like her heart had moved up to her forehead. She felt a little wobbly on the way into the house. I gave her ibuprofen and Zofran, and put her in my bed in the dark. About 45 minutes later, she called out to me, "I'm fine, when can I go to school?" I had get up and did the highly technical neurological tests of letting her try to read a book and watch the TV to see if it affected her vision again. All was clear, so I took her to school.

Thursday, she had more eye pain in the evening...a "hurricane in her eye" to be more specific. I emailed the pediatrician, but neither of could figure out where this was coming from so suddenly (no illness, no new stress, no sleep changes).

The next few days were fine and I thought we were past whatever it was, but that isn't the way things work. This morning, we found KayTar in the kitchen with an ice pack on her eye. We asked what was up and she said she had another hurricane in her eye. She seemed fine, though, so I gave her ibuprofen and they went to school. I was emailing KayTar's teacher and nurse, when Josh called me to say KayTar was complaining of "colored visions" again...so they turned around and came home. I put her to bed, since we'd already given medication, and she was fine again in about 30 minutes. I waited a while to see if the pediatrician would want to see her, but brought her to school at about 9:30...but she was counted absent anyway. Oh well! Good thing excessive absences are in her IEP, we're definitely over the yearly quota.

I did talk to the pediatrician today, and she thinks we might want to restart Periactin. KayTar was on it as a toddler in an attempt to control her neuro episodes, and later as an appetite stimulant. It didn't ever control the episodes successfully, but it might be worth a shot with these. An appetite stimulant can't hurt either! I also realized that KayTar hasn't had neuroimaging done for 4 years! We may need to get that updated if these persist. I think we're going to see the pediatrician this week to get her looked over...but she seems fine to me, with the exception of these pesky auras and pains! Hope we can get to the bottom of this soon! 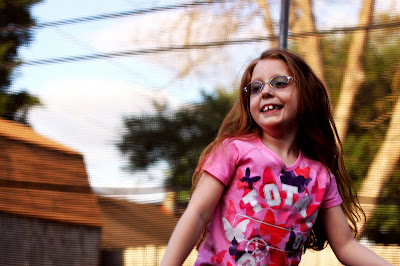 - Posted using BlogPress from my iPad
Posted by Kyla at 8:33 PM

This sounds remarkably similar to what Chance dealt with for a while around age 8. In an effort to not another medication & the potential side effects, I went looking for an alternative and found a study that was done using B2 (Riboflavin) at 200mg 2x/day and 500 or 550mg of Magnesium Oxide that showed really good results. Since he was already on 200mg of B2 as part of the mito cocktail, with our Neuro's (epileptologist & migraine specialist) blessing, we gave it a try. Results were exceptionally good for Chance, making the episodes virtually nonexistent, and much milder when they did happen. A few years later, Madison's CVS changed over to more traditional migraines and we started her on the same regime (why I didn't think to when cvs was our issue I'll never know) and while she had a few more after starting the combo, their intensity was lessened and after two more post introduction, she's had no more!!! I liked that it was more natural, cheap, and the worst aide effect is neon yellow pee....LOL!! I have shared this whenever I can and k ow at least one other family that has seen significant improvement since starting this combo of supplements. Might be something to consider and see how she does. Sort she is dealing with this!!!!

Please forgive all the typo's!!!!! iPhone typing and not previewing = not good!!! Btw, wanted to let you know that we are in town the last week in April. We will get in Easter Sunday and be there till Friday!! Let's definitely plan to get together!!

She gives such interesting descriptions of what she's experiencing! I love that part, but am sorry that you are dealing with more mysteries.

I'm so sorry this happened...just for what it's worth, Tessa still has migraine episodes like that--her vision goes funny, she sees double, and dots and swirles, etc. It doesn't happen too frequently (last time was about two months ago) and rather than medicate her, we just ride them out. Her neuro said that as long as they are not happening once/week or more medication doesn't have to be an option--we've kicked up her B2 as well.