KayTar isn't eating. It doesn't really matter since we have the ability to give her enteral feedings and she gets all of her necessary nutrition that way, but we still do notice and it--ahem--eats at us.

She has never eaten many carbohydrates, but that list is quickly shrinking. She eats no fruits, no pastas, no cereals, no cookies, no breads...well, on rare ocassions she will eat a couple of bites of garlic bread. Up until recently, she would eat chips, soda, icing, french fries, ice cream, croutons (with all of the brown removed)...not exactly HEALTHY, but still food that she was willingly eating. Most of those are out now. Here's the BIG one, she won't drink her Pediasure by mouth anymore. She is frequently complaining that foods are too sweet.

She favors proteins almost exclusively, most of the foods she will eat are greasy meats...bacon, breakfast sausage (that has been cooked and put back in the freezer to cool), chicken nuggets (straight from the freezer), tuna with mayo, pepperoni. She'll also eat powdered parmesan cheese and stage 2 baby food peas and corn and sweet potatoes. That's about it. But in the last week or two, she isn't eating any of that on a regular basis. Today, she ate a snack size bag of chips. Yesterday, she ate a few bites off of croutons at Olive Garden along with a bit of parmesan cheese. The day before that, she ate 1 frozen chicken nugget. The only thing she is taking with consistency is her glass of Miralax water each day.

I'm not sure WHY she isn't eating many of her "safe" foods anymore or why she is complaining about the sweetness of things. I don't know why she won't drink Pediasure anymore. It seems like she's having a bit of a flare up of her GI symptoms right now...her constipation is suddenly causing intermittent problems and her feeding issues have greatly intensified. She's been surprisingly healthy recently, no fevers or URIs (knock on wood), no issues with severe ketosis or hypoglycemia. There doesn't seem to be a cause for this little flare up, but there it is nonetheless.

When we started all this, years ago, at our first GI/feeding disorders specialist visit the doctor told us, "The goal will be to have her eating normally by Kindergarten." At the time, it seemed reasonable...actually, it seemed a little ridiculous. "OF COURSE, she'd be eating normally by Kindergarten, that is years from now!", we thought smugly. Except that Kinder starts in 3 weeks and she's about 98% g-tube fed, and her food list is shrinking, not growing.

Josh and I were discussing this in the car a couple of days ago and he said, "Well, has anyone ever been able to predict the way KayTar would behave?" And she pipes up from the back seat, "Hey! What do you mean? I ALWAYS behave myself!" That sums it up pretty well, I think. Life with KayTar is often fraught with medical issues and unpredictable outcomes, but there are plenty of smiles and laughter along the way. 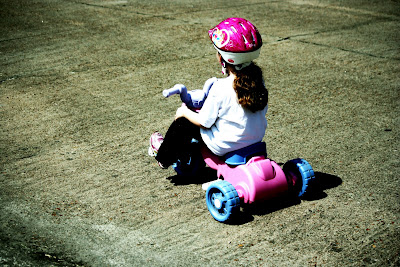 This story begins with the line "towards the end of her life" but you should know right off the bat that I'm not suggesting anything life-threatening or even serious.

Anyway, towards the end of her life my grandmother stopped eating, as the very elderly sometimes do. (She was already dying of cancer.) She said that everything tasted too sweet, which my mother didn't make much of. But when she was admitted into palliative care, they diagnosed her with oral thrush. Presumably the strange flavour was a symptom.

You actually don't have to be that severely immunocompromised to get oral thrush, though it is unusual. I had a similar infection a few years back, with no apparent cause. And who knows what Kaytar's eccentric diet does to her oral flora...

she's just a total little mystery, your girl. I can't imagine the joy and the stress she causes you. She is such a gift and such a puzzle all at the same time.

I'm not sure how to word this, but I wanted to thank you for writing so frankly about your daughter's feeding issues. It made me realize that my food issues were more than just an annoyance, and I'm working on making sure I take in enough calories.

As to this post, I'm wondering if she might be a supertaster? Beyond tasting bitter more strongly, they can also taste sweet more intensely. I'm one, and I remember around her age I went totally off sweet things as well.

She does find her way, that Kaytar. It's so hard to trust that everything is going to be alright though when simple things like eating/pooping are such a challenge. By my-oh-my how good she is at amazing everyone.

As a former peds RN, currents SAHM of 4, and sufferer of difficult to treat atypical migraines (wrote to you about that before) I follow Kaytar with great interest. Would it be a stretch to say that she's self treating herself now with a pseudo-ketogenic diet? Kids are so very smart and often know more about what they need than we do.

Anxiously waiting for the next installment. She is quite a kid. Your family is wonderful! I thoroughly enjoy coming along for the ride and learning on the way. Thanks for continuing to share.

When I read this, my first though was typical growth issues. Now, I've been reading long enough to know that NOTHING about your dear daughter is typical, but, I know from watching my own kids who are nothing more than picky eaters, sometimes, they don't eat much and others they eat EVERYTHING and then some. Ride it out, but trust your gut. Good luck!

Kyla, you have one feisty little chicklet there.

She sounds a lot like my daughter - pickiest eater on the planet. And I don't have a G-tube so I just load her up with vitamins.

Don't know what to say, but I know you guys will get through this like you have everything else. Yay for the G-tube, right?

That quirky KayTar! That is quite interesting that she finds a lot of foods to be too sweet and that she eats pretty much exclusively eats proteins. Hopefully one day in the very near future she'll at least start eating her "safe" foods again.